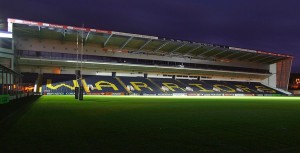 The new pitch will be laid at the Sixways Stadium between June and August in time for the start of the new Premiership season. According to the club the pitch - produced by Italian firm Limonta Sport - is the first in the UK to feature an organic infill rather than rubber crumb.

It will sit on top of a rugby-specific shock pad, and will permit greater usage for the elite playing staff, academy players and community rugby, as well as reducing maintenance costs.

"Our stadium pitch is the single most under-utilised asset in the club, currently being used fewer than 100 hours per season," said Worcester chief executive Jim O'Toole. "The structure of our existing playing surface means that we have to allocate eight to 10 weeks per summer break to refurbish it, thus removing the possibility of summertime playing usage or commercial activity.

"This development not only allows us to play more rugby at all levels on our biggest physical asset but also allows us to establish new commercial revenue streams such as concerts, festivals and other non-rugby events."

The new surface will be maintained after every 10 hours of usage, requiring the club to hire additional staff to deliver the maintenance.

Worcester Warriors becomes the third club in the top flight to lay a surface that is not 100 per cent natural grass after Saracens and Newcastle Falcons.

The move comes just after the publication of the Rugby Football Union (RFU) and the Rugby Players' Association (RPA) Professional Rugby Injury Surveillance Project report, which revealed that the bodies would deepen their scrutiny on artificial pitches, and the extent to which coaching and medical staff hold players back from competing on non-natural surfaces.