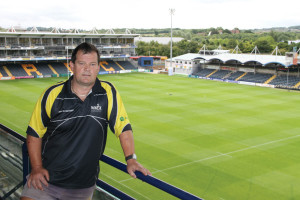 Worcester Warriors' head groundsman Martin Knight says his passion for the job started when he was just 12 years old.

He recalls a nets session at his cricket club would lead to an obligatory 20-minute stint on the roller to prepare the wicket for the weekend.

Knight, who now heads up a team of two full-time groundsmen at Warriors, has no regrets about his chosen career.

Last winter Knight and Stuart Lambert won the professional rugby union grounds team of the year award for their work.

"I love working outside in the fresh air," said Knight. "It doesn't really bother me if the weather is cold because you can always put on plenty of clothes to keep warm. I could never go back to working inside now. It's nice being outside all of the time."

Knight's formative role at his cricket club soon graduated from sitting on the roller to mowing the outfield.

He said: "When I was 17, I worked in a bank but I was still working at my local cricket club in my spare time. Then I left the bank, became a full-time groundsman and have not regretted it since."

In addition to the Warriors' stadium and training pitches, the groundsmen look after six senior and 13 junior pitches plus an indoor third-generation synthetic surface training area - a total of 50 acres.

See the rest of the article on the following link:- Malvern Gazette