Aberdeen Football Club's new £50 million ground is a step closer after it awarded the first in a series of construction contracts for phase one of the new stadium at Kingsford, near Westhill. 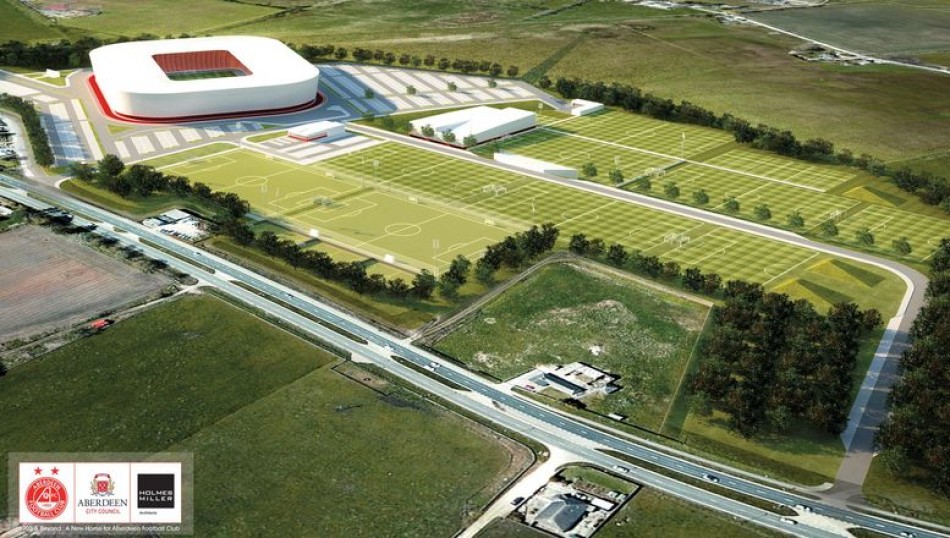 The club, which finished second in the Ladbrokes Premiership behind Celtic and ahead of Ranger in third place, has awarded a contract to McIntosh Plant Hire for the earthworks and ground remediation in preparation for the construction of the community sports hub and football training facilities.

It is anticipated that the club will relocate to the new stadium - to the west of Aberdeen - from current ground Pittodrie in autumn 2019.

Aberdeen's ambitious plans for the new 20,000-seater stadium and training facilities were given the green light by Aberdeen City Council in January after a series of delays due to objections, including from the No to Kingsford Group which has argued the development will create parking problems and contravenes the local development plan. Objections were also lodged by Aberdeenshire Council.

McIntosh, a local firm, will prepare the site, much of which was formerly used as landfill, to allow construction to begin later this summer. Phase one, valued at around £10m, will include the construction of the training pavilion, groundsman's accommodation, three professional training pitches, two 3G pitches and two grass pitches.

Established in 1950, the family business provides a range of services to the local construction and oil and gas sectors including civil engineering, plant hire, heavy haulage and storage warehousing. Founding directors Bert and Moira McIntosh are lifelong supporters of the Dons and Mr McIntosh said it was a "privilege" for the firm to be involved in the project.

"The commitment by AFC to providing much-needed space and facilities for the community makes the whole project even more compelling and something we are proud to be part of," he said. "We hope to get work under way as soon as possible and will be securing the site in the next few days."

Aberdeen FC has issued tenders for various elements around the construction of phase one and has pledged to appoint local firms wherever possible. Contracts for the overall project are anticipated to safeguard or create around 150 jobs initially.

Project director Raymond Edgar, said described the McIntosh contract award as "another major milestone in our journey towards facilities from which the club and the wider community will benefit". Mr Edgar said: "The appointment McIntosh Plant Hire underlines our commitment to using local suppliers and local expertise which will safeguard jobs and boost our economy."

A principal contractor will be appointed in the near future with contracts also being let for sub-contractors to carry out the various work packages which include roads and sewers, construction of the pavilion and groundsman's accommodation, formation of the pitches as well as all electrical, plumbing, heating and ventilation work.

The club has played at Pittodrie since 1903.

You can read the original article from The Herald HERE