A £1 MILLION price tag has been put on urgently needed drainage works at 26 flood-prone parks and sports pitches across the Capital. 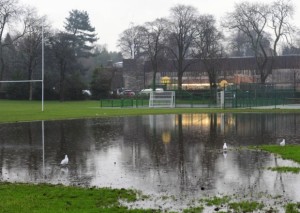 Around £500,000 has already been spent on improving 12 green spaces including the Meadows, Inverleith Park and Leith Links.

But work is needed at a further 14 sites - among them Harrison, Union and Braidburn Valley parks - leaving the city facing an additional bill of around £500,000 to clear the backlog.

Fresh cost estimates come as sports club leaders warn parks and pitches have too often been rendered completely unusable during bad weather because they cannot drain properly, leading to scores of delays and cancellations.

And while acknowledging the scale of the required investment at a time of relentless budgetary pressure, they have called on environment bosses to fast-track additional parks spending.

Joe Smith, president at Edinburgh Northern Rugby Football Club, who train at flood-hit Inverleith Park, said completion of drainage works last year had made a huge difference to the fortunes of his team.

He said: "The pitches were a total mess - in fact, there were no games for a whole year prior to the introduction of the drainage system. There was an area by the tennis courts that looked like a lake.

"We had no call-offs at all the year immediately after [the drainage system was introduced]. We've had a few since then but they have typically been called off the night before and by the next day they have actually been quite playable.

"It's worth it to have pitches you can actually play on."

Kevin Hanratty, treasurer at Edinburgh United FC, who play home matches at Paties Road in the south-west of the city, said his club had been hit by as many as five cancellations since the end of last year alone.

"We've had four or five call-offs since Christmas - the pitch definitely needs work," he said.

"[If the drainage work is done], it will allow more games to be played and it will improve the quality of football, which is what it's all about at the end of the day."

A council spokeswoman said: "Due to high levels of rainfall, many of Edinburgh's parks suffered extreme and lengthy periods of flooding back in 2012.

"At the time the council identified 26 parks and pitches that required priority drainage works, and we are now almost half way through the improvement programme.

For the full article from Edinburgh News, click here.