I guess that most of you will have heard of Bayer Leverkusen Football Club from their numerous Champions League and UEFA cup ties.

But, I wonder how many realise that they are owned by Bayer, part of the same company as Bayer Environmental Science, the leading chemical company whose products include Chipco Green, Spearhead, Dedicate, Merit Turf etc.

Leverkusen is in Germany's North Rhine-Westphalia region and is home to the headquarters of Bayer ES.

The Bayer Leverkusen Sports Club was formed in 1904 when a group of 170 employees petitioned Friedrich Bayer and Co. to support the initiative. Bayer 04 Leverkusen Football Club, to give them their correct name, are the flagship branch of a still huge and thriving sports complex.

Today, Bayer's sports clubs in Leverkusen alone have a membership of around 18,500. Three of the company's other German plants - in Wuppertal-Elberfeld, Krefeld-Uerdingen and Dormagen - also have their own sports clubs. Altogether, there are twenty-seven sports clubs with over 50,000 members.

Bayer Leverkusen won the UEFA Cup in 1988 before going on to win the German Cup in 1993. After finishing second in the Bundesliga on various occasions the club reached the UEFA Champions League final in 2002, losing to Real Madrid 2-1, a further highlight in the history of the club.

As with any successful professional club they needed to move with the times. To help achieve this the BayArena stadium has had a major facelift.

The main aim was to increase the capacity of the stadium (now 30, 000) whilst, at the same, time providing new facilities for players, staff, VIP guests and members of the press. The old West Stand was replaced by a brand new, state-of-the-art building along with a total new roof design that provides better protection from the weather. 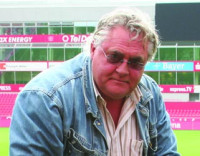 Laurence Gale and myself were given a tour of the new stadium where we met up with Dieter Prahl, the stadium's Head Groundsman. Dieter has worked at the club for more than forty years.

He started his career in agriculture and served his apprenticeship on a farm. He is responsible for overseeing all the work at the main stadium.

Dieter has over thirty staff working at various grounds around the city, looking after fourteen football pitches and various other sports facilities.

The stadium pitch was reconstructed, changing from the old, heavy soil based pitch to a 70/30 sand/soil rootzone profile. The pitch now has undersoil heating and a fully automated pop up watering system. Dieter employs two full time, qualified sportsturf groundsmen at the BayArena.

The pitch is cut with a combination of ride on Toro triple and pedestrian mowers, maintaining a sward height of 25mm in the summer, 28mm in the winter and 22-23mm for Champions League matches. Cutting continues on a daily basis during the growing season (April- September). The pitch is usually mown in alternating directions for each pass, but the final cut before a game is across the pitch to aid the officials with offside decisions.

Dieter applies a granular feed on a little and often basis along with any other micronutrient requirements, with a focus on K²O (potassium oxide) and Mg (magnesium) and little use of phosphor (P). Regular core samples are taken to monitor root depth and condition of the soil profile.

The pitch is dew brushed every morning along with recording soil temperatures and moisture content.

A heavy aeration programme is instigated to reduce compaction, encourage deeper rooting and reduce the chance of any black layer forming.

Dieter uses a combination of hollow and solid tines when aerating, using different sized solid tines throughout the playing season and hollow tines during any renovation periods. He has had his own tines manufactured, using special hardened steel, that last up to four times longer than the manufacturer's tines.

On the high wear areas, like the goalmouths and touch lines, heavy machinery is avoided and small pedestrian mowers, as well as hand aerators, are used to reduce compaction.

The pitch is topdressed twice a year with a straight sand dressing (grain size 0.5-1mm) using around 29 tonnes per application.

The pitch is oversown 2-3 times a year with a regeneration mixture of 70% German Weidelgras (Lolium Perenne), 30% Wiesenrispe (Poa pratensis) as and when required.

On the training ground, adjacent to the stadium, Dieter also has a turf nursery which has been grown using the same mix. This allows him to harvest turf for pitch repairs when required.

The pitch is usually mown and marked out the day before the match. As with many clubs these days, the pitch is watered before kick-off and at half time to help produce a fast surface.

Dieter has perfected his own line marking fluid and his lines seem to last longer than current commercial paints - however, he was not forthcoming about what his 'magic potion' consists off!

The professional squad occasionally use the stadium for training in the run-up to the 'big matches', however, like most stadiums, it is also used for a variety of other events throughout the year such as concerts, cup games and exhibition matches.

As with any new stadium it will be a case of learning how to manage the pitch in its new environment - the new roof and stands will have altered the light levels and affected the airflow.

The BayArena is certainly an impressive stadium and it was interesting to see how it was being managed. Dieter and his staff will have some testing times in the coming years. It will be a steep learning curve to adapt and develop the appropriate maintenance regime in the new environment. Dieter already has full records of daily temperatures and rainfall, so will be able to ascertain changes in the new stadium.

I am sure, with over forty years experience to call upon, he will cope admirably with these new challenges.

I would like to thank Bayer's Paul Clifton and James Hadlow for organising this visit the stadium. It was a rewarding experience to see this facility and to meet Dieter and his staff.