1 Working on the bonnie bonnie banks of Loch Lomond 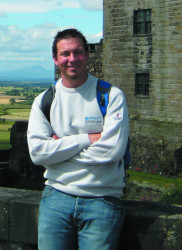 As well as accepting European students into the States, Mike O'Keeffe and his team at Ohio State University also place American greenkeepers in Europe. Brent Downs is one such 'yankee' and here he talks about his experiences at the stunning Loch Lomond Golf Course

My name is Brent Downs. I'm a 25 year old American greenkeeper doing an internship at Loch Lomond Golf Club in Scotland for the summer.
I arrived in early April through The Ohio State Program (www.top.osu.edu). I heard about the programme from Mike O'Keeffe, the Director, as he sends students from the States to Europe every year.

Mike and his staff helped me get my visa, health insurance and advised me on flights. It was very easy with his support. I intend to stay here until mid-September. I've been a greenkeeper now for seven years. I started out at a small local course in my home state of Indiana, U.S.A. and worked there every summer for five years while I was studying at Purdue University. I enjoyed it so much I decided that this was the career for me. I began studying turf management at the same time as I was working on a biology degree. In the summer of 2006 I worked at the Atunyote Golf Club in Vernon, NY which hosted two televised PGA events: The PGA Professional National Championship and the B.C. Open.

I graduated with both of my degrees from Purdue in December 2006 and decided that I wanted to improve my knowledge of the turf industry and maintenance techniques in an international setting, so I contacted Mike and here I am on the bonnie bonnie banks of Loch Lomond - never have the words to a song rung so true.

The first thing that caught my eye about Loch Lomond is how visually stunning it is. Half of the holes border the Loch, and the other half are set against the backdrop of the foothills of the Scottish highlands. On a sunny day, I cannot imagine too many golf courses being more scenic. 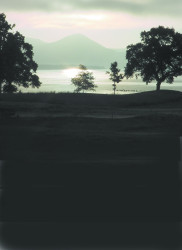 The day starts at Loch Lomond at 5:30am. In the morning, I am usually placed on one of the mowing runs (greens, tees, approaches, fairways, or rough) or on the bunker rotation. Greens, tees, and approaches use walk-behind mowers, fairways are mown with triplexes, and rough is mown with 5-deck rotary mowers.

On the bunker rotation, all bunkers are raked, but a certain amount of bunkers are flymown and edged every day, so that approximately once a week each bunker is manicured. Some of these jobs also include other tasks, such as: raking greenside bunkers, trimming sprinkler heads, measuring clippings, and divoting par 3 tees. These tasks generally take up most of the morning.

In the afternoons, I usually work on one of the projects the course has lined up for the day. These can include: turfing thin areas, overseeding, fertilising rough, trimming sprinkler heads, plugging out weak spots in greens, installing drainage sumps, and divoting tees and fairways.

Between these jobs, we also rotate through a list of tasks that include washbay duty and emptying the bins, etc. in order to keep the work space tidy. Loch Lomond is an Audubon* sanctioned course, so there is a huge emphasis placed on health and safety and being environmentally friendly. Grass clippings are turned into compost, chemicals are minimised and vegetative buffers are used for risk areas, and the washbay recycles water.

Since it is a parkland style course designed by two Americans (Weiskopf & Morrish), course agronomics and maintenance at Loch Lomond do many things similar to top U.S. courses, but there are many differences as well. 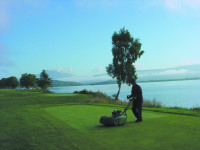 The first thing I had to adjust to was the use of the metric system of measurement for chemicals and heights of cut. This transition was made a lot easier for me though due to Ken Siems, director of agronomy, who is Canadian-born and American-educated, so he works in both systems and the rest of the crew has learned from that.

The grass species selection at Loch Lomond is also different from what I'm used to in the Midwestern U.S. due to the high volume of colonial bentgrass and some fescue used. Due to the climatic differences, generally the only place you see fescue in the Midwestern U.S. is grassland rough because it can have trouble tolerating traffic and warm conditions.

The greens at Loch Lomond were completely re-built in 2000-01 to USGA specifications and were originally sodded with a creeping bentgrass turf. They are overseeded with fescue and colonial bentgrasses and native perennial poa annua is invading. With the local wet, humid and overcast climatic conditions, managing a pure stand of bentgrass has proven to be very difficult taking into consideration greens sizes, volume of play and, most importantly, environmental conditions.

Managing a mixture of grass varieties provides our members with a superior putting surface year round versus a pure stand of creeping bentgrass in this unique environment. The current greens grasses can present different greenskeeping challenges in terms of recovery due to the fact that creeping bentgrass in moderately warm conditions is a very aggressive grass that recovers well, whereas colonial bent/fescue does not spread as well. 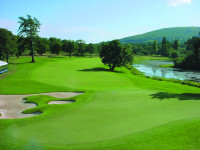 Loch Lomond has addressed this with overseedings and spoon-fed fertiliser rates to keep the grass healthy and recovering. When I asked about pests and diseases, I was told that they are actually pretty rare on the site - a bit of a shocker because, back home, we get dollar spot, brown patch, summer patch, and pythium blight. Ken said in the winter you might see Fusarium patch, and through the summer they treat for Fusarium patch and anthracnose
Broadleaf weeds are also very rare, (another big problem back home) and selective herbicides are rarely, if ever, used.

The only herbicide used is the non-selective glyphosate Round-Up, in the woodlands areas. There have been some leatherjackets and grub problems in the insect realm they spray for but, other than that, the main sprays are fertilisers and Plant Growth Regulators (PGRs), which is the way they prefer it as the UK has much stricter chemical laws compared to the U.S., and the general Integrated Pest Management (IPM) theory of the staff.

The main challenge facing the greenkeeping staff is drainage. Loch Lomond takes 2000 mm of rain a year (80 inches to me) so there certainly is a wetness issue on the site! I found out early on that Ken likes to keep as many projects in-house as possible. I assumed that drainage work was outsourced. That was not the case. The greenkeeping staff carry out the work every winter.

Throughout the last ten years, Ken has led a programme of sandcapping, pipe draining, and sandbanding to the point where I can honestly say the course has the best (and most complex) drainage system I have ever seen. The objective is to transmit the water off the surface as quickly as possible. Even the rough is drained. In my area of America, the rain tends to come in heavy, short bursts and in much smaller annual quantities.

Therefore you see USGA drainage on the greens and tees, tile drainage in low spots on fairways and roughs, and the rest is all generally surface drainage, which is much easier to manage.

Loch Lomond generally has the same crew hierarchy as a U.S. course. The crew, especially the full-timers, are made up of guys who eventually want to go on to be deputies and supers themselves. In the U.S., more of a premium is placed on education and, usually, students with a degree in turf who have worked summer internships take the assistants positions and then move up to become head men. 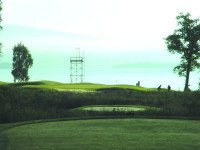 This appears not to be the case in the UK, where more of a premium is placed on experience. Most of the guys I have met have done a short certificate programme or taught themselves in their spare time, and then worked their way through the ranks to move into management positions.

Many things are very similar though. The same types of mowers for different cuts of grass are also used on the U.S. courses. The heights of cut are also very similar. For example, fairways, tees, and approaches at Loch Lomond are all cut at 10 mm, which is 0.4 inches which is right in line with what a U.S. course would do. Fertilising and other cultural practices are also very similar. Greens are spoon-fed small amounts of liquid fertiliser, and tees and fairways are liquid fertilised at higher rates less frequently.

Granular slow-release fertiliser is used in rough. Other cultural practices such as topdressing, verti-cutting, and solid tine aerification are also carried out in the same manner and frequency as a U.S. course. As you can see, there are many similarities and differences between the maintenance styles.

As far as my relationship with the crew goes, though, there was a wee bit of language barrier due to accents and slang terms at first, I took the 'yankee' jokes well and I can honestly say that I have made several friends here that I hope to keep in touch with for a long time. They are an excellent, hard-working crew and it is because of them that Loch Lomond is a top fifty course in the world, with one of the most sought after tee times.

Since 1995, Loch Lomond Golf Club has played host to the Scottish Open held on the European PGA tour. This is a very prestigious tournament that attracts many of the top players from all over the world. This year, France's Gregory Havret defeated Phil Mickelson in a playoff to capture the title. 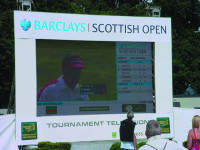 Bunkers and greens were the most intensively maintained areas during the week of the tournament. All bunkers were hand-raked twice a day, and a vibratory whacker plate was used to keep their firmness. Greens maintenance was based completely on speed. A green was mown, and then a stimpmeter was used to check its speed. If it was slower than the desired speed, it could be mown and rolled multiple times in order to obtain the desired speed. This helped keep the greens as consistent as possible for the players.

In the end, the players raved about the beauty and conditioning of Loch Lomond Golf Club and the tournament was viewed as a total success by all. 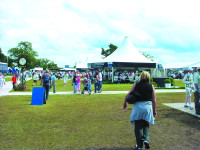 In mid-September, I hope to leave the bonnie banks and head to Sydney, Australia for a greenkeeper position at The Australian Golf Club, host of the 2007 MFS Australian Open in December. I'll be there for approximately five months. After that, I intend to return to the U.S. for a management position at an American golf course with a lot of new skills and many memories I'll never forget.

I want to thank Ken and Dave Cole, Course Superintendent, and their crew for putting their faith in me and for being a leader in taking on American interns. I am a firm believer that we can all learn from each other. I hope more Americans will trust Mike O'Keeffe and come over to The British Isles for an experience like I've had this summer.

*Audubon certification for golf courses is a programme of golf courses establishing a plan and carrying out maintenance practices that keep a course environmentally friendly. One example of this is the vegetative buffer zone that separates Loch Lomond from the golf club. This helps prevent things like golf course grass clippings etc., from going into the Loch. There are varying levels of certification. Loch Lomond Golf Club are Audubon Cooperative Sanctuary Programme Certified.