Complete peace and quiet, broken only by birdsong, awaits golfers at The Rolls of Monmouth, purpose built as a championship course in 1982. The idyllic 6733yd par 72 course sits in the grounds of a stunning manor house once owned by Charles Stewart Rolls, co-founder of Rolls Royce, and the outbuildings house the pro shop, offices and clubhouse, while the mansion itself hosts functions and events.

The feeling of splendid isolation is completed by the vast acres of forestry that surround the course. The back nine holes were carved out of the estate's farmland, whilst the front nine are surrounded by great swathes of open parkland. A dense, wooded hill, populated with deer, divides the two.

"Greens are constructed from loam and sand over a stone and drainage layer, in the older style rather than to a spec," explains head greenkeeper, Mike Powell, "They were originally seeded with Pencross, but it has been hard to keep the levels up, although recently we have been overseeding more to get these creeping bents back." 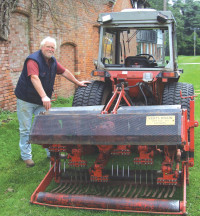 With a natural feel to the course and the rich wildlife population part of the attraction for many members, Mike manages the turf accordingly.

"There is minimal chemical use - we weed kill every two or three years, using a contractor other than on the tees and greens. Feeding is also light, mainly based on seaweed products and topdressing, adding nitrogen only when necessary. An autumn/winter feed can last all year round."

Water runs off the clay based soils up to a point, and Mike comments that the greens stay in use year round, although he admits that winter traffic is low, and a larger membership would take a greater toll on the course. "We have a lot of societies playing the course and the winters tend to be a lot quieter," he explains.

The current greens committee has supported wider use of aeration, and Mike comments that this has helped reduce disease levels considerably, again cutting the chemicals needed. He uses one of the oldest tools in the club's armoury, a 1991 Verti-Drain 105-145 model on a monthly basis, fitted with pencil tines to relieve compaction and get air and water down to the turf roots.

"The Verti-Drain has been exceptional, totally reliable, even though it is quite ancient now," he laughs. "We also sarrel roll once a fortnight - this doesn't go as deep and minimises disruption to play." 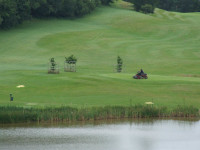 Hollow coring is carried out annually, and Mike says that, although this is often done later than the ideal timing due to pressures from society golf bookings, it still proves effective.

He also tends to work in four to six holes at a time rather than do the whole course, also to minimise disruption to play.

"The course is at its best early and late in the season but, where possible, I try to work with the turf's needs rather than follow a set programme, and I don't water excessively," he comments. "The irrigation system is fairly antiquated and only waters the greens anyway, so many operations are governed by rainfall. We avoid cutting tees too short, and topdress when there is some moisture in the ground."

Tucked in below the forestry, The Rolls of Monmouth is in a frost pocket, but Mike is philosophical about this. "It works both ways - frost kills disease. You want to be able to let the golfers play while still protecting the greens in frosty conditions." 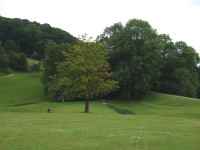 The hard winter had a relatively small impact on the course compared to many, although Mike recalls that, as the frost began to come out of the ground, the greens were soft on top but still frozen seven inches down.

"We closed briefly, but the members were supportive, and the greens came out of the winter well, especially when you consider the dry spring," he says.

The influx of golfers to Wales during 2010's Ryder Cup proved a mixed blessing for Rolls of Monmouth, like many clubs in the area.

"The course was very busy yet, because it was so wet, the greens were flooding and we were constantly squeegying to keep them open," he recalls.

A recent purchase which has made a significant difference to the course is a Dakota Turf Tender, Mike reports.

"We can topdress every month lightly; it has little impact on the golfers and has helped the greens a lot," he explains. "When the rain came in July we pencil tined and then gave them a light topdressing, and they are now looking very good." 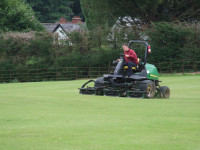 Greens are cut every other day to 4mm with a pair of Toro greens triples, and rolled with vibratory rollers once a week to maintain green speeds, although Mike comments that the undulating greens play better if they are not too fast. Groomers are put in and dropped out as required, and a verticut reel is used occasionally.

A John Deere 3235C fairway mower takes care of the vast expanses of semi-rough, while trailed gangs are used on the rough.

"The gangs follow the ground contours well, although the downside is that you don't get the finish of a deck mower. There's minimal long rough and this is cut once a year for hay."

Tees and approaches are kept in check with a Toro greensmower fitted with tees units, whilst a Toro Sidewinder is used on the banks and bunkers.

"We have not gone for set agreements, preferring to work with local dealers Frank Sutton, Ted Hopkins and David Evans Agricultural," comments Mike. "We have a good relationship with John Deere and Toro and we like to get the best deal." 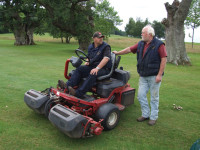 He admits that he likes to get the maximum working life out of machines and doesn't particularly enjoy spending money for the sake of it. "Our manager, Linda Kedward, will source any machinery that we need, but I prefer to have a small fleet of good quality machines."

Mike has a team of four greenkeepers - his son Gareth, Mark Timmins, Steven Baldwin and Andrew Parry - and says that a young team, working to the same ethos as the head greenkeeper works well.

"They can work through their NVQ levels, and then have qualifications based on experience. It's important to work as a team and for the head greenkeeper to take responsibility rather than blame individuals if something goes wrong," he comments.

Future strategy for the club is centred around maintaining its natural look, allowing growth along the lakes and streams, although a large lake below the mansion was set to be dredged to control overgrown reeds at the time of our visit.

A new tree planting scheme will replace old oaks which have been stricken by disease, and retain the wooded feel of the course.

"The look of the course is very much part of its appeal, and that is something that we are very keen to encourage whilst keeping the greens close to tournament standard at all times," Mike confirms.