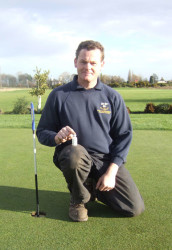 Selby Golf Club in North Yorkshire has celebrated its centenary in 2007, and over the years it has gained a reputation for course quality, which is appreciated by its 750 members and visitors.

Renowned as an inland links course, it overlies a sand band, giving superb drainage characteristics. The club invariably remains open for play 365 days a year, and locals know that, whatever the weather, they are guaranteed a round of golf at Selby.

However, earlier in 2007, Head Greenkeeper and Course Manager, Gordon Street, realised that five newly laid greens and a putting green were not of the same standard as the rest of the course. During reconstruction, the old turf and soil had been removed and replaced with a new, sterile rootzone that provided insufficient nutrients and beneficial bacteria for vigorous grass growth. The turf became yellow and has a poor playing surface.

Gordon called in Mark Atkins of Soil Harmony, a division of Charterhouse Turf Machinery that uses specially formulated biodynamic materials to invigorate rootzones. Mark and Gordon agreed on an improvement programme to run from May to September, incorporating some of Soil Harmony's special treatments. Soil analysis was carried out and a corrective formula was applied to the problem areas on the course.

"The programme addressed imbalance and deficiencies in some rootzone areas, as well as excesses in some others," says Mark. "The aim was to balance nutrients and pH levels, optimise drainage rates and reduce reliance on pesticides, while reducing management costs. The strategy was devised following a thorough investigation of particle size distribution, sand fractions, and silt and clay content. From this, correct application rates were determined in relation to indigenous grass species and local climate."

A nitrogen boost was given using N-Fusion because of Its environmentally friendly properties and because the course has been built on a sand band where things tend to percolate through the ground and get into the water system easily. Concerns about harmful pesticides infiltrating through the ground were no longer an issue as N-Fusion proved to be the perfect, environmentally friendly solution for problem turf in situations like Selby Golf Club's.

Another Soil Harmony treatment applied to re activate the microbial soil life was Bios Turf Tonic and Bios 4/20. Bios Turf Tonic contains a multitude of soil nutrients both simple and complex, all devoted to feed beneficial micro-flora and fauna. It is biologically active with the ability to chelate nutrients increasing their availability, and to detoxify contaminated soils. Bios 4/20 is a biostimulant and is brewed prior to the application of live microbes and works by making nutrients more available and enhancing nutrient uptake of the plant.

"The programme has been a great success," says Gordon Street. "The greens now have a fantastic colour and the surfaces are immensely improved. We have had a lot of rain this year and normally this would flush out nutrients, but this has not happened. Soil Harmony has worked wonders and I will definitely use them again in 2008."