In partnership with Newcastle City Council and thanks to an investment of over £9.5m from the Premier League, The FA and Government's Football Foundation, construction work has begun on two new multi-million-pound community hubs in Newcastle. 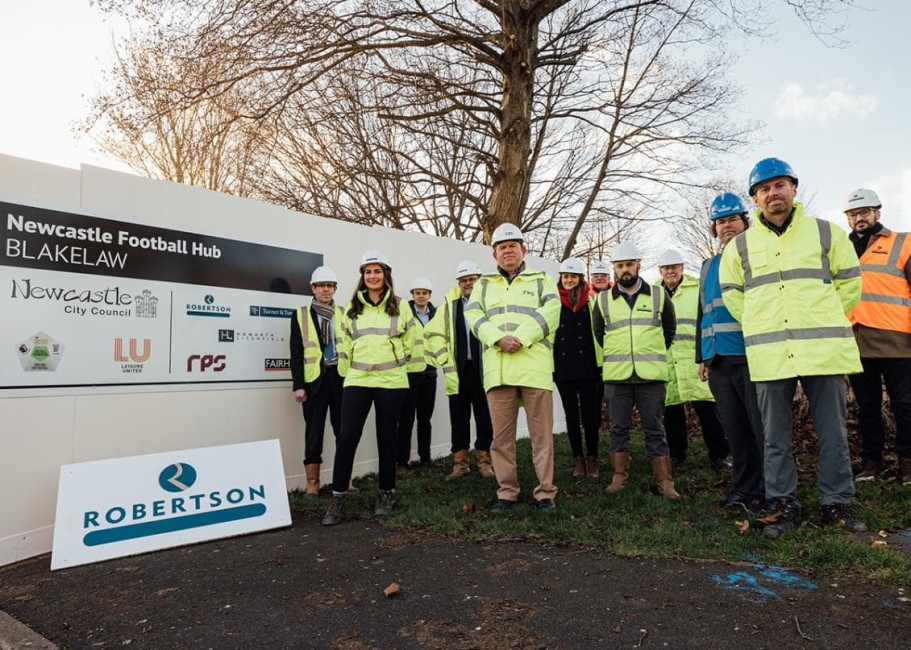 Identified in Newcastle upon Tyne's Local Football Facility Plan as priority projects, the two new Hubs will be home to state-of-the-art facilities at Blakelaw Park and Bullocksteads Sports Ground. Combined, the sites will serve thousands of children, young people, adults and elderly residents from across the North-East of England.

Representatives from Newcastle City Council, the Football Foundation and partner clubs came together at each site today with the main contractor Robertson Construction Group and the project team led by Turner and Townsend Ltd to celebrate the start of works.

At Blakelaw Park, the works will include installation of two new small-sided 3G Football Turf Pitches (FTPs) and a Multi Use Games Area (MUGA), alongside the replacement of an existing full-size 3G FTP. A new two-storey pavilion will house new changing rooms, a community cafe and education room alongside a 60-station fitness suite with studio. The site improvements will also include additional parking and a new children's play area. The facility that will become a training home to two partner clubs - Blakelaw Juniors and Montagu & Fenham Juniors.

The works at Bullocksteads Sports Ground will comprise of two new floodlit 3G FTPs alongside a new two-storey pavilion with changing rooms for six teams and two officials, a community café, and meeting space. The first floor will feature a health and fitness club with a 70-station gym, spin studio, and multi-purpose studio. The site will boast seven grass pitches (including one rugby), additional parking, and a children's adventure play area. The project will provide a home for three Partner Clubs - Newcastle City Juniors, Newbiggin Hall Juniors and the Panthers who are Newcastle's only LGBTQ+ football Club.

Both sites are set to become significant venues for football participation in the City, particularly for mini soccer and junior football, with over 100 games expected to be hosted on a typical weekend in partnership with Northumberland Junior Football League. The project is built on strong collaboration with local partners to ensure the new facilities are as inclusive and welcoming as possible for their local communities. The youngest of players will be able to experience the game for the first time through initiatives such as girls Wildcats whilst encouraging football as a game for life for older players through schemes such as walking football. The Hubs will also host a range of programmes off the pitch, including education courses by Newcastle United Foundation and Newcastle Falcons Foundation.

The sites will be operated by the charity Leisure United which will ensure all surplus income re-invested back into grassroots football in the City to help make the game more sustainable.

Robert Sullivan, Chief Executive of the Football Foundation, said: "It's fantastic that works on these brand new facilities have started. These facilities will undoubtedly provide a boost for grassroots sport in the North-East. Funding from the Premier League, The FA and the Government, through Sport England, is playing a vital role in making the project a reality."

"These facilities not only act as excellent physical and social outlets for communities but also provide new jobs - during construction and in the years to come, with people needed to support sites in delivering safe and positive environments for any user."