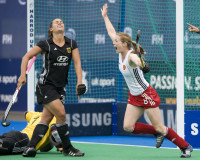 The Samsung FIH Champions Trophy is in England for the first time in its 18 tournament history.

The tournament took place from 10th - 18th July 2010 at Highfield Sports Club, Nottingham. It is the last official test before the BDO FIH World Cup in Argentina in August, and thoughts are also turning to the fast approaching London 2012 Olympic Games.

As official equipment suppliers to England Hockey, Harrod were the natural choice to supply the hockey goals and shelters for the Champions Trophy. Usually supplied red, the tournament hockey goals were sprayed blue in honour of the event sponsor Samsung.

A total of five Integral Weight Hockey Goals, two Premier Curved Team Shelters and a Hockey Officials Shelter were supplied for the event, which also incorporates the Men's Four Nations Series and Wembley Legends Match. Staff from Harrod will be on site for the duration of the tournament as Sales & Marketing Director Les Saunders explains: "such a high profile event deserves the best possible equipment, and we are delighted to be involved. By providing staff support on site we are able to assist with the smooth running of the tournament and ensure that these world class players are provided with world class equipment".

The tournament was brought to an enthralling end with the holders Argentina defeating the Netherlands 4 - 2 in the final to take the gold medal. England also had cause to celebrate on the final day coming back from 1 - 0 down to beat Germany 2 - 1 and take their place on the podium for the first time ever as Bronze medal winners.

Available from the Pitchcare Shop

Harrod Hockey Goals are now in Australia & New Zealand click below for more!