by Alice Northrop
in Bowls and Consultancy
on 26 Apr 2016 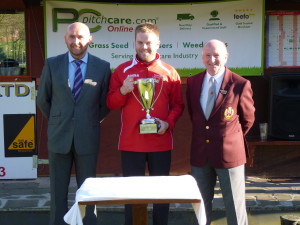 The sunny final ended the competition, which started back on 20th March, with matches played every Sunday.

Gary Potter, ALS Technical Sales Manager for the North East, attended the event and said, "the day was long but very enjoyable and the sun shone throughout the day."

There were eight members in each team, all trying to win with the biggest margin as it was a total aggregate points game throughout all 8 ties. The final was slightly one sided, although Kings Heath Park rallied towards the end, just falling short in the quest for the title.

The event was very well attended, and Gary was made to feel very welcome by Peter Higham, the President of the British Crown Green Bowling Association.

ALS have been working on the green recently, and Gary met with Head Greenkeeper Stewart Bradshaw and his father David, who is the Vice Chairman of the club. They decided to use the Air2G2 machine to relieve compaction, which was highlighted on certain parts of the main green, which was holding a considerable amount of water. As well as this, options for fertiliser, chemicals, wetting agents and seeds were discussed with the team.