by Football Foundation
in Football and Synthetics
on 29 May 2018

Schoolchildren and football fans in Greater Manchester will now benefit from a safe and enjoyable place to participate in grassroots football, following the opening of two new all-weather pitches for St Joseph the Worker RC Primary School and Moorfield Community Primary School. 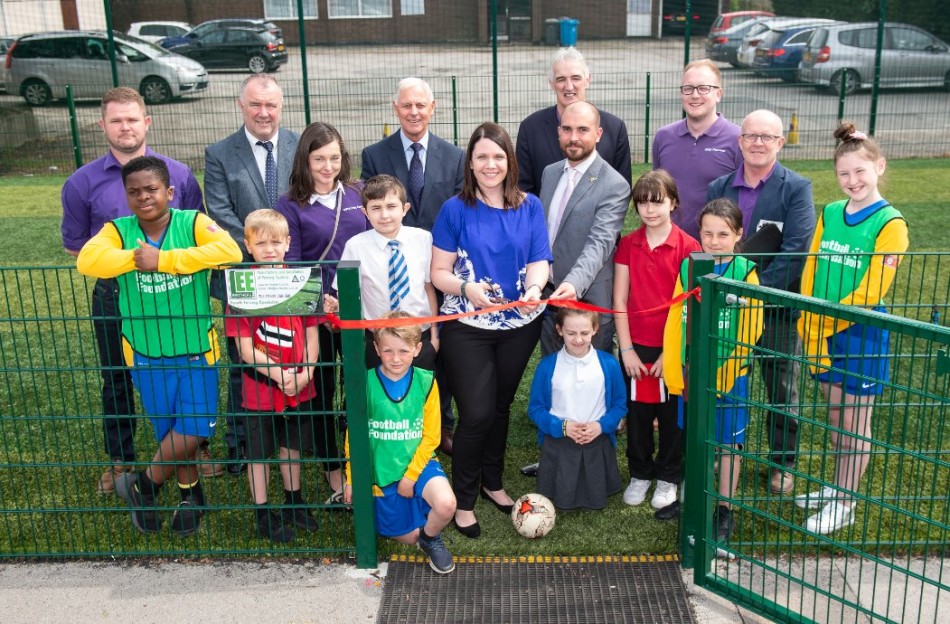 Dawn Ridyard and David Nightingale (centre left and right), Headteachers at the two schools that have received the donated facilities from SIS Pitches, officially opened the two all-weather surfaces yesterday, which was cause for much celebration from the pupils. They were joined by George Mullan, CEO of SIS Pitches (centre right), David McDermott, Chief Operating Officer at the Football Foundation (centre left), John Shiels, Chief Executive at Manchester United Foundation (second from left) as well as a number of SIS Pitches representatives.

The 3G multi-purpose synthetic pitches have been donated by global specialists SIS Pitches. SIS Pitches has recently installed six of the 12 pitches for this year's World Cup tournament in Russia; including at the Luzhniki Stadium in Moscow, the location of the World Cup final. This will be the first time a World Cup final is played on anything but an all-natural surface, with the pitch set to be the most technologically advanced in the tournament's history.

The organisation teamed up with the Football Foundation and Manchester United Foundation to develop the two SISTurf Superior playing surfaces for the schools in Irlam. They will be used by two primary schools as well as the local community, providing a fun and secure sporting environment in an otherwise underprivileged area.

Layton, a Year 3 pupil at Moorfield Community Primary School, said: "It's amazing - we love it and can't wait to play on it. We can really make sure we use all our skills because we aren't scared of falling on the concrete - and it's green!"

Manchester United Foundation has been involved in the project from its inception, originally identifying the primary schools as the site that would benefit the most from two new pitches.

Now, Manchester United Foundation will deliver a number of sessions using the state-of-the-art surfaces. This includes an afterschool girls' football programme for Key Stage 2 pupils, which is helping to improve the number of young girls getting involved in the game - a key objective for the schools. Laila, a Year 6 pupil at St Joseph the Worker Primary School, said: "As young women most of us don't get to practise football with the boys, because they can take over the playground easily. But thanks to this pitch we have another space to arrange a game so there is more room for everyone to play. It's for everyone, staff, pupils and families. We can all enjoy it together, playing, having fun and enjoying life!"

Additionally, Manchester United Foundation delivers Premier League Primary Stars sessions including Move With Manchester United, the objective of which is to improve children's agility, balance and coordination with the focus on pupils becoming confident and competent movers.

Not only will the new football facilities benefit pupils during school hours, but they will also provide a venue for other grassroots community teams. Irlam Vale FC, a local grassroots football club are already set to use the new pitches for training - having previously used the schools' grass pitches before the project. There is an aim for children at the primary schools to be signed to the team.

John, a former Moorfield Community Primary School pupil who now returns to the site to deliver sports sessions, is delighted to see the new facilities available and said: "A lot has changed at the school since I was there. A safe green space that we can always play on was never available and now that has changed. These children are very lucky. It's brilliant for the children who enjoy it every day."