This recent, very eventful week in the World Cup included this nation of 203 million holding its breath during the Brazil v Chile epic, a ten-man Costa Rica continuing their in-form run after beating Greece on penalties and, of course, the Suarez bite.

The latter dominated the sporting headlines here for a day or two, but was seen as funny more than anything else, and the four month ban has baffled many.

In Salvador, the fan fest screen is next to the beach and the general spirit is high. Near Salvador's stadium, Arena Fonte Nova, there is a large lake where people often dive into to cool off after matches.

Considering the heat, an incredible sight around the stadium and at the fan fest are Bonecos Gigantes de Olinda. Translated as Doll Giants from Olinda, after the city from where they originated, these huge characters depict past and present football players, managers, Abraham Lincoln in a Brazil shirt and many other random people.

The French team demolished the Swiss 5 - 2 in Salvador and I'm starting to think they could go far in this tournament. Since their home victory in 1998, they seem to have either nearly won the Cup or lost badly. Four years ago it was a disaster with internal problems destroying all chances, but this year the harmony looks to have returned.

Expectations have been low for France in the run up to this World Cup, and only time will tell whether this was justified or not.

The heat here in Brazil has been a serious challenge for all the teams but especially the European ones not accustomed to playing in these kind of temperatures. 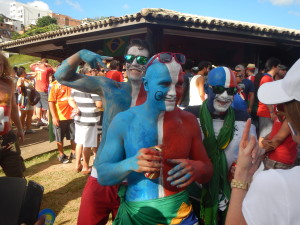 It is winter here now, but this is only felt to any real extent in the middle and down to the south of the country. In Rio for example summer temperatures are typically around the 30-35 degrees centigrade mark. As it is now, temperatures of around 20 degrees are the norm - pretty conducive for a game of football.

In places like Fortaleza and Recife in the north, temperatures are now around 35 - 40 degrees during the day - sweltering even to walk around in, so must be a real challenge to play in, especially the 1pm kick offs.

The Holland v Mexico game at Fortaleza was the first time the drinks break has been called by a referee as temperatures reached 39 degrees. I'm sure plenty more of these breaks will be needed in Qatar!