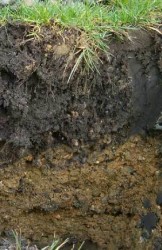 Wednesday (5th December) marked World Soil Day, a celebration of one of the Earth's most valuable assets. However, the day is also an opportunity to highlight soil's importance and the threat it is under from unsustainable use.

An estimated 1.9 billion hectares of soil is degraded worldwide

As soil takes thousands of years to form, it is regarded as a non-renewable resource; however, soils are under threat around the world. Across the world, soil erosion, sealing and degradation are having massive impacts. In the UK alone, the last major study of soil, conducted in 2009, showed 2 million tonnes of topsoil in Britain is being eroded every year.

One major problem in Europe is soil sealing - the covering of land with an impermeable material. EU figures show that over 1,000 km² of land per year, or an area the size of Cyprus every ten years, is lost to soil sealing in the bloc. The International Assessment of Agricultural Knowledge, Science and Technology for Development (IAASTD), a groundbreaking report into agriculture, conducted by over 400 scientists from across the world concluded that 1.9 billion hectares of soil is degraded worldwide.

Soil's most widely recognised function is supporting plant growth, whether agricultural crops, trees or native habitats but it is increasingly being recognised for other environmental benefits such as climate regulation (greenhouse gas emissions and carbon storage), water flow regulation (flood control) and as the largest terrestrial reservoir of biodiversity.

Due to its reliance on natural resources, of which soil is but one, food production is an incredibly fragile human activity. The need to protect soils and allow them to replenish is only now being understood.

Researchers at Scotland's James Hutton Institute said most of the untapped potential in crops lies in the roots below the surface and that further examination of these will lead to better understanding and sustainable improvements in growing. The Hutton Institute maintains "Roots have been studied less than shoots and leaves simply because they are out of sight, out of mind and more difficult to monitor." The institute's researchers are examining how roots and soil interact to improve plant nutrient uptake and help improve yield.

Richard Doyle, of Soil Science Australia, commented, "The pressure on land, the pressure on fertilisers supply, the population growth globally, we've got a lot of people to feed and most people don't realise they are dependent on the soil system to do that."

In the UK, organic certification body the Soil Association is partnering with the 'Save Our Soils' campaign as part of celebrations for World Soil Day. In line with calls from soil scientists including Dr Doyle, the Save Our Soils campaign aims to raise consumer awareness about the importance of soil for health, food, security and climate.

Tom MacMillan, Innovation Director at the Soil Association said, "Partnership with the Save Our Soils campaign is exciting as we are working towards the same goal - raising awareness of the importance of our soil and its relationship with food production, which is vital for our future."

The need to protect the Earth's soils is essential; earlier this year a United Nations Environment Programme (UNEP) report stated that global warming will get worse as agricultural methods accelerate the rate of soil erosion, which depletes the amount of carbon the soil is able to store. The report highlights assessments indicating that certain types of intensive agriculture are triggering soil erosion rates some 100 times greater than the rates at which nature can form soil in the first place.