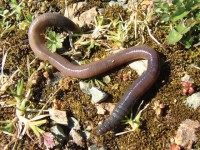 Earthworms, and above all their casts, are a long suffered problem of greenkeepers and groundsmen alike. In particular, these casts are very undesirable in fine turf situations such as bowling greens, golf greens or cricket tables where accurate ball roll or bounce is particularly important.

With the ongoing depletion of worm control chemicals, coupled with the ever milder and wetter weather conditions experienced in recent years, these 'pests' appear to be on the rise. I think it is time, therefore, to remind ourselves of the problems they cause and ensure we are doing all we can to limit their progress.


Australia has 650 known species of native earthworm. Introduced species are commonly found in agricultural environments along with persistent natives. Most of the 75 or so exotics have been accidentally introduced into Australia. The total species numbers are predicted to exceed 2,000. Each species exhibit unique behavioural and physiological characteristics, their distribution being influenced by soil pH, soil texture, organic matter, mode of feeding, life style and their location within the soil profile.

For example, sandy links golf courses are often not as prone to infestation as heavy soil parkland courses, as the worms prefer moisture retentive soils where there is a higher proportion of organic matter. The sand is also abrasive to their skin, something they do not like.

Maybe surprisingly, only a small number of species actually produce the casts which are such a nuisance. The most abundant of the casting species is Lumbricus terrestris, which is also the UK's largest species at 90-170mm in length. This earthworm is nocturnal and forms a permanent vertical burrow opening onto the soil from which it forages for food.

Although all earthworms are hermaphrodites (i.e. they have both male and female reproductive organs), not all can reproduce asexually and most, including L. terrestris, must find a mate with which to exchange sperm cells. Mating usually takes place on the surface at night when temperatures are lower, humidity levels are higher and birds are not about. Frequent mating takes place throughout the year, but inactive periods are brought about by unsuitable environmental conditions - for example the soil is too dry during the summer or too cold during the winter.

It has long been understood that there are many benefits to be gained from having earthworms in the soil. In fact, Charles Darwin studied them closely and recognised their role saying, "It may be doubted whether there are many other animals which have played so important a part in the history of the world, as have these lowly organised creatures." Their most important role is in the decomposition process within the soil which increases nutrient availability and soil fertility, but other benefits include increased infiltration rates, the modification (improvement) of soil structure and soil aeration, thereby leading to improved rooting of plants.

Unfortunately, for those of us whose primary concern is the playing quality of our sports turf , the disadvantages brought about by the indigestible material ejected by the earthworm in the form of a cast are significant.

In the first instance, these casts are unsightly, but the main concern is the effect of the casts on the run of a ball across the surface. The relationship between the ball and playing surface is important in all ball games, but is particularly so in fine turf situations such as on a bowling green, golf green or cricket table, where ball roll or bounce is imperative. Anything that interferes with this relationship is therefore a big disadvantage.

Unhappily, that is not the end of the story, as there are further disadvantages to be aware of. These include the creation of muddy conditions brought about by casts being smeared on the playing surface. This can cause smothering of fine grasses as well as sealing of the surface to ultimately reduce surface drainage. In particular, worm casting can have a very significant impact on newly installed slit drains that can soon become capped over and ineffective if worm casting is not controlled.

Additionally, the production of casts can bring dormant weed seeds to the surface, and the casts themselves provide a perfect seedbed for germination and establishment, especially as they are rich in nutrients and have higher levels of nitrogen, phosphorus and potassium than the surrounding soil. Furthermore, earthworms may encourage other pests, as they are a rich food source for creatures such as moles.

The presence of casting worms should be minimised by cultural control methods, thus reducing the need for chemical control. In recent years such measures have become more and more important as the range of available chemicals has slowly been eroded. Greenkeepers and groundsmen alike can no longer rely on a single application of a wormkiller or lumbricide to eliminate the problem for protracted periods.

In the first instance, we should be looking to control the level of sub-surface thatch that provides a rich source of food to worms. Thatch is also, of course, an undesirable feature on most sports turf surfaces for other reasons. Similarly, clippings should be boxed off where possible, as these too provide a constant source of nutrient and could also increase thatch levels in the upper profile.

Understandably, this may not always be practical on all areas such as a golf course, but it should, at least, always be done on greens and tees. Excessively organic topdressing materials should also be avoided, and the use of organic based fertilisers limited for the same reasons.

Worms do not like acid conditions and much prefer neutral or alkaline soils. This is most useful from a fine turf point of view as acidic soil conditions also favour the desirable bent and fescue species. Therefore, always try and use acidic-reacting materials as opposed to alkaline ones. For example, lime in any form is a definite no no - worms just love it! Lime can come in various disguises and care should be taken when selecting sands, especially for topdressing. Always ensure that the material used contains no more than 0.5% lime - a fact that you should make your supplier aware of. Similarly, using limestone to backfill drain trenches is not a good idea, even if it is often cheaper than other materials.

With very high lime content, limestone can often be readily broken down, especially in acid soils. Not only will the use of limestone in this manner attract earthworms, but the presence of casting worms will also lead to a deterioration in the effectiveness of the drain, as they will cast into the stone backfill, contaminating it with soil.

Similarly, irrigation water should be tested for pH, alkalinity and salinity on a routine basis to ensure that it will not influence the alkalinity of the soil.

Modifying soil pH to create more acid conditions has become one of the more effective lines of control. Sulphur and sulphur-based products oxidise in moist soil to form sulphuric acid, which lowers the pH. Additional benefits of sulphur can include flocculation of the fine clay particles into larger ones, increasing pore spaces and improving soil structure and drainage.

To help acidify turf the regular use of ammonium sulphate based fertilisers is recommended, especially as research has shown acidifying fertilisers have the added benefit of favouring the development of the finer grasses. Similarly, applications of iron sulphate will have a comparable acidifying effect and, in this instance, will also help control moss and harden the sward against disease.

Of course, this process should not be taken too far - if acidity levels were allowed to drop as low as pH 4.0, for example, then there would be very little earthworm activity, but the fine turfgrasses would also be thin, weak and prone to moss invasion. For many fine turf situations the desired level should be a pH of about 5.0-5.5, although this will vary in the case of golf depending on the type of course.

A pH of this level should have a significant impact on earthworm populations and is also perfect for the development of browntop bent grasses. With regard to cricket tables and tennis courts, where ryegrass can be a significant sward component, care should be taken when amending the pH as ryegrass does best in soil conditions around neutral pH.

On golf courses, a further technique that has been used successfully to reduce worm populations is to apply sand topdressing to an area, as the sand irritates the worm's skin. However, this again would not be possible on a cricket square (but perhaps the outfield), nor on tennis courts.

Carbendazim is a systemic benzimidazole fungicide that has wormkilling side effects which acts by disrupting the worm's feeding. Products are best sprayed when worms are near the surface, usually in spring or autumn, but control is invariably short-lived and treatment may need to be repeated one to two times each year. Applications should be avoided in drought or when the ground is frozen. To help maximise effectiveness the surface should be aerated prior to application. Always follow the manufacturer's instructions.

It may be that we see developments in more effective chemical control in the future but, with a small and specialised market, do not hold your breath - it is more likely a discovery will be made by accident!