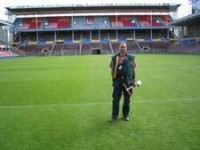 Built in 1937, and re built for the world football championships in 1958 when Sweden met Brazil and Pele made his debut. Rasunda, Sweden's national stadium has seen many changes, the most recent of which took place in 2000, when the pitch was re-constructed. Robert Limpar who has been at Rasunda since 1992, and head groundsman since 2002 remembers that the old pitch suffered from black layer, a situation that wasn't helped by the fact that the pitch heating pipes were only 10 cms below the surface.

"We couldn't aerate properly, and we certainly couldn't use effective aeration machinery without running the risk of perforating the pipes," he recalls. "When we re-built the pitch, we got rid of the black layer and laid a new heating system 30cms below the surface which meant you could work above it."

Stefan Carebo, stadium manager since 2000 has, along with Robert Limpar, inherited certain problems, which come with the building and the geographical and climatical situation. "Our west stand is approx. 20 to 25 metres high and causes shade problems," he says. "It's not possible to construct a roof which allows the sunlight to shine through. Our season lasts from the beginning of April to the middle of November, and all our teams play here. This year is the European Championship and Rasunda will host almost 50 games."

Situated on the same latitude as the Orkney Islands, Stockholm, suffers from a low sun angle during spring and autumn, (approx 30% down on England's), and correspondingly low temperatures. 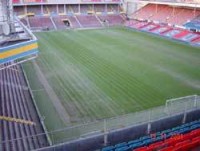 The interface between the new turf and the underlying soil had created a layer, which, without treatment could have lead to the formation of an anaerobic black layer in the future. Our first priority was to get the soil to breath and release carbon dioxide."

An extensive aeration programme has been implemented including cross tining, hollow coring and solid tining, top dressing with a mixture of sand correlating to USGA spec. This is incorporated with 5% perm-o-pore, a porous ceramic material designed to improve the physical characteristics of sand based root zones. "Analysis showed a huge soil imbalance," continues Stromberg, "with an excess of phosphorous which was blocking the up-take of other nutrients. Our programme includes two soil amendments, Pervade, a penetrant, (which also brings oxygen into the top two inches of the soil) and CalpHlex, a chelated liquid calcium compound, to increase nutrient availability, and flush away undesirable elements.

Lack of light inhibits photosynthesis and so Protysen, which delivers complete amino acids, (thus helping the plant to complete the process of producing mature protein) is an important part of Rasunda's foliar feed regime. Turgor, a blend of silicone and potassium, to increase cold tolerance and disease resistance and generally strengthen the plant is also applied through the leaf, along with balanced nutrients."

"As grass plants can only take 20% to 30% of their food requirements through the leaf, foliar feeding has to be administered in small regular quantities, and we're putting a basic NPK granular and liquid fertiliser into the soil," Stromberg concludes. 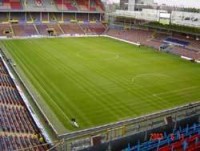 The battle is by no means won. A member of the Floratine team visits Rasunda once a month on average to monitor progress, and Richard and Peter Stromberg are in constant touch over the phone. But analysis of the latest soil samples showing a decline in sodium, chlorides and bicarbonates indicates that Rasuda's root zone is becoming more efficient. The arrival of worms is a good sign.