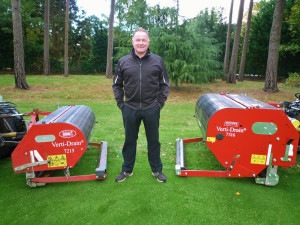 Laid out in 1908, Worplesdon Golf Club's course can be described as classic Surrey heathland providing a real test for the golfer.

The club is no novice when it comes to aeration as they have been using a Verti-Drain 7215 from Charterhouse Turf Machinery on their tees and greens for the past seven, very productive, years.

So much so that in early 2013 they added a larger Verti-Drain 7516 to aerate their fairways, practice ground and walk-off areas.

Course Manager Paul Robinson, a single figure handicap golfer himself, said "When we considered adding to our fleet we realised the only expense incurred in seven years on the 7215 had been for tine replacement and this convinced us the Redexim Verti-Drain 7516 was the right choice.

We had previously contracted out the work on our 11 hectares of fairways and semi-rough areas, but acquiring our own larger Verti-Drain has given us more control over our course maintenance regime."

Charterhouse Turf Machinery General Manager, Nick Darking, was particularly pleased to be able to supply another Verti-Drain as, "Paul is renowned for wanting the very best from his aeration equipment" he said.

"Although a heathland golf course," Paul went on, "Worplesdon is said to resemble a links course, no truer than this year with such a wonderful summer. Our remit has been to water the turf to keep it alive, not necessarily to keep it green and has been helped by having our own reservoir to let us water them when required.

However this sometimes does becomes a very fine balance. The fairways have certainly benefited this year from this new Verti-Drain 7516. When we took delivery we used it almost immediately for a double-pass on our fairways and semi-rough areas and have seen the benefits of that work throughout the summer.

It has enabled us to aerate all areas and so increase the rooting capabilities of the grass plant, making it able to cope with very dry conditions and encouraging the finer grasses.

This has enabled us to deliver firm, fast running fairways that our members prefer to play on. The variable depth of tine penetration of up to 16" offered by the Verti-Drain 7516 is extremely valuable and gives us more control where moisture content is concerned."

Designed with harder areas in mind, the 5ft wide Charterhouse Verti-Drain 7516 is one of their 'heavy series' and the smallest capable of penetration and heave Working width is 1.63mm (63") and the unit weighs 1128kg, making it ideal for a 45hp tractor with a lift capacity of 1350kg. Tractor size can be reduced if the retrofit bogy wheel system, for transporting on highways, is utilised.