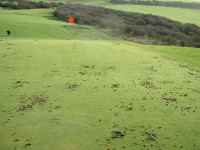 A gaping hole in the UK (United Kingdom) turf insecticide market was finally filled in February 2006 with approval by Pesticide Safety Directorate (PSD) for Merit Turf from Bayer Environmental Science. Prior to approval of Merit® Turf (active ingredient imidacloprid) there was nothing greenkeepers or groundsmen could do for the equally 'big holes' in turf caused by chafer grubs and predatory birds and badgers.

Courses, greens, pitches and lawns up and down the country were experiencing increasing levels of damage from chafer grubs and secondary damage by rooks, crows, badgers and foxes foraging for the chafer beetle larvae. And none more so than golf courses along the south coast of England with light sand-constructed and well-drained greens on the South Downs.

Chris Briggs, Business Development Manager of Avoncrop Amenity Products, sees a definite worsening of chafer grub attack especially on golf courses along the Sussex coast. "Milder winters seem to bring active grubs to the surface much earlier in the year when traditionally they would still be hibernating deeper in the soil profile", says Chris. His recent observations suggest 2007-2008 could be a bad year for chafer grubs. Chris reports huge aerial populations of adult chafer beetles at Stonehenge on the Wiltshire downs in early June, indicating grub damage to turf could be high and sustained over the following year.
Secondary bird damage high

Benfield Valley Golf Club is a private 9-hole course north of Hove with greens on the downs and fairways sweeping down towards the sea. In March 2007 large populations of chafer grubs became apparent when rooks and crows started to tear up greens to get at the larvae. Course Manager Simon Martin had not seen chafer grub damage on the course until early March this year. He was completely taken aback when pristine turf on three down land greens started to 'disappear before his very eyes', as ravenous rooks tore into the surface to find fat white larvae beneath.

Assistant Course Manager Sarah Martin described the damage as massive. All of the 5th and 6th greens, almost half of the 4th and significant sections of fairway were being ripped up by rooks and crows. "Parts of the course resembled a ploughed field", said Sarah. Interim costs and hassle were horrendous she said. Greenkeepers worked until 10 pm every night securing the greens with red and white 'workman's' tape and a variety of bird scaring devices to keep birds off until a lasting solution could be found. 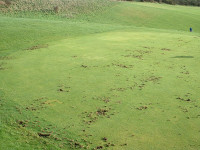 Merit® Turf from Bayer Environmental Science and applied by a SS-2 drop spreader was the saviour, recommended by Chris Briggs after confirmation of chafer grubs. Sarah Martin describes Merit® Turf as a 'miracle cure' because just one day after application thousands of chafer grubs and some leatherjackets were found on affected parts of the green and bird damage ceased immediately.

"The rooks and crows certainly know where to look", says Sarah "because although the whole of the 4th green was treated with Merit® Turf, grubs were only found on that portion damaged by birds. Affected greens on the downs suffer significant sustained wind", says Sarah, "but Merit® Turf was easy to apply and clearly worked."

Benfield Valley will now apply Merit® Turf every year before eggs are laid in turf by winged adult chafer beetles in May and June. Imidacloprid has sufficient residual activity to allow application before egg lay begins. "Cost in materials, repair and manpower and hassle from this brief episode with chafer grubs was horrific", said Sarah, "and we certainly don't want a repeat performance.

Merit® Turf will be applied every year as a preventative insurance treatment to all greens including those lower down and previously unaffected by chafer grubs and secondary bird damage. Leatherjackets are now taken care of at the same time by Merit® Turf says Course Manager Simon Martin.

Chris Humphrey is 'Golf Course Manager' for Brighton and Hove City Council and responsible for two 18-hole municipal golf courses at Waterhall and Hollingbury Park. "We had no problems with chafer grubs for around 15 years until January this year when rooks started to tear up greens on the Waterhall course", says Chris. Waterhall golf course is near the 'Devil's Dyke' on the South Downs just north of Brighton. Greens over-lay rich seams of chalk but are constructed from light, sandy acid topsoil ideal for chafer grub activity.

All greens at Waterhall were traditionally sprayed with chlorpyriphos each year in November to control leatherjackets and Chris first thought this was leatherjacket damage and the treatment had failed. Six of the down land greens were damaged by chafer grubs and then rooks, the worst affected losing two thirds of playing surface. Such were damage levels that the club was forced to reschedule one tournament match 'away' with members losing the all important 'home advantage'.

Chafer grubs were confirmed underneath the damaged turf and Bayer's Merit® Turf applied with a SS-2 drop spreader, carefully calibrated to apply the granular product over a 0.9 metre band width at the recommended rate of 3g/m2.

"Benefits from using Merit® Turf were apparent in days", says Chris, "bird damage ceased and we repaired the damage." Chafer grubs were quickly controlled by imidacloprid absorbed through the insect cuticle or by grubs ingesting this systemically acting insecticide when they consumed the grass roots. And Merit® Turf also took care of any residual leatherjacket population.

Greens on the down land part of Waterhall golf course typically experience strong winds. Chris prefers to use the solid granular formulation of Merit® Turf which is safer and more accurate than liquid sprays in windy conditions. "Though finely formulated the granules are dense and heavy", says Chris, and being released close (5-7 cm) to the ground do not pose problems even in wind. Each green is typically completed in about 10 minutes.

Merit® Turf is now applied as a matter of course to all greens at Waterhall and Hollingbury Park golf courses, well before adult beetles lay eggs in mid May to mid June. They clearly do not want to see and experience that kind of damage again and are now controlling both chafer grubs and leatherjackets with Merit® Turf.

"Implications of chafer grub attack and associated animal damage are serious", says Chris Humphrey, "with cost of repair, lost green fees, disrupted tournaments with loss of good name and reputation, as well as grief for members and green fee players."