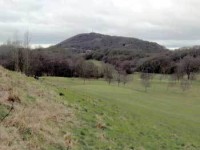 This year, being the club's centenary, will no doubt be a busy one for me and my staff. The expectations from the committee and members will be high. With that in mind I decided to scale down the amount of winter works we would be doing this year.

During the last four years we have seen quite a lot of work being completed out on the course. New piped drainage systems in place on the 1st, 10th, 11th and 13th fairways, the reconstruction of the 1st green, and a complete reconstruction of the 7th tee (the Pulpit), the club's notorious par three hole (a very steep drop through a narrow gap). Extensive earthworks were carried out to stabilise and enlarge the tee.

However, to mark this Centenary year I thought it would be a good idea to construct a new feature for the course. There was a boggy area on the 2nd hole that I needed to improve, so I put together a draft proposal to the committee last autumn with a suggestion to build a pond which would enhance the area and provide a testing challenge to the golfers as they approach the green.

The committee was very much in favour, especially as we proposed to build it ourselves. We hired in a 360 degree digger to excavate the pond and used our local clay reserves to seal it. We did have one or two leaks but these have now stopped due to settlement. We have turfed the banks and planted some trees and shrubs to enhance the area and provide some cover around the pond. I expect it to be finished by the end of March. It has been an interesting project and will provide an added attraction for club members, and the local wild life.

The course can best be described as a downland parkland course. Our par 67, 18 hole, 5657 yard course is very testing, particularly as it is built on the side of The Wrekin, a famous Shropshire landmark. The course is demanding for both me, my staff, the members and golfers who play the course. The combination of the topography of the site and the comparatively small plateau greens is a stiff test of stamina and skill.

We are surrounded by woodlands, with the Limekiln and Ercall woods providing a wonderful habitat for much wild life which, on occasions, cause disruptions and work for me on the course. 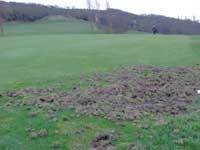 green where they have been feeding on chafer grubs in the turf. We have consulted our local Shropshire Badger Society, who recommended that we set some food trails out for them to entice them away from the greens and tee areas.

This involved placing some dog food underneath a piece of wood, thus protecting it from being eaten by other animals, but allowing the badgers with their strong heads to lift up the wood to access the food. A trail of peanuts is used to lead the badgers to the dog food and gradually, over time, you can move the bait, and the badger, away from your fine turf areas.

The damage these badgers make is unbelievable. They can dig out turf to a depth of 100-150mm leaving the surface completely obliterated. We usually have to re-turf the greens using turf from our nursery.

We also have problems with deer running across greens and bunkers, rabbits burrowing into sides of tees, squirrels ring barking trees and moles popping up here, there and everywhere.

The design and layout of the course has changed very little over the years. Many of the greens and tees are as they were 100 years ago. Every hole is up and down dale with many steep and undulating fairways. The most noticeable change is our clubhouse, the old one was situated in the middle of what is now the M54 motorway.

I have four staff. I have been here 17 years taking over the headship from my dad Ben in 1993. Karl Lans, deputy, 12 years, Andrew Dalton, 9 months but has worked here before, Alan Parker, 12 years and Gary Turner YTS lad currently studying at Walford College.

Our grass cutting does not really get underway until May, this is due to the fact that the course is set high up on the side of the Wrekin coupled with the fact that our soil is predominantly a clay soil which takes time to warm up. Air and soil temperatures do not really get consistently above 10 degrees until mid to late May. The greens are cut on a daily cycle with the height of cut gradually being brought down to 4-3.5mm, our summer height.

As with most golf courses we have summer and winter heights of cut:-

All our greens, except for the first, are soil pushed up plataeu greens, averaging between 350-400m2. Being small and often sloped they provide a severe test for many of our members. Even the likes of Ian Woosnam and Sandy Lyle, who played here in their early careers, could not get the better of this course. The exception was Peter Baker, who held the course record for many years with a round of 65. This was only beaten last year by Andy Stevenson, a current club member who shot a 64. 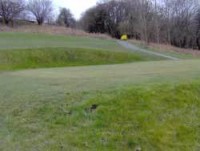 With the greens being well over 80 years old, many were constructed using the clay bowl technique. This was a common practice in the old days when there were no irrigation systems available. The greens were built in a concave shape and constructed with clay sub base materials to help keep water within the soil profile.

However, with greens now being expected to be played on all year round, we have gradually continued to improve the drainage capacity by installing systems and undertaking aeration work. We have drained the greens using the whizz wheel and back filled the slots with lytag. Additional aeration and sand dressings were then applied to improve surface drainage. 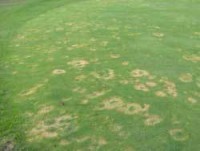 We cut our greens using a Jacobsen G plex 3 triple mower and use both groomers and verticutting units throughout the growing season. We gradually reduce from our winter cutting height of 8mm) in 1mm reductions until we get to our summer green height of 3.5mm, cutting on a daily basis May-October. We groom and verti-cut the greens regularly and scarify every 6 weeks with our Huxleys scarifyier.

We aerate the greens with a range of machines, usually beginning in March when we hollow tine and apply a topdressing 70/30 rootzone material. We follow this up with a monthly programme of solid tine spiking, using 7mm diameter micro pencil tines fitted to our Groundsman aerator and topdressing little and often.

In September we contract hire a vertidrain to achieve deeper penetration down to 225mm. 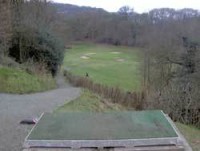 Because we are restricted with space our tees are fairly small in size. We have managed to increase the size on the par three holes, particularly the 7th (The Pulpit), where a couple of years ago we had some major reconstruction to stabilize the tee and, at the same time, increased its width. We carry out regular aeration and continue to overseed at every opportunity to keep a good cover of grass.

Our aeration programme for the tees is identical to our greens, hollow coring in March followed by monthly micro tining and, in September, running over them with the vertidrain machine.

The rough is very undulating and sloping. We have recently invested in a brand new four wheel drive Renault 67hp tractor that can cope with the hilly conditions. It will certainly pay for itself and provide better driver comfort for our operators. 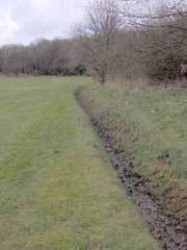 , 10th, 11th and 13th fairways. All the work was contracted out and was installed by Pearl drainage company.

We have a number of open drainage ditches running along the perimeter of the course. These ditches are important in that they prevent water from entering onto the course from the large woods surrounding the area.

The fairways are maintained with our new Jacobsen LF 3800 fairway mower which has proved to be very reliable, producing an excellent cut. We mow the fairways twice a week and sometimes may have to mow some parts of the course three times. The rough is mowed using a Lastec articulator rough mower towed by the Renault tractor.

I hire in Amenity Land Services (ALS), a local company, to carry out the fertilizing and weed control on our fairways. They are more geared up for this work and it enables me to spend more time on other areas of the course. 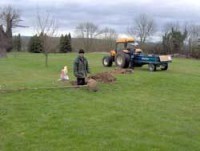 Each year we try to plant a number of trees around the course to enhance and provide new areas of interest for our members and wildlife. We have been gapping up a few areas along the fairways with a mixture of native trees in keeping with our natural habitat.

I always like to try new products and materials. I will certainly lbe ooking forward to the new product from Bayer Environmental Science for chafer grub control which is due out in April 2005. Chafer grubs have caused me no end of damage. Nearly all our green surrounds and tee areas have been devastated by badgers snouting for the chafer grubs. It took us over five hours to repair the damage on one tee alone and we may still have to returf.

This year will certainly be busy for me and my staff. A festival of golf has been organised, 10 days of events and charity matches starting on June 21st, finishing with a number of prestigious matches featuring past captains and club officials. We will also be hosting the Scotts Management Cup, which is a chance for club secretaries, greens chairmen and captains to compete and socialise.

Well, I could do with the weather warming up now so we can get some grass cutting done. I hope all you fellow greenkeepers have a good year and may all your seedlings grow in the way nature intended, or the way we want them to grow anyway.