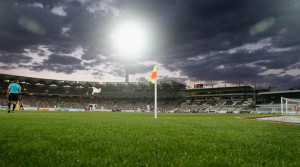 Ground staff at the Simonds Stadium in Geelong, Australia scrambled to find their paint cans shortly before kick-off in the A-League on Monday, when it became apparent the penalty area was considerably smaller than regulation size ahead of Melbourne Victory's match against Newcastle Jets.

Victory, who play the majority of their games at Etihad Stadium and AAMI Park, were due to host the visitors from New South Wales at Simonds Stadium.

The oval venue, home of AFL powerhouse Geelong, has staged the beautiful game before, including a famous friendly win for Victory over Diego Simeone's Atletico Madrid in July 2016.

But it seems the rare appearance of a round-ball fixture in the traditional Aussie rules hotbed caused some confusion among the workers charged with preparing the playing surface, although it was nothing a hasty readjustment could not solve.

You can read the original article from Four Four Two HERE