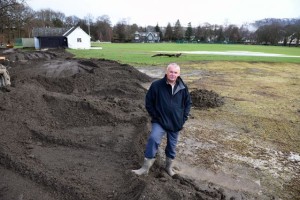 A leading conservation organisation has warned that Cumbria's cricket clubs could face future disruption on a scale similar to that caused by Storm Desmond.

Keswick Cricket Club was one of many in Cumbria to be hit by flooding in 2015, when the River Greta burst its banks. Appleby Eden, in Appleby, has yet to return to its base because of the extent of the damage it suffered.

The England and Wales Cricket Board distributed more than £1m in emergency funding to flood-affected clubs last year. A further £1.6m is earmarked for this year.

"We were affected badly by Storm Desmond and there's no doubt in my mind that Storm Desmond was a result of climate change," Keswick Cricket Club chairman Keith Richardson said.

"Anyone with half an eye open will see that climate change isn't just a problem in the UK but around the world. There's always something happening somewhere. Extreme weather is definitely on the increase."

Mr Richardson said that, in his opinion, the Government should be doing more to protect towns like Keswick - and its sports clubs - from further flooding.

Mr Richardson said that at this moment, it is difficult to predict what impact further flooding would have on Keswick Cricket Club. "It's a hypothetical situation," he added. "We've fought back before and there are people that have fought back on three occasions. But climate change is happening and there's not enough being done about it."

Colin Butfield, director of campaigns at WWF-UK, said: "The quintessentially British sound of leather on willow in the summer months is being disrupted by increased rainfall and flooding that is scientifically linked to climate change. It is affecting cricket grounds and many other of the UK's favourite places, landmarks and landscapes."

You can read the original article from the Times & Star HERE