Barrie Stokes is currently chairman of Wythall Bowling Club and has been involved with the club since it's beginning in 1985. Barrie also oversees all the grounds maintenance issues at the club which is situated in Wythall Park, a local community park 7 miles south of Birmingham.

Barrie recently joined Pitchcare after being told about the site by John P Cassidy, who has a greens maintenance business in south Birmingham. Barrie emailed Pitchcare to ask for advice about treating an outbreak of green slime on his green. He was very impressed with the quick responses and the useful information he received from fellow members. As a result of the advice he has managed to remove the squidge (slime) from the green using 200g/100m2 of liquid Ferrous Sulphate which killed the algae. 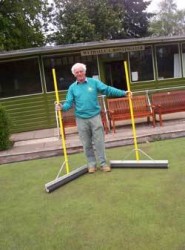 Barry has also used the site to purchase two roller squeegees which will help remove any surface water from the green when preparing for matches.

In 1985 Wythall Park Community Association managed to secure help from the Manpower Services Commission who, at the time, were promoting the use of free labour for community projects. Materials for the construction of the green were paid for with funding from Wythall Park Community Association. The green is 34 yards x 24 yards with lateral primary drains and perimeter ditches. The green was completed in 1985 and was ready for play in 1986.

The club has gone from strength to strength and now boasts well over 100 members and 30 associate members. The club operates a successful volunteer rota, involving working parties to carry out necessary repairs and maintenance to both the pavilion and green. Barrie has enlisted the help of ten volunteers who share mowing and maintenance duties/tasks during the playing season.

The club regularly fields ten teams who train and play matches on the green, often resulting in as many as 17 matches/practices being accommodated in any one week during the playing season.

The club has a Toro automated pop-up watering system enabling the green to be watered quickly and efficiently and, more importantly, uniformly. This has ensured good, consistent surfaces during the season.

The club employs J F Rothery Associates, a professional contractor, to carry out the end of season renovation works. They have maintained the green for a number of years and supply the 80/20 soil sand dressing materials. The club also take soil samples to monitor the conditions of the green, enabling the club to ensure they are doing the right levels of feeding and maintenance works to maintain a healthy sward.

The club will spend about £1000 each year on materials for the green. Barrie spends a lot of time at the green, often walking around it looking for any signs of disease and weeds. Barrie has noticed that after killing off the algae it has left small dark areas of dead material and he needs to encourage new grass into these areas. He has a technique which he has found to be very successful in establishing grass to grow on the green during the playing season. Using a knife to make long deep slits into the sward, he then puts seed into the slit ensuring that it closes to make good soil/seed contact. It's a slow process, but works extremely well. Barrie also makes a point of talking to other clubs' groundsmen to compare working practices and share knowledge - an important aspect of groundmanship.

The club has recently received some grant money from Awards For All, a government community-funding programme. The award has enabled the club to provide disabled access to the facility, including the provision of wheelchair and ramps.

The club continues to improve it's standing within the community, encouraging new members to join the club by arranging a number of social events and competitions. This has resulted in some new, young talent who are now becoming decent bowlers, and thus ensuring a bright future for the club.