by Dr Kate Entwistle
in Consultancy
on 23 Jan 2006 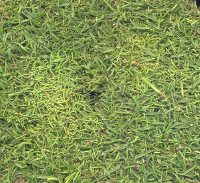 This disease is caused by the fungus Sclerophthora macrospora and unlike many of the fungi that caused disease in cool-season turfgrasses, this fungus is an obligate parasite. What this means is that the fungus must not kill the infected turfgrass plant because it needs to live on living plant tissue. In this respect, the fungus is similar to the rust fungi that can also cause turfgrass disease - but that is where the similarities end.

S. macrospora is capable of infecting and causing disease in most turfgrasses but it has become a relatively common problem on both bentgrasses and annual meadowgrass in close-mown swards. The mycelium of the fungus grows through the infected plants and will produce both resting spores within the infected tissues and, once the conditions are right, it releases motile spores which actively move in water films across the sward. 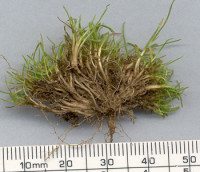 Once present within the plant, the fungus can remain for many years, possibly the entire life of the plant, but symptoms of the infection will only become apparent under cool, wet conditions.
Initially, the infected sward will appear patchy as plants start to discolour and become pale and yellowed.

Close analysis of infected leaves often shows a mild red colouration of the cells containing the resting spores but this is often only apparent under high magnification. As the disease progresses, individual plants are stimulated to produce excess tillers and this results in a tufted appearance to the sward. Close examination of the yellowing patches will also reveal a reduction in root development that will enable the tufted plants to be removed easily from the sward.

Since the causal fungus needs free water in order to complete its life cycle, the symptoms of this disease are often seen in low lying areas or in parts of the turf that are prone to holding water.
Infected plants can often be removed through verticutting or other grooming practices but management of the symptoms can be achieved through reducing the turf wetness and improving surface drainage.

There is limited information regarding fungicide efficacy in managing this disease but general opinion would suggest that cultural management with regard to improving water movement away from the sward is the most effective means of reducing yellow tuft symptoms.