by External source
in Rugby, Industry News, and Football
on 21 Jan 2017 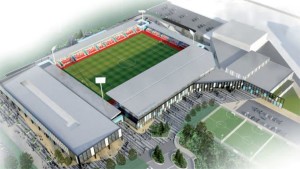 After a change of ownership last year, York City Knights have been given a double boost with the news that they'll be back playing at Bootham Crescent ground this season and that the new community stadium project is looking more likely following a judicial review.

Contracts between the club's new owners and City of York Council have finally been signed allow the team to play at York City FC's home for the 2017 and 2018 seasons as part of the local authority's Community Stadium scheme.

Concerns over where they would stage fixtures had been hanging over the Knights since the crisis-hit end of last season, even after last month's takeover effectively secured their future. But new chairman Jon Flatman announced the deal at a fans' forum at Huntington Sports Club last week.

The new, 8,000 capacity York Community Stadium in Huntington is back on plan after a challenge to the council-backed development had been rejected. Plans to add a 13th screen to the cinema complex adjoining the stadium had competitors objecting. The development can now progress.