by Val Graham
in Aeration, Machinery & Mechanics, and Equestrian
on 30 Dec 2021 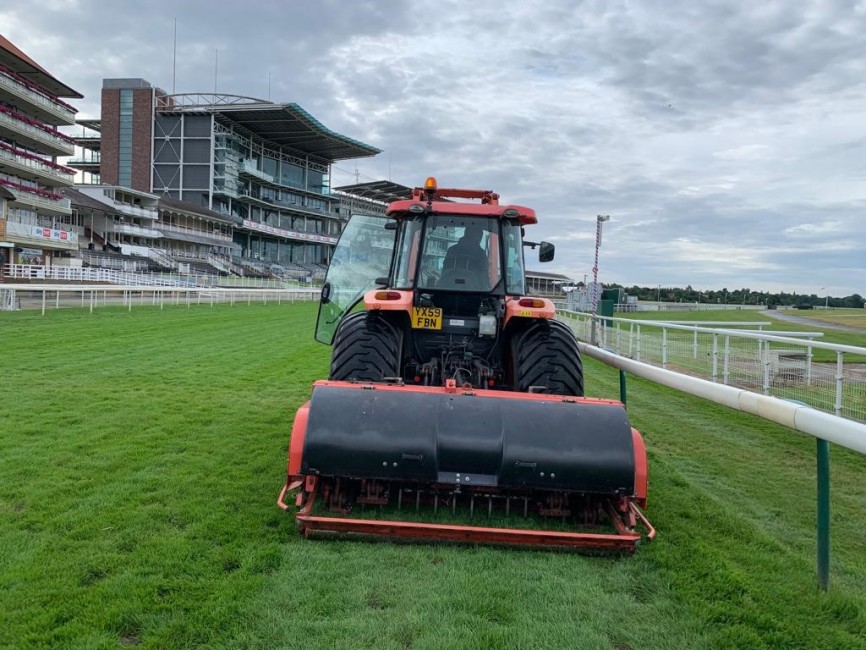 Opting to retain his original model, and not trade in in, Adrian commented: "Our XD8 is an integral part of our operation; it's not a luxury to have two Terra Spikes but a necessity. We will give the original machine a little bit of TLC and then we will run them both at once."

York's calendar of flat races traditionally runs from May to October. The season just concluded was unprecedented yet still brought many positives, with 122 races over 18 race days hosted. The 2021 season started with the Dante Festival in May behind closed doors, was limited to just 4000 race goers in June and early July and then a more normal return to racing followed July 23.

Adrian and his team have a tried and tested aeration programme that has brought consistency and maintained a high standard for the 15 years he has held post.

"The XD8 is out on the track after every race meeting to alleviate the compaction and damage from the various amount of horses running at about 50mph. We start the process by back filling all the damage from the hooves and then terra spike the day after. We've a steady team of 35 back fillers who set about the task with buckets of rootzone and seed mix. Every hole gets filled in and then we're good to go with the Wiedenmann.

"Sometimes we'll be on just the 20 mm tines, but we do move up to 25 mm tines when required, varying the heave and depth each time, according to conditions. We don't roll our course like some places choose to do; we can achieve aeration and decompaction as well as smoothing the surface with the one machine."

Adrian says during the off season the key is to go when the conditions are right and then after each meeting.

"We are out about twelve times a year aerating, decompacting and relevelling the surface. In total, we have over 10 hectares which gets done across 4-5 days, depending on conditions. Until now our mechanic/ grounds person Johnny Crowe volunteers for the job, enjoying the chance to be hands on and escape the workshop for a while to be on the course. We have a good system going. He splits the course into segments … so the home straight, the north bend, the back straight, the south bend and seven furlong chutes so aeration and de-compaction is done in increments.

"The whole action of the XD8 is gentle and smooth, even though it is 2.1 m wide, creating a lovely finish. If you walk behind while it is at work, you can see how the Wiedenmann's tine action treats the ground with respect leaving clean precise holes but still getting the required depth. You cannot help but be impressed by the job it does. If you wanted to race again straight after, you could."