Following reports in the late 80s that 700 new U.K. golf courses were needed to meet demand, the industry saw a spate of developments, many of which have now sunk without trace. Those that have survived are providing consistent quality and value for money, with the major responsibility falling squarely on the shoulders of the Course Manager.

Robert Upton has been in charge of course management at Romanby Golf and Country Club, Northallerton, North Yorkshire since the grow-in period in 1992. "There's an 18-hole championship length course, a six hole, par 3 academy course and a 12 bay, floodlit driving range," he says. "When I arrived the greens were just being built and the fairways were being seeded. Before we opened the following July 14,000 native tree species had been planted."

"This is good agricultural land," says Course Director Brian Craven. "It's free-draining, on the site of a glacial deposit and we've got a bit of everything. Blue clay, sandy loam - I farmed it for 17 years after leaving school and I know every inch of it." Brian, like many others saw the business potential in developing his farmland but once the planning consent came through in 1987 he knew that his agricultural background would not equip him to manage a golf course. "We knew we had to get some-one who was trained in greenkeeping," he continues. "There's quite a significant difference between the agricultural and greenkeeping disciplines and when Robert came he re-educated us."

Robert has USGA profile greens with an 80/20 sand/soil ratio. "With a sand content such as this, fertiliser is easily leached and therefore, after discussion we decided to use foliar feed a little and often," he recalls. David Snowden, Floratine's European Technical Director who has been working with Robert both here and on his previous links course at Cleveland explains that U.S. sand based constructions start off very free draining but as time goes on the physical and chemical aspects of the construction change dramatically. "In this situation a granular fertiliser would produce a good initial response but the benefits would be short lived," he says. "This leads to peeks and troughs or unwanted flushes of growth. 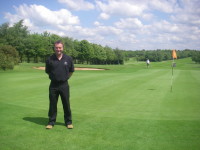 A foliar feed lasts from 10 days to three weeks and it's particularly useful in spring and early summer before strong roots have been established. Specific foliar products can help develop a strong root system and once the grass has done that and the soil temperature's warmed up then small amounts of granular or soil liquid fertiliser can be applied, alongside, with better results. The overall nutritional package will be far more cost effective."

Robert augments Floratine foliar feed products, P.K. Fight for phosphates, Astron to encourage root development, Carbon Power for potassium, Phlexmag and Phlexman for magnesium and manganese and Per4Max for density, with a soil liquid feed, as and when he sees fit. "I can tweak the programme and adjust the amounts of each foliar product according to the results of soil analysis which is done every year, and leaf tissue tests organised by David," he says. "I'll start foliar feeding in late March and continue throughout the growing season, finishing with lighter applications in the autumn." Robert also uses the soil amendments Defence Mag and Defence Man as water-soluble forms of magnesium and manganese and FP 747, a water acidifier, to reduce the pH of his spray solutions. The nutritional programme works alongside a stringent aeration regime.

"We hollow tine in March and late September and verti-drain once a month right through the winter," he says. "We've bought a Sisis aeration machine, which we use on the greens every three weeks in summer as it aerates without disturbing the surface, and when the grass is growing well we verti-cut every 7 to 10 days. Our new spinning top dresser gives a very light application which means that we can top dress 8 times a year, rather than 4 times annually as we used to."

The result of all this dedicated greenkeeping is that Robert has reduced his nitrogen input by half, from 240 kilos per hectare per annum to 120 kilos per hectare, reduced yearly fungicide applications from four to one and increased his percentage (over the last two to three years) of Bent grasses on the greens from 5% to 25%. "I'd like to have 100% Bent, but when you've got 200 acres of meadow grass mixed with Rye you can't stop the seed. I know courses where they hand weed the greens, but we just don't have the staff."

According to Brian Craven the members are more than happy with the greens as they are. "Golfers gauge a green by looking at it," he says. "They want it to look right i.e. green, and then they judge how it puts. Those with a low handicap want to make sure it doesn't bobble."

Robert is only too aware of the importance of keeping the golfers happy. "Especially now in a time of recession you've got to be efficient and provide the best facilities you can with the budget available. We're in a rural situation but if the course is right people will travel a fair distance to play. We have regular golfers from Durham and Leeds for example."

With a full time staff of four and three part-timers Robert maintains Romanby to the satisfaction of around 500 members, and as many visitors and societies. "We host about 40,000 rounds per year," he says, "and the members reckon the greens are the best they've ever been."