Scarcroft Golf Club was formed by a consortium led by Robert Blackburn, founder of the Blackburn Aircraft Company of Leeds, who later became the club's first president. Designed by Major Charles Mackenzie, the undulating course has a vast and rich variety of trees with spacious fairways and is set in mature parkland. 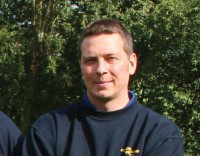 Completed in 1937, the 6456-yard par 71 course is often quoted by the local press as being "Yorkshire's hidden gem". This, in part, is due to its location, which is tucked away down a country lane on the outskirts of north Leeds. It is also in the 'golden triangle' of north Leeds courses with Moor Allerton, Alwoodley, Sandmoor and Moortown all within a short distance.

Whilst the course has rustic charm and is set in peaceful surroundings, it still offers a challenging test for both professional and amateur, and the course regularly hosts a number of prestigious golfing events throughout the year.

Whilst not long, the shot variation required is challenging, using every club in the bag. Some holes offer rewards to the golfer prepared to take risks, particularly if they take on challenges such as the par five 14th, where a good drive will tempt you to go for the green across a right hand elbow and over a newly formed lake. It is also the last club in the north Leeds area that does not require members to pre-book tee times.

A team of seven maintains the course. Led by Head Greenkeeper, Matt Houseman, the team is a mix of experience and youth with three of the staff being apprentices.

Matt, who became head greenkeeper in June 2008, has been at the club seven years. He arrived as a qualified greenkeeper from Harrogate Golf Club and now has amassed eighteen years of green keeping experience. His philosophy is one of pragmatism and that nothing is insurmountable. This rubs off, particularly on the apprentices, who show a keenness for tackling new jobs such as winter project work when new and different techniques and machinery are required.

The club encourages progression in both knowledge, experience and career advancement and, as such, have ensured all staff have reached a minimum of NVQ level 2 in sports turf maintenance and repair. Some have gone further or are currently studying. Three staff are qualified with full spraying certificates, three with chainsaw certification and one with a machine maintenance qualification.

The fifty-three bunkers, a multitude of burns, and several streams running through the course present varied maintenance challenges that are no different to

most other parkland courses. What is different is the wildlife, present in large numbers due to the rural location. This, on the surface, may appear not to be an issue but their attendant problems, such as droppings, adds to the day-to-day workloads of the greensstaff. However, the club encourages the wildlife presence, except of course when the rabbit population gets out of hand, when the contracted gamekeeper has to 'balance things out'. Regularly seen on the course are deer (Roe and the occasional Fallow), foxes, stoats and weasels, ducks, geese, moorhens, pheasants, woodpeckers, owls, red kites, buzzards, sparrowhawks, grouse and heron.

Further 'colour' has recently been added to the course in the shape of rhododendrons and azaleas planted around the rear of the 5th and 16th greens.

In the winter of 2007 the greens team began a project to create a lake in front of the 14th green. A generous member, who had wished to see a lake on the course for some years, had donated the money. The work started in November 2006, with the then present stream being diverted underground to make way for the lake. Large stones were purchased from a nearby quarry for the frontage and lake surround. An estimated 4000 tonnes of earth and spoils were removed to another part of the course and the lake bottom levelled and sealed with the already present clay. The surrounding turf was relaid, an estimated 2500 square metres, and bedded in before growth commenced in the spring. The lake was filled with water from the course's borehole and from rainwater. A pumping and top-up system was installed with water flowing through and over the stonework to form a waterfall feature.

Apart from a single contractor/digger, the staff carried out all the work. It was completed in February 2007, on time and to budget. It is now maturing into a very pleasing visual element, not to mention golfing challenge, of the course, which has attracted lots of wildlife.

The club has always been keen to promote and instigate environmentally beneficial maintenance and, as far as is practicable, to move away from chemical controls for disease.

Upon his appointment, Matt immediately implemented a mechanical greens improvement plan with the intention of achieving the same (if not better) consistency and speed results on the greens. He estimates that the full programme will take three years to complete to bring the greens up to his expectations. This programme commenced with deep verti-draining in September 2008, followed by the usual hollow coring in March 2009 along with topdressing, but with an additional topdressing and overseeding programme throughout the summer months.

During the summer months of 2009 the greens were cut to 3.75mm, no ironing or rolling, but plenty of mechanical work such as verticutting and micro-tining being carried out when gaps in the golfing calendar allowed. The results in this, the first year, have been encouraging with chemical spraying reduced by 10% and fewer applications of fertiliser. The greens are now at an acceptable level of consistency and speed. The environmental impact is yet to be assessed.

Last winter the club embarked on a greens drainage improvement project with the intention of laying herring bone drainage systems on nine greens. The work commenced in November 2008 and, whilst six greens were completed on time, a prolonged period of bad weather meant the remaining three were deferred until this winter. The average time taken for each green, from commencement to being back in play, was two weeks.

As a prologue the drainage runs on the greens settled down in time for the commencement of the season.

Scarcroft staff, with the exception of a contracted digger, carried out all the work. The three apprentices are now fully conversant with the methods and application of turf lifting, digging out, levelling, laying pipe work and the re-covering with gravel and rootzone material and now consider themselves experts at turf laying on greens.

The team use mainly Toro equipment, with the usual mix of triples for greens, tees, bankings and surrounds. A Toro 6500 is used on fairways, a tractor towed rotary for semi rough and a zero turn for other areas. Other equipment used for project work includes trenchers and gravel/sand banders. They also have a 'back-actor' and front bucket attachments for large earthmoving operations or tree stump removal, again allowing them to take on project work themselves.

Some of the newest pieces of plant purchased are a Trilo BL 960 blower and Weidenmann Super 500, which have proved essential for leaf removal from fairways (given the number of deciduous trees present) and the cleaning up of recently cut wet fairways and approaches.

The club are planning to buy a digger during 2009/10 to enable them to be more independent of outside contractors and to carry out their own drainage and irrigation channel requirements.

The latest equipment to be purchased are two Bernhard grinding machines to sharpen both cylinder and bottom blades. This will enable more sharpening during the cutting season and improve both the appearance and quality of cut and make the club even more independent of contracting out.

With so many trees present on the course there is plenty of activity in the autumn and winter months pruning and shaping the trees and shrubs. Some of the thicker branches are cut into two metre lengths and stacked for the wildlife to use, particularly hedgehogs. Some of the larger logs are cut into short lengths and taken by members and staff for log burning fires.

The greens staff are investigating the effects of using 'hard water' on greens and tee irrigation. Yorkshire is renowned for limescale (calcium carbonate) problems, which is the main cause of hard water. The investigation is ongoing.

On 22nd July Enviropro H2o held a workshop at the club. The intention was to reveal some of their techniques regarding irrigation problem solving and maintenance. Several clubs in the area attended with Laurence Gale of Pitchcare reporting on the gathering. It was felt by all who attended, including Enviropro, that it had been a very beneficial exercise.

Although Matt and the greens staff at Scarcroft Golf Club have undoubtedly been very busy, the future programme to further improve the course will see them face new challenges. However, their ecologically-sound and environmentally-aware approach and the commitment and skills of the whole greens team, supported by the membership, will help ensure that anyone visiting Scarcroft Golf Club will know that it really is 'Yorkshire's hidden gem'.