1 You never quite know who you are going to meet in this job!

Here Gareth talks about his maintenance regime and his plans for the course, hopefully with some help from his more famous brother.

The Woosnam brothers have had a long association with Oswestry Golf Club. It began when their father joined the club in the mid 1970's and his two sons soon became active junior members.

In 1974 Gareth, a promising golfer in his own right, brought distinction to the club when he represented Shropshire Schools in the Midland finals and went on to represent Wales at youth level.

However, Gareth did not have the same drive and ambition as his older brother and found himself being drawn into golf course management. He began working on the course on a part-time basis before finally joining the full time staff in 1983. He was promoted to Assistant Head Greenkeeper in 2002 and then to Head Greenkeeper in 2004 when J. W. Humphreys retired after 33 years in the job.

Since taking over as Head Greenkeeper Gareth has implemented a number of changes to the maintenance regimes. By changing the definition of rough and semi-rough areas, when mowing, Gareth has been able to subtly alter the layout and tighten up the course. This, in turn, has resulted in changes to mowing frequency and height of cut.

Throughout the summer the greens are cut, on a daily basis, to betweeen 4-6mm using a John Deere 2500A Triple. This is increased to 6-7mm in winter. Tees are cut twice a week to 10mm in summer and 12mm in winter using a JD 2500 Triple.

The collars are maintained to a height of 20mm throughout the year, using a JD 2653A Triple twice weekly. Fairways are also cut twice a week to between 16-19mm with their JD 3235B Cylinder Mower. The semi-rough gets a weekly cut to between 25-40 mm using Lloyds 5 gang trailed cylinder units, and twice a year the rough gets topped to between 50-75mm with a JD 1600 Triple Deck Rotary Mower. 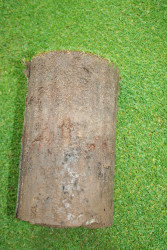 Most of the machinery has been bought outright with the exception of the John Deere 3235B which is on a lease scheme. Currently, the club does not employ a full time mechanic but uses Paul Walker of Green Paw who provides an on-call repair and maintenance service throughout Shropshire.
With so many mature trees on the course one of the biggest jobs during the winter months is keeping the course clear of leaves. Their Billy Goat vacuums and Tornado blowers and leaf collectors are in constant use throughout November, December and January.

The greens are aerated and topdressed, on a 'little and often' basis, in between the traditional spring and autumn renovations. Gareth aerates with 5mm pencil solid tines once a fortnight and topdresses with a light dressing - half a ton of Ruffords 17/42 dressing material.

This year, for the first time, he was able to vertidrain and oversow the greens in early August. The results are proving successful with improved surface drainage, firmness and colour to the greens. A Vertidrain is the one piece of machinery missing from their portfolio but Gareth hopes that this will be added soon. Currently they have to hire this service. Owning their own would give them much greater flexibility.

This year's winter work will include rebuilding the 16th and 18th competition tees; all the work being done in house. Gareth will use turf lifted from his own nursery for the banks and has brought in over 350 metres of Inturf (bent and fescue) turf for the tee tops. Dwarf perennial rye turf is also being used to repair some high traffic wear areas around the course.

Four new artificial winter tees have been installed, the first installation was carried out by contractors, however, once Gareth and his staff saw what was involved they decided to do the rest themselves, saving the club a considerable amount of money in the process.

These artificial grass tees mats are 12ft x 12ft and are laid on a stone and sand base and then infilled with sand and rubber crumb.

Other winter work will see further clearance of wooded areas to thin out tree plantings and improve the wildlife corridors of the course; wood is stacked to encourage insect activity. A programme of bunker refurbishment is being planned to reshape and change the sand content in all 53 bunkers. This work will be carried over a number of years.
The club also enlists the services of the STRI who carry out three course inspections each year to advise on maintenance and development issues.

Looking to the future, Gareth would like to see some new features on the course including water hazards that can double as a resource for the irrigation system. He as already asked Ian for his input thereby ensuring that the Woosnam brothers will continue to support their favourite course in one way or another for years to come.