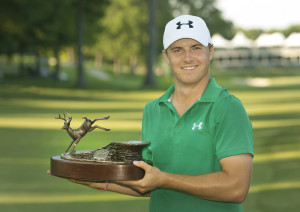 There were several shocks at this year's John Deere Classic in July, not least the surprising youth of its winner, Jordan Spieth. Only 19 years old, Spieth is the youngest person ever to win the Classic, and the first teenager to win a PGA Tour event in 82 years.

Spieth beat off the challenge of defending champion Zach Johnson, who took the lead in the first round but later lost out in a play-off.

With this first PGA Tour victory, Spieth won a spot in the following week's Open 2013 Championship at Muirfield, where he finished tied at 44th.

Both Johnson and Spieth were among the golfers flown on the Classic's chartered jet to Scotland, an arrangement started by the event in 2008 in order to attract more international players.

This has proved very successful, as this year 40 out of the 156 players were non-US nationals, and as in previous years, the largest foreign contingent hailed from Australia. The field competed for total prize money of $4.6 million USD, with the winner's share amounting to $828,000.

The John Deere Classic, founded in 1971 as the Quad Cities Open, joined the list of official PGA Tour events in 1972. John Deere assumed title sponsorship of the event in 1998, and currently hosts the tournament annually at TPC Deere Run in Silvis, Illinois, not far from the company's worldwide headquarter 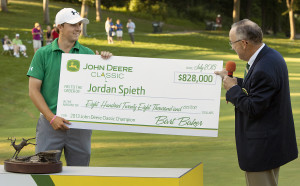 In 2012, the event helped to raise $6.79 million USD for various charities, and it ranks among the top five PGA Tour events in overall charity donations.