A South Yorkshire Social Club has had its football pitch re-constructed as a direct result of a sewer replacement scheme.

Malin Bridge Social Club near Sheffield, whose pitch is built on the spoils of a former tip, was to be undermined by part of a 400-metre tunnel buried approx 30 metres below the surface.

"The tunnel, is a replacement for the old foul sewer, which serves the city and runs along the bank of the river Loxley," says Eugene Huxley-Wright, site Forman for Earch Tech Morrison (ETM), the combined companies of Earch Tech Engineering and Morrison Construction who are fulfilling the three year contract for Yorkshire Water. "As the tunnel goes through broken ground, we've installed 230 grout holes 30m deep, which we've drilled into the ground and fractures in the rock, and then filled with pulverised fuel ash mixed with cement. Once this area had been stabilised, we were safe to tunnel underneath." "ETM had already taken the old turf from the centre of the pitch to grout this area before we arrived," he says. "After stripping the rest of the turf and levelling the surface I sub contracted the new drainage to York based L Philliskirk and Son who have a Mastenbroek 1012 trencher, capable of digging through concrete."

"At first we used our sports field digger, the Mastenbroek 1012D to dig the main drain," remembers Warren Philliskirk, MD for the company. "But although we'd already marked out the grouted areas in order to avoid them, we soon had to revert to the heavy duty machine to deal with the concrete bricks and hardcore we were finding beneath the surface."

Philliskirk and Son installed a new main drain along the bottom of the pitch, with laterals at five metre intervals. "We used perforated flexible pipe, 100 mm diameter for the main drain and 80mm diameter for the laterals, and back filled with gravel to within approx 150mm of the surface," explains Warren Philliskirk. "We finished off by applying root zone up to surface level." 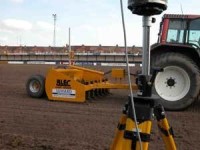 Once the drainage was in place, Seward returned to site and cultivated, laser graded and re graded the surface before seeding.

"The club want to play on it this season," says Mike Seward, "and I can't see any reason why they shouldn't. We left at the end of May, and the whole sewer replacement contract should be completed by the end of July."

Eugene Huxley-Wright says that Yorkshire Water was bound to re-instate the Malin Bridge football pitch as part of the £1.5 million scheme.

For further information on the services of Seward Turf Maintenance, contact the company on Tel: 01904 765949