by Viv Mitchell
in Synthetics, Conservation & Ecology, and General Interest
on 24 Oct 2020

3 3G Pitches: Is the UK sleepwalking into a public health crisis?

Almost three years ago I was enjoying my retirement, making lots of happy memories with my grandchildren. Then I found out that our council wanted to build a 3G rubber crumb football pitch right next door to their primary school. This triggered something that I'd read earlier about a young goalkeeper getting cancer after playing on these pitches. I had to find out more.

This was of concern to me personally as my family and friends enjoy playing and coaching football, as well as for the 630 pupils who attend the primary school and the residents who live in the surrounding homes.

I am extremely disappointed that our government and sports organisations are not taking action to safeguard health. Even more so when I found out that officials from government health departments and sports organisations had held meetings and decided that it wasn't in the public interest to disclose the cancer risks! How on earth can this not be in the public interest?

Instead, Sport England and the Groundsmanship stakeholders put the onus on the players and parents to keep themselves safe and produced hygiene guidance notices. But our council has refused to post these notices and I suspect that they're not the only council or club that doesn't want them to be seen.

It seems that most people who play and work on these pitches are unaware of the life-changing consequences from the toxic chemicals in 3G rubber crumb artificial sports fields. This concerns every single person who plays or works on these fields, and people living and working nearby, as the invisible dust will blow around and pollute the surrounding area.

But you're not just risking cancer. The carbon black in the dust gets into your body, causing serious damage to your lungs. 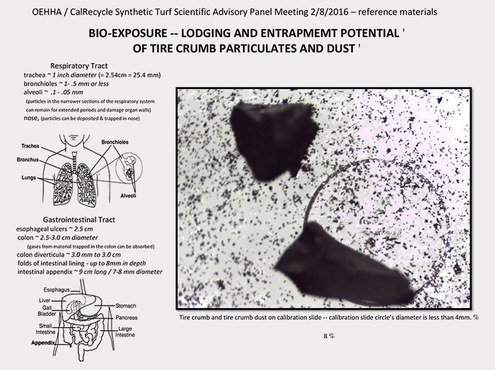 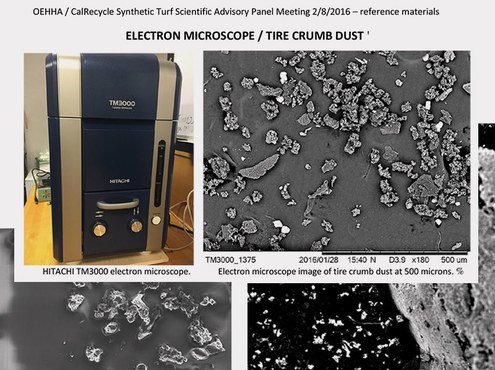 Environment Agency Reports stated that rubber crumb is always waste and is unsuitable for sports surfaces. So why is our government allowing this material to be used and why are our children encouraged to play on it?

Yale has identified 306 chemicals in rubber crumb, 197 are carcinogenic or suspected carcinogenic. Some are also mutagenic and endocrine disruptive.

I read about Amy Griffin's list of sports players who contacted her who had developed cancer after playing on rubber crumb pitches. Amy was visiting a young goalkeeper having chemo, talking about goalkeeping, when a nurse walked by and commented that this young girl was the fourth goalkeeper that she'd hooked up that week.

The ECHA Annex XV Report contained inconsistencies and listed their assumptions and uncertainties.

Benzene caught my eye. It may be fatal if swallowed and it enters airways, may cause genetic defects, may cause cancer, causes damage to organs. Due to the genotoxic and carcinogenic effects of benzene, no safe level of exposure can be recommended.

The extremely high toxic levels of the PAHs really floored me. Six of the PAHs are allowed to be up to 2,000 times more toxic than that allowed in children's toys. This was the direct result of the intense lobbying by the tyre and recycling industry and the EC, who persuaded RIVM to take the pragmatic point-of-view and re-classify rubber crumb from an article to a mixture as a multi-billion dollar industry was at stake.

There should be no human skin contact with mixtures. But the crumb and dust flies around with every single footstep and is inhaled, swallowed and embedded in cuts and grazes.

Somehow, the stakeholders decided that it is safe for our children to play on toxic chemicals! How on earth can this ever be safe?

ECHA has now reduced the PAH levels to 20mg/kg, effective soon, but still 40 times higher than allowed in toys. The new levels will not apply to existing pitches so our children are still at risk.

Roelof Bosma has made several documentaries about rubber crumb and artificial football pitches. The airing of this documentary in the Netherlands resulted in about 2,000 rubber crumb pitches being ripped up. 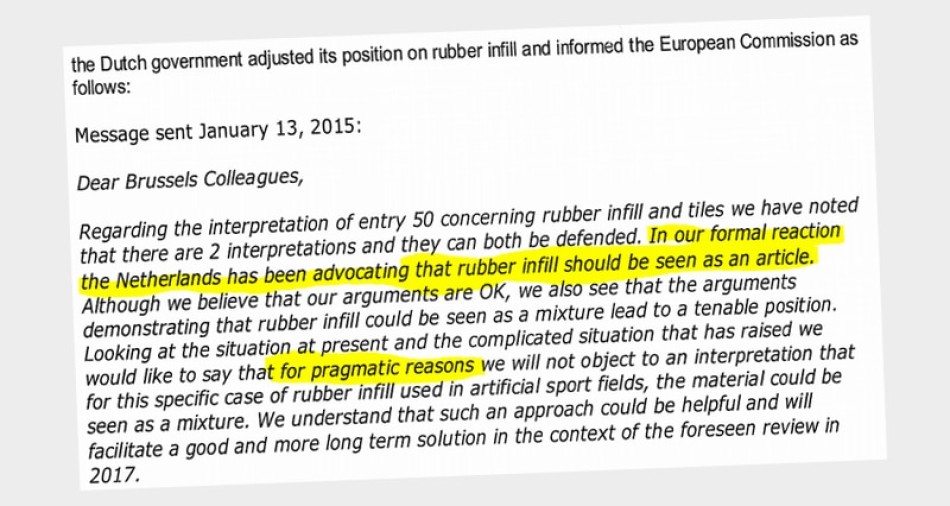 Mark Murfitt, the owner of Murfitts Industries, gave an interview in which he questioned how he is allowed to supply this material containing known carcinogens. He says it is "not tenable" and "totally illogical". But he still continues to supply it!

The more I discovered, the more frightening it became. This was consuming me, taking over my life. It just isn't right that children are getting ill, some dying, just because they want to have fun kicking a ball around.

As you will already know, microplastic pollution from tyres is also an enormous problem. As well as polluting our world, this also contributes to air pollution along with exhaust emissions.

But this dust gets into our oceans too and has even been found in the Arctic.

This is something that we should have addressed many years ago.

I was heartened to see the Fully Charged Live discussion with Eunomia at Silverstone last Summer. I was especially pleased to hear G Erlendsson talk about the progress being made by his company, Enso Tyres. G also talks about rubber crumb in sports applications.

At the end of the projected life-span of these pitches, there are more environmental pollution issues. They are worn out, so most end up in enormous piles, hidden away.

I thought it would be interesting to see how much waste is generated by these pitches.

The rubber crumb used as infill in each artificial pitch consists of about 20,000 end-of-life tyres, ground into 120 tonnes of crumb and dust, with more used as support layers. The grass blades are made from virgin plastic equivalent to 1,400,000 plastic bags. Each 3G pitch weighs about 220 tonnes.

But this isn't all. There will be even more plastic waste from discarded artificial turf in other situations, particularly from gardens and from pitches without infill.

Also, we would have the rubber crumb that washes off after showering, washing kits, cleaning boots, etc, that ends up polluting our oceans. According to Eunomia, in the EU up to 72,000 tonnes ends up in our oceans annually.

As these pitches have a relatively short life-span of about ten years, they will be removed and replaced with more rubber and plastic. Even if some of this is recycled, it will still exist in our world in some form or another, breaking down into tinier and tinier microplastics which will continue to pollute and poison our world, our oceans, our food chain and, eventually, us. We cannot recycle our way out of this.

But it gets even worse. This is just the EU's waste. Can you imagine just how much waste is generated by 3G pitches and artificial turf installations throughout the rest of the world?

Our grandchildren, all our following generations, will wonder why we let this happen, why we didn't do all we could to keep our world safe and viable. This waste contributes to climate change too, so we've really messed up their future.

So, we're harming health, polluting our environment and poisoning the food chain. We just can't carry on as usual, we actually need to take urgent steps to rectify this.

We can't stop driving, we will always need to get about. But G (Enzo Tyres) has made great progress, and given us hope, with more resilient tyres. Robert Llewellyn has given us hope too, please read his "What we might see in the next 10 years" New Year's Day blog.

Unfortunately, these new ideas will take some time to become mainstream.

Fortunately, we can take some actions almost immediately to help to protect health.

Obviously we can't remove every single 3G pitch tomorrow. We could make sure that the Sport England/Groundsmanship Health Guidance notices are posted by the pitches. We could impose minimum age restrictions, the same as there are for smoking and alcohol. And we could start removing the rubber crumb and replacing it with safer, non-polluting natural infills of which there are several, ground-up olives stones being the latest with no negatives. We could stop installing new and replacement 3G pitches, and build natural grass pitches with more substantial drainage layers and tougher grass instead.

I thought about other incidences that have had life-changing consequences to health. I consider that the use of rubber crumb in sports fields and other applications to be a world-wide public health scandal on a par with the asbestos, BSE, Thalidomide, PFAS (Dupont), and infected blood scandals.

The first priority of our government is for the safety of its citizens. Shouldn't our government take all possible measures to protect our environment too?

When the proverbial eventually hits the fan, which it will, how will our government and sports organisations spin this? They can't. The evidence is out there, freely available on the internet for all to see.

You may wonder what happened to the young goalkeeper who inspired my research. Very sadly, he didn't make it. The brutal treatment took its toll.

My family and friends have been listening to me for nearly three years now. Actually, to be fair, they didn't really have much choice. They love their football and will continue playing and coaching but will not be going anywhere near these toxic pitches. I hope you won't either.

Viv Mitchell has been researching this for a few years, having previously experienced a variety of interesting positions in many different areas. Her aim is to raise public awareness of the health risks, environmental damage and air pollution from these pitches.