by External source
in Industry News
on 17 Dec 2014 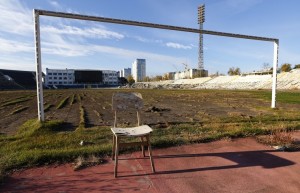 December 12 - Volgograd's new football stadium for the 2018 World Cup in Russia, being built on the site of the old Central Stadium, will be completed in November 2017, according to local government officials.

The stadium will be part of a sports complex that already houses a swimming pool and an athletics track. A basketball centre will also be built.

Local Volgograd government are claiming the project is a triumph for local firms with about 40 local companies already contracted to provide materials or work on the on the stadium.

The lead contractor for the 'Arena Pobeda'/ 'Arena Victory' is construction giant Stroitransgaz, but local firms are benefiting as well, but core materials like steel, concrete and cement will all be sourced locally

The first step is the demolition of the Central Stadium which is expected to be complete next week, with the first foundation stone expected to be laid before the New Year. Full ground work will begin in January, while a 'construction city' for 1,000 workers will be set up.

Volgograd's assistant governor Vasiliy Galushkin said that the running costs of the stadium will be 18-20 million Rubles ($314-349,0000) per month, and that it is important these costs are covered in future operations.