by Editorial
in Pests & Diseases and Technical
on 13 Mar 2017

1 A cast of thousands or ‘purity’ of thought? 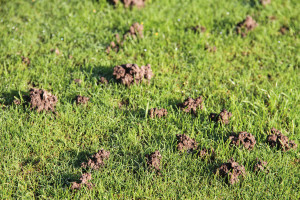 With the withdrawal of carbendazim this year, turfcare professionals across the UK will have concerns surrounding worm casts and the damage they will do to sports surfaces. Is there anything 'out there' that might help in the battle against these subterranean intruders?

Earthworms can be divided into four groups, called ecotypes, each of which describes a different ecological grouping based on its behaviour.

As their name would suggest, these are most likely to be found in compost, or areas very rich in rotting vegetation. They prefer warm and moist environments with a ready supply of fresh compost material. They can very rapidly consume this material and also reproduce very quickly.

Compost earthworms tend to be bright red in colour and stripy - some people call the stripy species 'tiger worms'. Compost worms are often used to help dispose of waste as they can also remove contaminants from soil.

Epigeic earthworms live on the surface of the soil in leaf litter. These species tend not to make burrows, but live in and feed on the leaf litter. 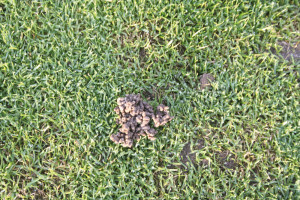 Epigeic earthworms are also often bright red or reddy-brown, but they are not stripy.

Endogeic earthworms live in and feed on the soil. They make horizontal burrows through the soil to move around and to feed and they will reuse these burrows to a certain extent. Endogeic earthworms are often pale colours, grey, pale pink, green or blue. Some can burrow very deeply in the soil.

Anecic earthworms make permanent vertical burrows in soil. They feed on leaves on the soil surface that they drag into their burrows. They also cast on the surface, and these casts can quite often be seen on tuf areas. They also make middens (piles of casts) around the entrance to their burrows. Anecic species are the largest species of earthworms in the UK. They are darkly coloured at the head end (red or brown) and have paler tails.

It is accepted that earthworms offer huge benefits to their chosen environment and they are often referred to as 'ecosystem engineers'.

Much like human engineers, earthworms change the structure of their environments. Different types of earthworms can make both horizontal and vertical burrows, some of which can be very deep in soils. 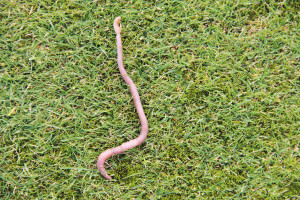 These burrows create pores through which oxygen and water can enter and carbon dioxide can leave the soil. Earthworm casts (their faeces) are also very important in soils and are responsible for some of the fine crumb structure of soils.

Earthworms play an important role in breaking down dead organic matter in a process known as decomposition. This is what the earthworms living in your compost bin are doing and earthworms living in soils also decompose organic matter. Decomposition releases nutrients locked up in dead plants and animals and makes them available for use by living plants. Earthworms do this by eating organic matter and breaking it down into smaller pieces, allowing bacteria and fungi to feed on it and release the nutrients.

Earthworms are also responsible for mixing soil layers and incorporating organic matter into the soil. Charles Darwin referred to earthworms as 'nature's ploughs' because of this mixing of soil and organic matter. This mixing improves the fertility of the soil by allowing the organic matter to be dispersed through the soil and the nutrients held in it to become available to bacteria, fungi and plants.

There are twenty-eight species of earthworm native to the UK, as well as a number of non-native species brought in by accident through the actions of humans - for example in the soils of imported exotic plants. Each species exhibits unique behavioural and physiological characteristics, their distribution being influenced by soil pH, soil texture, organic matter, mode of feeding, life style and their location within the soil profile.

Maybe surprisingly, only a small number of species actually produce the casts which are deemed such a nuisance on sports turf. The most abundant of the casting species is Lumbricus terrestris, which is also the UK's largest species at 90-170mm in length. This earthworm is nocturnal and forms a permanent vertical burrow opening onto the soil from which it forages for food. 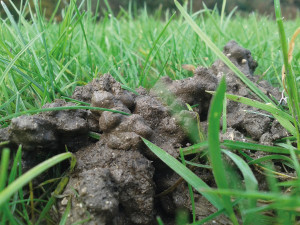 It is this beast of the underworld that causes so many problems to groundsmen and greenkeepers and, come the end of August, there will be no legal control for casting worms.

Carbendazim will be withdrawn from sale at the end of May 2017, with all stocks having to be applied by the end of August. After that, there is nothing, ziltch, diddly squat etc.

Or is there? Recent posts on the Pitchcare forum have been suggesting that a product being marketed as a soil conditioner is having an affect on casting worms, either as an irritant or by killing them; the jury is still out, but the latter does also appear likely.

Postees discussed the product at some length and argued that it contained either tea seed meal or mowrah meal (a once popular treatment for worms), along with other ingredients such as seaweed and poultry manure.

The USGA started researching tea seed meal in autumn 2007 to determine if it could be used to reduce earthworm casts on playing surfaces. One of the authors of the research, Daniel A. Potter, had attended a sports turf conference in Beijing, China in 2007 where he learned of another natural substance used there to suppress earthworms and casting on sportfields. The method involves applying a by-product of tea oil manufacture. Tea seed oil, pressed from seeds of the Chinese tea oil plant, is used for cooking in eastern Asia, and in soaps and shampoos, margarine, ointments and other products. Although tea oil websites claim efficacy for earthworm control, a 2007 search of the worldwide scientific literature found no references or data supporting that claim.

The initial tests were with crude tea seed meal pellets (3.2mm diameter; 5-8mm long) and powder obtained from a source in China. The latter, essentially a dust, proved awkward to apply, so later work focused on the pellets. Application of tea seed meal at 6lbs of material per 1000ft2, followed by irrigation, quickly expelled as many as 200 worms per 10ft2 on the pushup green. Most of the expelled worms dried up and died on the turf surface. 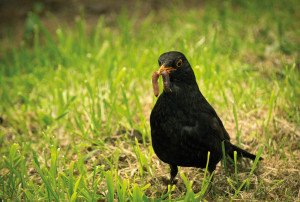 A single tea seed meal application in early April 2008 reduced castings in replicated plots on the push-up green by more than 95% for at least five weeks. In another trial on the push-up green, application of tea seed meal in early October reduced casts by 98% after two days, and 83% after thirty days. Finally, a sequence of lab trials confirmed that the chemical basis for tea seed meal's activity on earthworms is the natural triterpene saponins found in tea seeds.

The previously popular mowrah meal method involved applying powdered product from seeds of Bassia latifolia, the butter tree of India, after the edible oil had been pressed out. Natural components in mowrah meal irritated the earthworms, causing them to come to the surface where they were raked into piles, shovelled into wheelbarrows, and hauled off the site.

The method, established by British greenkeeper Peter W. Lees during the 1890s, was so effective that it had become the mainstay for earthworm suppression on European and United States golf courses by the 1920s.

The method is regarded as among the most important historical innovations in turf management, in part because it allowed expansion of British golf courses on upland soils previously ill-suited for golf because of the unplayable putting green surfaces caused by earthworms. At one time, at least a dozen proprietary fertilisers and other products containing mowrah meal were marketed for earthworm control on golf courses. The use of the method declined in the late 1940s and 1950s with the development of chlordane and other earthworm-toxic synthetic pesticides.

Mowrah meal is rich in saponins, natural soaps or surfactants found in the leaves and seeds of oats, spinach, alfalfa, chickpeas, soybeans, ginseng, tea and hundreds of other plants. Although saponins were never confirmed as the earthworm-active component in mowrah meal, it is highly likely that their detergent-like irritation of the earthworms' mucus membranes was the basis for its effectiveness. Mowrah meal is no longer marketed for earthworm management.

So, is Purity (or similar product), the cavalry galloping over the horizon to save the turfcare professional troubled by casting worms? Most that have used it for that purpose reckon so, although some have seen no results. Either that, or they had no worms in the first place, which seems unlikely.

Remembering that these products are marketed as 'soil conditioners' only, is the groundsman or greenkeeper right to be using it for another purpose? What if the pesticide police get wind of this extraneous use?

More importantly, what damage is being done below the surface where hundreds of harmless worms are going about their daily lives, enriching your soil beyond most mechanical methods you employ or products you apply? What if these worms are being killed off too, which would seem likely? Are you really going to able to work with dead soil in a couple of years time?

Until such times as a machinery manufacturer comes up with a machine to 'thoop' up worm casts, employing the vacuum method, perhaps we are all going to have to simply put up with them from September onwards.

We're off to give James Dyson a call to see if he can help us design the Super Thooper!

With thanks to the Earthworm Society of Britain www.earthwormsoc.org.uk and the USGA www.usga.org