Any machinery that can save labour and time is a welcome investment for any club, especially the Royal Cinque Ports Golf Club in Kent which has such a packed schedule of maintenance and play. In March this year they took delivery of a Rink DS3800 bulk topdresser from Charterhouse Turf Machinery to help. The club has been the host of many high-profile events since its formation in 1892. This year is no exception with Course Manager James Bledge and his team hosting the largest amateur foursomes tournament, the Halford Hewitt, in April and then in July the Final Qualifying event for The Open. 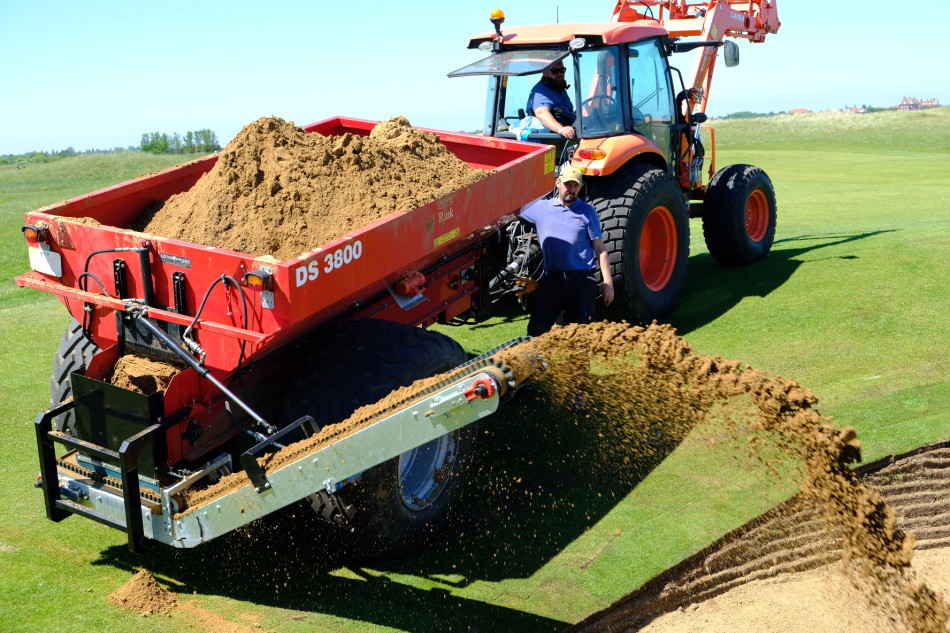 "Though a team of 9 sounds like quite a big team, the golfers expectations are really high so with our maintenance regime, time is of the essence. When it comes to topdressing we have a small topdresser which we use on the greens but this involved 2 guys filling it by hand - a hugely tiring task. If we wanted to do all the greens and approaches, that's 33 tonnes of sand shovelled by hand!"

One of James' closest friends, Lee Strutt at the Royal Automobile Club, purchased a Rink DS3800 last year and organised with Charterhouse to transport it to Royal Cinque Ports for James to demo. "I'd commented on it when I'd visited the RAC and having it to try just confirmed that it was exactly what we needed. With this we can fill our smaller unit and topdress all the greens in under 4 hours, getting out and round without being caught by play. I worked out how this equated to time and labour savings and that really sealed the deal."

The Rink DS3800 is the largest model in the Rink range offering a spreading width of up to 15m, spreading thickness of up to 15mm and a hopper capacity of 3.8m3. It's also available with an optional cross conveyor which James uses to feed the smaller topdresser and also for work on the course's bunkers.

"This unit is 'big and beautiful' here it's all about productivity and getting the job done quickly and efficiently. The Rink has also freed up my guys who I can now put to other uses elsewhere. All of this made the purchase a no-brainer and it really has been a great addition to our fleet."