"To put one inch of water on the entire course requires 1.5m gallons through the irrigation system" 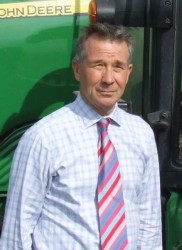 Getting Cheltenham Racecourse ready for its winter jump racing season involves a lot of hard work and a LOT of water. With no significant rain since March - bar the traditional August bank holiday deluge - irrigation has been a vital part of the regime this summer. Some six million gallons of water were applied to the course in July and August to limit the amount that the clay soil can crack ahead of the first meeting in October.

"The problem is that we can no longer rely on the weather patterns to provide sufficient rain from July to October," explains Clerk of the Course, Simon Claisse. "Even when rain is forecast for Cheltenham town, the position of the racecourse between Cleeve Hill and the Malverns often means that it skirts us altogether."
Cheltenham's irrigation regime has been developed and refined since 2003, when the hot summer caused cracked soil that threatened the October meeting. Water was purchased from Severn Trent at great expense that year, but increasing the course's extraction licence from 10m to 13m gallons per year made it self-sufficient until 2009.

Now, the abstraction point has been re-sited to the confluence of the two brooks that feed the reservoir, allowing water to be taken from a greater area in a dry year. The brooks are fed with 9 billion gallons of storm water which falls onto the site, much of which runs from the racecourse's storm drains - ironically, pumping this straight into the reservoir would restrict the amount that the Environment Agency allows the racecourse to abstract.

A new pit and pumps have increased the flow rate of the system to make the most of this much needed water, as Simon explains: "To put one inch of water on the entire course requires 1.5m gallons through the irrigation system." Water is applied to the course using rain guns, each of which offers 70m coverage, and have recently replaced a boom system.

"In windy weather, there is more drift with booms, whereas the guns have a lower trajectory and produce larger droplets which minimise drift," says Simon.

The guns are fed via six reels - four Briggs, one CIPA and one Javelin, with four working at any one time with the existing pump. A new pump is being installed in December with an increased output, enabling all six guns to run simultaneously.

The groundsmen work to an irrigation pattern designed to reduce traffic on the course, with the guns directed at either the hurdle or chase track on the Old and New courses, to avoid wasting water in between. A 110hp John Deere 6330 Premium tractor was recently purchased to pull the big reels up Cheltenham's famous hills. 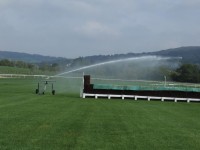 "Watering takes a lot of management," comments Simon. "We have a wide variety of soil types and undulating ground, plus some parts of the course are drained and others are not. We have to make the surface consistent, so we have to be selective about where we put different quantities of water."

While the undulations are part of the Cheltenham's character and challenge, keeping the racing surface level enough not to unbalance horses is important. So, a regular task is to remove 'crowns' from around the fences, where soil is pushed up over time and is built up by repair work. This involves digging out 30-40 cubic metres of material, levelling and reseeding.

"We have done three more this year and have a couple more to do in the closed season next year," says Simon. "It is important to do this work periodically, but not so often that it affects the stability of the take-off and landing."

The course's four road crossings have also been dug out, and their edges straightened, to remove woodchip that migrates into the soil below the turf. This is exacerbated by the pounding of emergency vehicles and the television tracking cameras, and gradually makes the crossings wider. The edges are then reinstated with soil and seed or turf. With the woodchip removed, it can be seen that the road surface is some 6in below the level of the turf, designed to minimise concussion on the horse's legs when they gallop across the freshly wood chipped crossings.

Wood chip has now been taken out of the 'canter downs' where horses go down to the start, and replaced with a sand based material designed to be more stable. The new surface also needs less maintenance and topping up.

Diggers were also used to remove a 'hump' on the home straight to take into account the resiting of one of the steeplechase fences, part of a continual review of safety standards on the course.

"The second last fence on the Old course had become an issue," explains Simon. "Some horses would jump it well, and then lose their balance on landing. We assess all falls data, and look to minimise the risks if one fence looks significant. We reprofiled the landing and take-off and altered the levels perpendicular to the fence and along it; but horses were still falling more than expected, so we decided to move it." 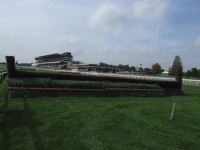 A new site was chosen next to the equivalent fence on the New course, which has always jumped successfully, and a temporary fence positioned to assess the improvements.

"If it works, we will put a permanent fence here, but it makes sense to use a temporary fence, initially, until we have its siting spot on," says Simon.

Caring for the turf itself involves 'almost constant' mowing in the run up to the season, with feeding kept to a minimum to avoid bolting of the sward in warm temperatures.

"Even with plenty of mowing capacity, we have to cut little and often to keep on top of growth and avoid leaving too much material on the surface - we can vacuum if necessary, but this involves another pass." Mowers are a Ransomes HR9016 with 5m cut and 3.5m John Deere 1600 and, a new addition for this season, a three deck tractor mounted unit with a 7m cut from Port Agric, built especially for Cheltenham. Unusually for a turf mower, it comprises one deck on the front linkage and a pair behind; with the rear mowers removed, it can be used for maintaining smaller areas.

Whilst racecourse turf may seem relatively low maintenance compared to, say, a golf course, ongoing monitoring of its condition is essential to prevent problems with the vast areas of grass.

"We're constantly vigilant for any signs of disease or pest infestation," says Simon, "as we aim to minimise the use of pesticides, both for the cost of treating such a large area and to reduce environmental impacts. Small areas of chafer grub infestation are spot treated, if they arise, and then reseeded to avoid the need to spray the whole course."

He comments that he is advised by Head Groundsman, Tony Howland, together with the racecourse's retained STRI agronomist, Steve Gingell, who are constantly studying the latest grass varieties, and believes that huge strides have been made in his 21-year racing career. "The industry has gone from agricultural ryegrass mixtures to specialist sportsturf mixes that will only grow to 15cm," he says. "Our ideal is grass that establishes quickly and continues to grow in low temperatures and, although we are not there yet, progress is definitely being made."

Verti-draining and hollow coring, to incorporate organic material on areas of fast ground, are undertaken as needed, while the Festival running lines and the take-off and landing areas are scarified and reseeded in late spring.

Areas where the footing could be perceived as less crucial are not neglected. This spring, the unsaddling enclosure had new pipe drains and sand slits installed by contractor, DW Clark Drainage.

During June and July, the running line of the Gold Cup course was vertidrained by contractor, ALS, together with hollow coring parts of the track which had culverts underneath them. These areas had been running faster than other parts of the track, so the core holes were infilled with humus to slow them down.

The extensive area of ground covered by the racecourse means that battling severe weather is a major challenge. "We can't use undersoil heating because of the need to decompact the surface from time to time and, although we have looked at solutions, including blowers and heaters, it would be too costly," explains Simon.

As part of the Jockey Club Racecourses group, Cheltenham has access to 500 frost covers, but Simon comments that they are not the perfect solution.

"At one of our sister racecourses, the covers were removed in the morning and then sleet fell and froze the course again," he reports. "Another issue is that, to get to the covers, the groundsmen have to walk on frozen ground, which can itself damage the turf."

Simon adds that it is not just the course that has to be considered, but also the public areas and horsewalks which may remain too dangerous to be used. "Gritting is a huge task, because you have to make the whole racecourse safe, not just the racing surface."

In the 2009-10 season, the covers were used twice, and Simon admits that the New Year's Day meeting was touch and go, although it went ahead successfully in the end.

"You have to make a judgement using forecasts that are wrong 40 percent of the time - the worst decision is to get the racegoers here, and then announce at 12.30pm that racing is cancelled!"

One issue that took more lateral thinking to conquer was that of low sun obscuring the jockeys' view of fences on steeplechase tracks, which has plagued many racecourses in recent years. STRI was commissioned to carry out a research project into avoiding disruption from low sun, which involved tracking the path of the setting sun across the course to identify when it was most likely to be an issue.

"We looked at all sorts of ways to block the sun to prevent the problem, from erecting screens to siting new buildings," Simon comments. "But none of these would have entirely resolved it. The best solution was to avoid running steeplechases in the low sun period, as hurdle races are affected less. We then had to extend this period in the 2007-8 season and we no longer run steeplechases from 2.40 to 4.00pm in the months of November, December and January. It makes the racecard look a little odd, but does the trick!"