3 A far cry from Fartown!

This year Huddersfield Town Football Club will be celebrating their centenary. The Galpharm Stadium, which they share with Huddersfield Giants RLFC, is a far cry from Fartown, their original home.

In the town where Rugby League was born, Association Football was, not surprisingly, a late starter. The FA had tried to wean locals away from the oval ball by staging an FA Cup semi-final at Fartown, the home of the Huddersfield rugby club, in 1882 but, despite a 6,000 crowd, it was not until 1907 that the first moves were made towards forming a professional club.

According to various accounts, playing at Fartown was one option considered by the founders of Huddersfield Town AFC but, from 1905 onwards, the Northern Union (as the Rugby League was then known) specifically discouraged ground sharing with football teams. Had attitudes then been more open, the subsequent development of grounds in northern England might have been quite different, particularly in Huddersfield where, of course, the two clubs now share a purpose-built stadium.

In 1907, therefore, the Huddersfield Association Football Ground Co. was formed and, with capital of £500, set about purchasing the site.

A pitch was laid out parallel to Leeds Road (that is, at right angles to the subsequent layout), and was ready to stage its first match, a local semi-final in March 1908. Six months later Huddersfield Town AFC was launched.

Its path to the present day has seen many stories unfold. Leeds Road was officially opened in September 1908 with a friendly against Bradford Park Avenue.

However, in 1912, the club sank into liquidation and followed that up spectacularly by doing the same in 1919! But, after much investment, the club had a revival and went on to reach the FA Cup Final in 1920, where they lost to Aston Villa, and win promotion to the top flight - Division One.

From gates of 3,000 before the 1919 crisis, within five months the Leeds Road terracing had to be raised in order to hold over 47,000 fans for a cup tie against Liverpool. Successive improvements would take this capacity to over 60,000 by the end of the decade.

But, for all Huddersfield Town's success and new-found status, improvements to the ground were surprisingly modest. A wooden 'Belfast' roof - later to be known affectionately as the Cowshed - was built over the Leeds Road End in 1929. The directors showed even less adventure two years later by purchasing a 1,300 seat stand from Fleetwood for just £170. That same season Town's Division One rivals Arsenal spent £45,000 on a stand!

But there was one unique feature at Leeds Road during the 1950s. Placed on the Dalton Bank End terrace was possibly British football's first electronic scoreboard, a gift from the Dutch company Philips, who had a factory in nearby Darwen and whose PSV Eindhoven team had close ties with Town.

Regrettably, it was vandalised in 1970 and replaced by a traditional manual board thereafter.

Less innovative, but rather more useful, was the arrival of floodlights in 1961, financed by the £55,000 transfer of Denis Law to Manchester City. In February 1962 two of the new pylons blew down in a gale - one embedding itself in the pitch!

Leeds Road capacity was then 52,000; a total which fell to 31,000 after the ground became designated under the Safety of Sports Grounds Act in 1984.

In 1989 the Cowshed was deemed unsafe and would not reopen for two years. Checks conducted after the Hillsborough disaster reduced Leeds Road still further to 14,000. With each failure and removal of a crush barrier, another little piece of the ground's former glory died.

Yet, ironically, life at Leeds Road brightened up at almost the same time as serious plans were being made to abandon the old ground. On 12th August 1992 planning permission for a new stadium was granted. Eighteen days later a foretaste of the new ground sharing era was provided when Huddersfield RLFC played their first ever game at Leeds Road, having left the now crumbling Fartown after 114 years.

Huddersfield Town played their 1,554th and final league game at Leeds Road on 30 April 1994. Blackpool were the visitors, losing 2-1, watched by a near capacity crowd of 16,195.

In 1994 Huddersfield Town and Huddersfield Giants RLFC moved in to the Galpharm where, for ten years, it was known as the McAlpine Stadium following a sponsorship agreement with the constructors, Alfred McAlpine plc.

The focal point of the 51 acre site is the uniquely designed 24,500 seater stadium which is home to the two sports clubs and was awarded the prestigious RIBA Building of the Year award for 1995.

The stadium boasts an impressive range of facilities including the Panasonic Stand which includes a purpose built Business & Conference Centre and a Community Health & Leisure Pod. To the south of the site lies a 30 bay Golf Driving Range with professional teaching facilities and a 1500 sq. ft. Golf Superstore. To the north of the site is a 9 screen cinema with over 2000 seats and associated restaurant/bar facilities.

Clearly, the stadium is like no other. And yet, the more you look, the simpler it all begins to appear. Each stand is shaped like an orange segment, and for good reason. Studies suggest that a majority of spectators prefer to watch closer to the centres of each touchline. It is also known that the optimum viewing distance for rugby and football is a 90m circle drawn from the centre of the pitch. Thus, to fit within this circle each stand assumes the shape of a slightly flattened semicircle. In addition, its unique design allows far more natural light onto the pitch than more conventional stadiums.

When the Galpharm first opened for the 1994/95 season only the two side stands were ready. The South Stand was opened three months later.

The stadium has also confirmed what many designers have been arguing for years, that good stadium design need not cost a fortune. The four stands, holding nearly 25,000 seats (including 254 spaces for disabled fans), plus car parks, landscaping and the golf range, cost around £28 million. 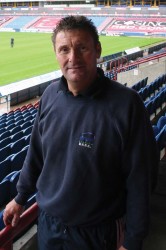 Huddersfield was the first club in the country to have the Desso Grassmaster fibre reinforced pitch system in 1996. It was laid by contractors, Hewitts, who are still employed to oversee the annual renovations along with providing ongoing support to the groundstaff.

Phil Regdwill is Head Groundsman, a position he took up when Rob Ellis moved on to work at Croke Park in Dublin. He is ably assisted by John Kazimierczyk who has worked alongside him for the past ten years.

With both football and rugby league being played at the stadium there is, inevitably, a crossover of fixtures during the summer months, with the football season running from August to May and the rugby league season from March to September. This leaves very little time for important renovations. This year's fixture lists allowed just a four weeks 'window of opportunity'.

It was during this window, in May, that Hewitts came in to undertake the annual renovation programme. Surface debris was koroed off to a depth of 13mm and thirty tonnes of sand was imported and levelled. The area was then overseeded with sixteen bags of Advanta MM60.

An inspection of the Desso system revealed that there is still 75% of fibres left in situ. However, a replacement Desso system has been earmarked to be installed in the summer of 2011.

Last season, well over seventy matches were played at the ground along with many training sessions.

The grass is cut between 25-30mm, the preferred requirement being 25mm for football and 30mm for rugby. A typical week's regime is:

Changing goals posts from one sport to the other usually takes a couple of hours.

Phil is keen to get the vertidrain on the pitch at least once a fortnight. Also, a regular brushing of the pitch helps stand up the sward and remove any early morning dew.

The feeding programme is based around regular soil testing that is undertaken every three months. A balanced NPK programme is in place to meet the needs of the sward. As with most sand based pitches it is about keeping the grass well fed, not allowing it to discolour or show signs of stress.
Having such an open ground the air circulation around the pitch helps prevent the onset of disease. Phil says that he cannot remember when he last had a problem with disease other than some minor outbreaks of Red Thread.

Being a dual sports venue Phil has the never ending task of overmarking one set of pitch lines with green paint while marking out the other set in white. Not surprisingly, he has two separate marking machines, one for each task.

Phil's biggest concern though is the warm ups and warm downs that tend to go on for 90 minutes or more on match days. He gets especially annoyed by the fast feet drills which take their toll on confined areas of the pitch.

Machinery at the club is fairly basic, There are two Ransomes Mastiffs, a Vertidrain, an Iseki compact tractor and a dedicated Iseki compact rotary used for cleaning the pitch up and mowing.

They also have a SISIS Litamisa to scarify the surface and clean up debris. Phil is currently looking into developing a brush system to attach to his mowers to help keep the base of the plant free of debris, thereby reducing thatch build-up. However, he does not want a brush that is too aggressive or has too many bristles that may cause more damage.

Phil is a keen cricketer and, for the past twenty years, has been actively involved with Skelmanthorpe Cricket Club where he still plays regularly. He also helps maintain the ground when he finds the time away from the football stadium.

He believes the secret to success in groundsmanship is basic knowledge and dedication. "To be fair," he says, "if I do ask for something and can justify its need, I generally get what I want."

His main challenge this year has been to minimise the damage to the pitch during the crossover period of August and September, both months being exceptionally wet. With a full season of football ahead, and winter on its way, a well worn, heavy pitch is not what he needs.