by Ruth Mosalki
in Football, Public Places, and Renovations & New Builds
on 17 May 2017 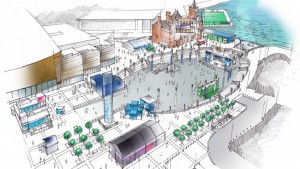 A floating football pitch is being built in Cardiff Bay as part of the Champions League festival, and will be open between June 1 and June 4.

Whilst there is always a football pitch built as part of the festival, this is the first floating pitch that has been built. On Friday, June 2, it will host the Ultimate Champions Match featuring footballing legends.

Building of the pitch began this week and is expected to last three days. Lorries are bringing the huge pieces of the base into the Bay and then a crane is lifting them into place. The pieces are then being connected together in the water.

In total, it is understood 200 different blocks will make up the main structure, which will be attached to the wall in a similar style to a pontoon. The 3G pitch will be laid on top, with net around the side.

Marc Diaper works for Coffi Co coffee shop in Cardiff Bay. Staff have been watching the pitch being constructed all morning.

"There's going to so many people down here for the festival as well as staff and the huge police presence. We're really excited that we can see it coming together now. It feels like it's real now. Until now it's all been speculation, but it's really nice to watch it going up".

The free festival is open to anyone and is expected to attract 200,000 visitors over the four days. Other parts of the festival include a gallery built inside the Wales Millennium Centre, workshops, a virtual arena and stalls and stands. Fans will also be able to have their pictures taken with the trophy for free.

The festival will close at 5pm on Saturday, June 3 and reopen again the day after the final.