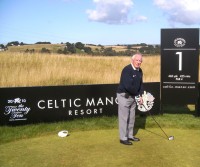 Last year Mick Shopland broke a unique golfing record, which was certified by the Guinness book of records for playing over 1000 different golf courses. It took Mick eighteen years and eight months to complete the record, finally completing the 1000th course at Celtic Manor "2010 Course" on the 7th August 2009. The 99th course was Royal Birkdale.

It is believed that another obsessive golfer took twenty five years to reach the same total, so Mick has comfortably beaten the previous 'record'.

Mick is now 76 years of age and still going strong, even though he is "disabled" with arthritis and can only play, using a golf cart or his buggy. He still regularly plays three or four courses a week, travelling around the country in his Motor Home with his golf buggy in an attachment on the rear.

His milestone journey began in the early 1990's when he began playing golf. During his prime he played rugby to a high standard representing the Army and Combined Services in the 1950's. In the 1960's he took up refereeing Rugby Football Union which took him to a high standard as an International referee taking control of matches all over the world including the Hong Kong sevens tournaments.

Initially he only played golf locally and around the U.K. whilst visiting his agents. In the first year he played 32 different courses. After his retirement from work in 1999 he has played 100 plus courses each year. His most prolific year was 2004 when he played a staggering One hundred and fifty six courses of which sixty one he had not played previously. This year 2010 he has even beaten that record by playing 157 different courses of which 84 courses he had not played before. 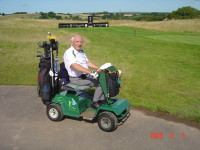 Mick's golfing career began with a fun round in Florida in 1990.with his wife, Dot. Their daughter , a low handicap "County Player" talked them both into playing golf, so they saw it as an opportunity to enjoy a pastime together. What began as a hobby for him soon became a full blown obsession which continues today? His record saw him play 86 in South Africa, 46 in America, 32 in Spain, 18 in New Zealand, 14 in Canada, Kenya, 12, France 9,Phillipines 9, Canary Islands 8, Italy 6, the Caribbean 1, England 582, Scotland 76, Wales 51 and Ireland 50 (Making the world record total of 1000)

Since setting the world record he has added another 89 courses: - 54 England 18 Scotland 3 Wales and 14 South Africa.

During his rugby tours to South Africa, New Zealand, Italy, Canada, France and America. Mick made many friends and after his retirement Mick and Dot visited his touring destinations to the above mentioned countries as holiday's to meet up with these friends who organised a lot of support by arranging "Courtesy Golf" during his golfing campaign.

Mick's achievement was aptly aided by the generosity of many people and a number of UK golfing companies, Crown Golf , DeVere Hotels, Q Hotels , Marriot and Macdonald hotels all have allowed Mick and Dot the opportunity to play their courses free of charge plus a Golf Cart and provided some much needed refreshments.

Mick has meticulously kept records of every single course, every scorecard, and even every shot played. Mick mentioned he has found over 4000 balls whilst playing and lost some 1500 over the last ten years. His best round of golf was in a competition at Hawkstone Park, on 11th September 2000, when he shot a gross 77 off the white tees on the par 72 course. With his handicap at the time of 15 gave him 41 points stableford which won him a place in a "Major Competition at Royal Porthcawl".

Unfortunately the sponsoring company failed to inform him the date of the competition until 3 days after the event. This error upset him and he has still not had a chance to play at this magnificent course. Mick now plays off a handicap twenty.

One of his most memorable experiences was when he went to play the Santa Barbara GC in the Philippines to celebrate their "Centenary of golf". Mick and Dot were treated like royalty during their time there - a St George's flag was raised on their arrival at the course and lowered as they left they were saluted by the guards on every visit Mick and Dot were equally shocked when they found out they were playing in a six ball group accompanied by six caddies, three umbrella girls and two chair carriers. 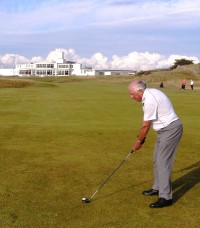 The other four players were "The former President of the Philippines, Fidel Ramos". The Chairman of the Centenary committee, The Managing Director of the club and a businessman who had volunteered to be our chauffeur for our holiday. The chair carriers were for the over 70's to sit on the edge of the green whilst the others were putting out.

.After meeting up with Mick and seeing the passion he has for the game of golf, he will certainly be carrying on with his remarkable quest to play as many courses as he possible can while he is still fit and able, no doubt he will conquer even more records in the coming years.

It is certainly keeping him and his wife Dot active and the opportunity to travel around the world. He said he would like to play Royal Porthcawl, the other two courses at Celtic Manor and the two St Pierre courses that he could not play in 2010 because of bad weather.

With over 3700 golf courses in the UK , Mick still has plenty to play, so keep an eye out for him, i am sure he will soon be playing one of your courses in the near future. If you want him to play your course you can contact him on the following number 07736202108 he would provide a very interesting after dinner talk on his world record and experiences seen out on the golf course.

During the 19 years of playing golf he told me that he had noticed how much of an improvement there has been in the quality of the greens and fairways, A lot of clubs have reduced the areas of rough and trimmed a lot of the lower branches of the trees.

This helps the higher handicap players, as, trying to play a ball out of knee deep rough is often impossible. Some courses in the past have laid the course out mainly for the single figure players, which is less than ten percent of all golfers. The improvement of machinery and green staff has helped considerably. Several courses now have machines that rake the bunkers very quickly.