"I've just seen Jonathan Agnew. He looks so different in real life than he does on the radio!"

When an opportunity to visit the SWALEC Stadium, for the first day of the first Test of summer 2011, presented itself, yours truly got the gig, partly as I live closest to Cardiff out of the Pitchcare team, and partly because I am a self-confessed 'cricket nut'. The invitation was extended by Keith Exton, who is now in his third year as Head Groundsman.

Having never been to the SWALEC before, it was another Test ground I could tick of my list. The scale of the work Glamorgan County Cricket Club has undertaken to achieve Test status is remarkable. The ground has much to offer. For starters, access is a doddle, with motorway or dual carriageway almost right to the car park; and there is plenty to swallow up all manner of vehicles, from coaches, double decker busses and trucks to executive cars and beyond.

The external grounds are in immaculate condition and, as you might expect, everything feels 'new'. Once inside the perimeter of the stadium, the same is true. 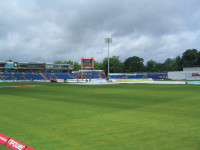 Keith had told me, the day before, that the Met office were forecasting heavy rain up until lunchtime, but suggested that, often, the rain shoots up the valleys and completely misses the stadium. This day it has decided to hit the whole of South Wales. Crossing the Severn Bridge and driving into Cardiff required wipers at double speed on occasions.

I was to search out Keith on arrival. That was not difficult, as he and a team of nine were out in the middle mopping up, even as more rain fell. This was at 10.15am, and the team had been out there since 7.00am! The outfield looked immaculate, even though the dry weather leading up to the Test had exposed evidence of the recent drainage work.

There was no prospect of play in the foreseeable future, but it was announced, a number of times, that the umpires 'would inspect again at ...', 'the toss would take place at ...'. 'play would start at ...'. And, even though there were now breaks in the cloud, heavy showers kept sweeping across the ground. Every cover removal was greeted with applause and cheers, every one put back on, with boos. I had the urge to rush out and help, but Keith would have had little need for a graphic designer, who could probably only tell him that his covers weren't quite parallel!

The ECB had laid on the usual extra curricular activities, including a question and answer session with Jeff Thomson, Mike Gatting, Gladstone Small and Alec Stewart, with Tommo getting serious flack about the demise of the Aussies ... beware the wounded beast!

After the players and officials had taken an early lunch, the covers began to come off, the hover cover was shunted sideways off the match strip, and stump cameras and Hawkeye paraphernalia were hastily installed, with the toss set for 2.15pm, and a start of 2.45pm promised. Even as the toss was being completed, the rains came down again, soaking Messrs. Atherton, Dilshan, Strauss and assembled cameramen and photographers, and the covers went back on. This was though, the final flurry of the day, and play eventually got underway at 3.30pm, with the hover cover the last to be removed at 3.28pm.

I had the misfortune to sit in front of three young doctors - Tim Nice-But-Dim and his two colleagues, Jim Nice-But-Dim and Tarquin Nice-But-Dim! As Keith and his crew struggled with the conditions, they spewed out comments such as; "Just get the covers off, it's not raining!", even though heavy clouds were approaching; "I'd tell that Grant Flower a thing or two", and, when the batsmen had taken a quick single, "Where's Chris Tremlett gone?", who had been fielding in front of us for right handed Dilshan, but moved for the left-handed Paranavitana. They did come up with one classic though; "I've just seen Jonathan Agnew. He looks so different in real life than he does on the radio!"

Having been out on the square for over eight hours, I thought it prudent to allow Keith some time to gather his thoughts, grab a cup of coffee and, perhaps, a power nap, before finally introducing myself. At just after 4.00pm, I made my way to his office to find him hovering over his computer looking at a weather map. "This one looks like it might get us," he said, pointing at a dark swirl of cloud heading across Pembrokeshire. Fortunately, that one did 'shoot up the valleys' and play continued uninterrupted (apart from a twenty minute break for tea in glorious sunshine), until close.

Keith, not surprisingly, looked a tad 'knackered'. His team had worked tirelessly and efficiently to ensure some play was possible. In truth, before the introduction of modern covers and drainage, the amount of rain that fell would probably have resulted in play being suspended for the day. The outfield, with its new drainage system, coped remarkably well, given the amount of water that had fallen on it. 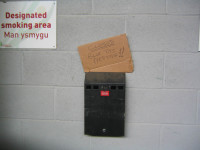 As I left Keith's office to return to my seat, I passed a closed off area, which turned out to be a designated smoking point where blue tits had taken up residence in one of the cigarette bins. I stood and watched for a while as both parents rushed back and forth to feed their demanding brood. It was, possibly, the highlight of the day as, in truth, the cricket was rather uninspiring. The England bowlers, with the exception of Swann, looked under cooked, and the Sri Lankan batsmen played without their usual panache, possibly due to the cold and windy conditions. Even then, they amassed 133-2 in the forty-eight overs available.

The Barmy Army (including their trumpeter) did their best to enliven proceedings, and a rousing 'Land of My Fathers' was greeted with cheers by the Welsh contingent in the half full stadium. At the close of play at 7.00pm, Keith and his team headed back out to the centre to complete the final clean-up of the wicket and put the covers back on. My guess is that they wouldn't have got away much before 9.00pm, finishing off a fourteen hour day!

FOOTNOTE: Three of the remaining four days followed a very similar pattern, with Keith and his team working tirelessly to ensure cricket could be played. In the end, it proved more than worthwhile, with England grabbing an unlikely innings and fourteen run victory in the final session of play on the final day.