Shrewsbury Town Groundsman Richard Barnett is delighted with the improved quality of lines on the club's New Meadow stadium pitch from use of the Graco Fieldlazer S90 MKII and Maxline paint. Richard was part of the team that won the Football League's, 'League One Groundsman of the Year' award in 2016 and believes using the same model Graco line marking machine that was used to mark out the world cup final pitch in Brazil has added 'the cherry on the cake' when it comes to pitch presentation.

"I started using the Graco Fieldlazer S90 at the start of the 2015\16 season following a recommendation from Dave Saltman and quickly adapted to the side mark feature after previous experience of using spray markers with front knibs. 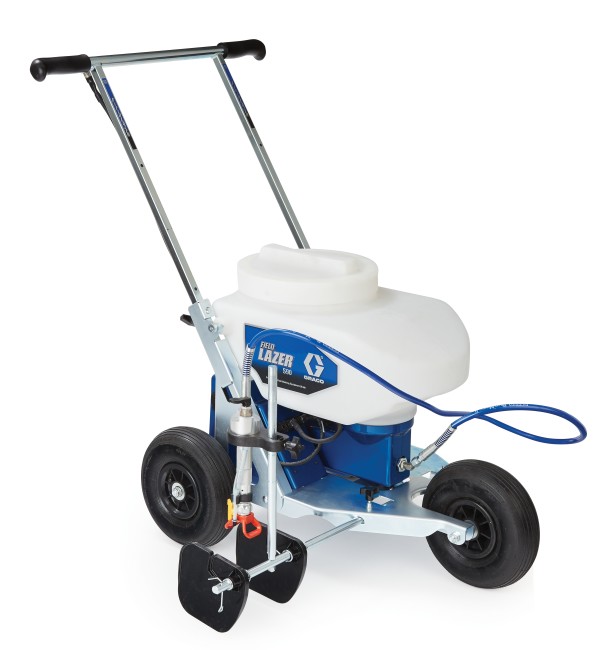 We have used Maxline Platinum paint diluted at 2 or 3 parts water to 1 part paint and the Maxline Lazer One Shot neat, throughout this season, both providing us with great results. What was noticeable was how the pressure (900 bar, 62psi) output atomised the paint particles and provided significantly more coverage of paint onto the leaf of the turf plant, with lines applied being much more visible and defined than we have had from previous lower pressure spray markers. The system is fantastic and has halved our paint usage, saving money while improving presentation. For stadium groundsmen looking to achieve the best standards, or for clubs looking to save money on multiple pitch mark outs I wouldn't hesitate in recommending the Graco."

For further information and exclusive offers see the Graco Fieldlazer S90 MKII. Demonstrations and trials can be arranged by calling 01952 897912.