0 A new sport, with new opportunities 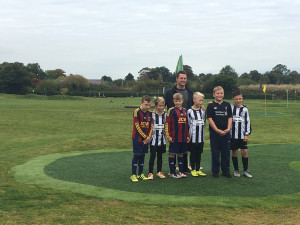 When Chester-based property development executive, Mike Bell, found himself playing a start-up sport in Portugal, he brought the idea back home, attracting a deal of attention in the area, including a prominent local boy - one Michael Owen

Mike Bell, co-owner of Chester Footgolf, had been helping to develop businesses on the city's Parkgate Road site over a ten year period. His company's development of a care home there had been a success, and a couple of acres of the greenbelt land were up for rent. After his inspiring visit to Southern Europe, he took the most of that opportunity, and obtained a new ten year lease in order to launch the area's first Footgolf enterprise.

The sport is sometimes said to have originated near where Mike came across it, in Alicante, Spain, being the brainchild of ex-Barcelona attacking midfielder Juan Manuel Asensi Ripoll. But, more demonstrably, it was codified and formalised in the Netherlands in 2008, a revolution credited to Dutch footballer and politician, Michael Jansen.

It grew quickly, and UKFootgolf, our national governing body of the sport, was founded in 2012 by another of the sport's early pioneers, Mike O'Connor. UKFootgolf licenses, aids and governs around 171 courses like the one at Chester. They say that the sport now has around 10,000 active players, just four years into its British life. 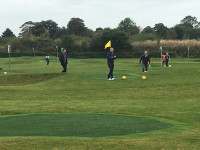 In this young sport, players tee off from a designated area, each with their own size 5 football, and attempt to sink it into an oversized golf cup in as few 'shots' as possible. UKFootgolf, as well as the Federation for International Footgolf or FIFG (the international governing body), provide full rules on their websites. The easiest way to picture it is: it's pitch and putt golf. Just swap the clubs for a leg, the golf balls for footballs, and the tiny holes for huge ones.

The Chester Footgolf course backs onto a now-derelict golf club with impressive views, full of a wide range of trees and grasses, and undulating fittingly through the Cheshire countryside. The golfing pedigree, therefore, came with the location. Clearly though, a new target market was likely and, again, the location proved useful to the owners. The hybrid sport has proved popular in recent years as a team-building exercise for company staff, and a starter activity on stag and hen weekends. Within the catchment area of this site however, there is a host of affluent primary schools, as well as a remarkable 253 youth football clubs.

Mike told us: "We run a lot of promotions through the local schools. One thing we do is offer taster sessions. We've also polled the kids and the adults after these. We asked the children 'Who would come back and play Footgolf again?', and they'd all put their hands up and say 'Yeah!' And we asked the teachers and parents 'Who thinks the kids have enjoyed the day out?', and they raised their hands too. We get really good feedback."

The degree to which the nature of the sport suits young people is blatant upon standing and watching as the youth football teams make their way around the course. For one, it is significantly shorter than a round of golf. Many modern children and young people, with places to go and home entertainment to soak up, refuse to 'waste' four hours on a single sport. Nine holes of footgolf can take as little as forty-five minutes, if you're young enough to sprint the whole way.

In addition, the statistics tell us that more kids play football than golf. And, watching the sport, it makes sense that some aspects of golf should appeal to that same market. It's broken up into attention deficit-friendly portions, there's no goalkeeper to prevent the glory of the ball going where you put it, and it's very goal-oriented (that is: you score on every hole. There are no nil-nil draws in footgolf).

The layout was designed by celebrated golf course architect Howard Swann, whose portfolio proudly lists such institutions as Stirling Golf Club, Scotland and Golf Course Bled, Slovenia amongst its clients. Accordingly, the greens and 'bunkers' (which are, thankfully, not filled with sand) show some creativity and do provide a varied experience throughout the nine holes.

The greens are cut from artificial turf. Mike argued his case: "It's really important, because it'll keep the kids coming here through the winter. They don't want to be kicking the ball around on damp, cold grass when the weather gets bad."

This winter-proofing of the business was something he seemed quite keen on, and he has also used the rest of the space available to set up some football nets, with faith that all of those hundreds of kids will need somewhere close by to practise and enjoy themselves when their teams' facilities are in their off-season. He added: "The footgolf might die down a little when it gets colder, and we wanted to offer something the kids could do while they want to keep warm and active. So we've used that top corner there as a proper football area and set some nets up."

This was, he says, another motive behind opening the course originally: "You know: diabetes and obesity are on the rise so much now. It's a big thing everywhere that people are encouraging young people to stay active and do useful things with their time. We partly did this because of that. It's a good way for them to keep playing all year round."

Mike explains that they have one person for mowing, plus another who comes in from Four Seasons. "They're both contractors; one small, one large. It is just like golf course management actually, only with bigger holes. The first guy mows the fairways, rakes the bunkers and strims around the greens. The guy from Four Seasons does the spraying and the weed and feed every now and then. And he also does the main outfield in the football section with a tractor mounted mower."

For the footballing area, the club have been offered advice and services on turf maintenance. There were plans to use reclaimed soil to bed the five-a-side pitch, but this soil is now waiting to be put to better use. To help with their all year round philosophy, they now have good quality turfing soil underfoot, which will prevent the ground from hardening too much during the cold months, helping to avoid any potential injuries to the young footballers.

For many of the same reasons Mike sees the promise in dedicated footgolf courses, he warns that the sport could have an adverse effect on existing golf clubs: "There are courses around now that have individual holes alongside their practise putting greens. What you get is the young lads who go for a laugh to play footgolf for just a few minutes actually end up kicking the balls at the people trying to putt and it creates a lot of difficulties."

The course launched in May 2016 and, just five months later, on a chilly October Saturday morning, up rocked ex-England striker Michael Owen and greeted the owners as friends. He arrived at exactly the planned tee-off time of 9:30am, and stayed for a round, much to the delight of the dozens of youngsters (and a few older Liverpuddlian supporters) who had turned up to see him play. 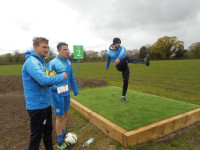 With all eyes on him, as they had been for most of the hour-long round, he eventually stepped up to the 8th tee. It appeared to be roughly 80 yards from tee to flag. He raised his leg with a back-lift very familiar to many watching, and gave it a little more effort than on the previous holes.

The shot only had a few yards of airtime, and rolled for what seemed like an age over bumps, the lip of a bunker, and finally, more slowly towards the heart of the green. Reminiscent of Tiger Woods at the 2005 Masters, the ball hovered on the lip for a second or two before dropping.

The crowd, including perhaps thirty of us sat on the patio benches, erupted. Mr Owen celebrated as if it we were The Kop. The consensus on that patio seemed to be 'there might be something to this sport'.

We stopped him after the round. When asked how much he had riding on the score, he said with the slightest flicker of embarrassment: "A fiver." And, when pressed as to why he had chosen that day to make an appearance, simply added: "I was just here to win some money off these boys." At least he won the petrol to make it back home. 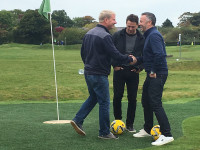 The luxury clientele shows how exciting the introduction of a new field game is to people. Such is the promise that the business shows at present, in fact, Mike Bell also informs us that he has already made bids for an additional five sites and hopes to convert them all into Footgolf courses.

The sport is growing, seemingly very quickly. In fact, if it continues to grow at its current rate, it promises to become a genuine new niche for many in grounds maintenance. These entrepreneurs may take some persuading that grass should line their greens instead of artificial turf, however.