by Charmian Robinson
in Industry News
on 29 Oct 2010

0 A new STP and MUGA have now been completed at Yarm Pre-Preparatory School three weeks ahead of schedule! 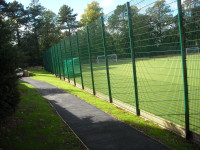 works comprised of the construction of a new STP and MUGA, netball and cricket nets along with all associated drainage connections and landscaping and although limited access to the site proved to be very challenging.

This is the second contract awarded to CLS by Yarm Pre-Preparatory School after completion of what was described by Alan Hodgson, Estates Manager, as a 'Superb new state-of-the-art sports facility' MUGA comprising tennis, netball and cricket wicket in 2008.

The second installation comprised of the construction of a sand dressed synthetic MUGA, two netball courts, a nature trail footpath with some play equipment and a 3 bay cricket wicket. All the facilities were to be built on the green field site of the original old school field. This presented a number of issues such as limited access. A single width lane had to remain open to the public throughout the construction period. 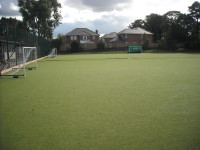 The success of the MUGA is dependent on several factors, not least the quality of the synthetic carpet laid. In this instance a Play Rite carpet dressed with 18mm sand was laid on an 18mm in-situ rubber shock pad. All the lines to define the different sports areas were painted onto the surface. The cricket wicket bays were also fitted with cage surround and nets.

Extensive works to the original and newly proposed drainage schemes had to take into account planning restrictions regarding the outfall rate and a hydro-break needed to be fitted to reduce the output. In addition all the drainage was engineered to act as attenuation to meet official requirements.

Despite the degrees of difficulty and complexity of the task of Cleveland Land Services still completed the project three weeks earlier than originally scheduled. They received specific praise from the head teacher of Yarm School who declared that he was very impressed with the attention CLS paid to the stringent health and safety aspects throughout the contract while working in a particularly challenging environment.