0 A touch of reality 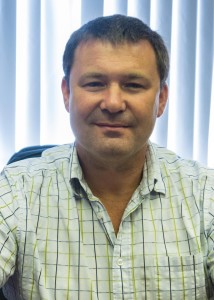 By now, our magazine subscribers will have received the latest tome and, whilst I don't write about our achievements very often, since this issue represents our 50th edition, I thought I might indulge in sharing some Pitchcare history.

How important the publication, and the wider Pitchcare offering, has been to the industry can probably best be summed up by the testimonials we have received on reaching this milestone. You can read some of these sprinkled liberally within the magazine; they come from all sectors of the industry.

I vividly remember sitting down with my collective team of five in a small office in Wolverhampton, in spring 2005, to discuss the future of the business. We had, at that time, around 8,000 members, and a small but growing online hub that offered help and advice freely, alongside competitive products in the shop.

We viewed our business as an online resource and we were in the market for an advertising sales person. Somewhat unexpectedly (as I'm sure he'll agree!), Peter Britton was also in the market for a new opportunity. After meeting over a beer or two (what else), it quickly became clear that not only did he have great ad space sales acumen, but his experience of publishing an industry hard copy magazine was also a strong suit. Despite our reservations, Peter was clear that, as long as we could provide content, he could manage the rest.

It was clear that a magazine of technical substance was required for the whole turfcare industry.

Our initial remit was pretty straightforward; to promote the industry from the grassroots to the very top of our profession. What was not so straightforward was our desire not to publish any press releases in the magazine. Our view was that readers immediately switch off if they see the same press release and images reproduced in a variety of titles; after all, you only need to read that "Fred Smith bought a mower and he uses it" so many times!

Press releases were, therefore, retained just for 'news' on the website, whilst the magazine developed its motto to be a 'great read from cover to cover'.

As we already had Laurence (writing) Gale on board producing articles and diaries for the website, we had a readymade editor. He was excited (when isn't he?) about the new venture so, whilst Peter busied himself seeking advertising support and designing the initial layout for the launch edition, Laurence sourced a few extra articles.

Within a few weeks we had enough initial advertising support and articles to publish and be damned!

And so, in July 2005, a slim 52 page issue landed on the desks of groundsmen and greenkeepers, and it proved an instant hit. 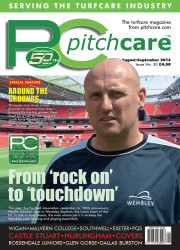 As the magazine has grown in size, we have remained true to our original remit and, to highlight the point, our fiftieth issue features Tony Stones, the Head Groundsman at Wembley, alongside Chris Shufflebottom, the volunteer groundsman at Rossendale Juniors FC - they don't come more diverse than that.

In the eight years the magazine has been published, we have probably run Laurence ragged. He, in return, has taken more photographs than any sane person should - thank heavens they no longer need developing otherwise we'd be bankrupt - and we have a team of writers helping to provide articles from all corners of the UK and further afield.

Similarly, the Pitchcare website recently celebrated its 50,000 member, 80% of the membership being UK based. We have always had the largest online shop in the industry and we continue to work with our partners to deliver the only Lantra accredited industry training courses.

Importantly, but quite scary too, we now employ sixty-five members of staff, most of whom work out of our headquarters at Allscott Park, near Telford which is our seven acre site with around 50,000 square feet of insulated warehousing. We also are training up youngsters via the Government's apprenticeship scheme; our sixth started only last month.

Of course, none of this would have been possible without the support of our advertisers and sponsors, so a huge thanks goes to them and, of course, our magazine subscribers.