by Dr Christian Spring
in Consultancy
on 19 Nov 2008

0 A turn of fraise The control of Annual Meadow-Grass on professional football pitches

Football pitches are usually sown with perennial ryegrass as the dominant grass species due to its hard-wearing nature and favourable playing characteristics. However, it is not long before light green patches of annual meadow-grass can be seen in the sward. Indeed, in as little as three years after construction, it can be the dominant grass species on a pitch. As such, the spread of annual meadow-grass on newly constructed football pitches continues to be a common and persistent problem.

Annual meadow-grass, despite being a species which is tolerant of heavy wear, does have a number of undesirable characteristics. These include a tendency to 'kick out' in the form of divots, the unsightly patchy nature of the sward, it is susceptible to Microdochium patch disease and it can be associated with the formation of a thatchy surface layer which can affect playing quality.

The rate of annual meadow-grass spread depends on pitch usage levels, management and renovation practices. In the past, it has been controlled using both physical (e.g. scarification) and chemical (herbicide) techniques. Physical control has been based on cleaning the surface as much as possible during the renovation process, before sowing with the desired species. Chemical control has been hindered by: a) finding selective herbicides that do not damage the other grass species in the sward; and b) the ever-decreasing number of permitted herbicides.

With support from the Professional Football Association and Campey Turf Care Systems an experimental trial has been carried out at the STRI over three football playing seasons. The objective was to investigate the relative effectiveness of mechanical and chemical treatments to control the spread of annual meadow-grass on football pitches.

At the end of each playing season the trial area was renovated and oversown, then, after the grass had germinated, chemical treatments were applied. The trial was based at the STRI trials ground where an area was prepared using a sand-dominated rootzone similar to that at many professional football clubs.

The area had been used in the past for other trials, therefore it was likely that there was a significant seed bank of annual meadow-grass present. In addition, material from annual meadow-grass infected rootzone cores was spread over the area. The trial was sown with a mixture of three perennial ryegrass cultivars. 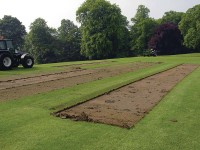 Three sets of treatments were included as outlined in Table 1. The physical treatment consisted of the preparation and renovation of the soil using a Koro Fieldtopmaker, which has a series of rotating blades and has the ability to remove arising debris using a conveyor system. The fraise mowing treatment comprised removing the herbage from the top of the pitch, whilst the deeper treatment went down to a depth of 18mm, thereby removing the vegetation and the immediate surface layer. The material removed by the deeper Koro treatment was replaced using a matching sand-dominated rootzone.

In addition to the physical and chemical treatments, the effect of over-watering on the spread of annual meadow-grass was investigated. The individual plots received either conventional watering to replace evapotranspiration losses, using a Toro Trident irrigation controller, or were over-watered by 30% above the conventional irrigation rate.

Wear was applied during the football playing season, twice a week using a differential slip wear machine. The aim was to simulate grass cover loss through the central areas of a pitch.

The botanical composition of the plots was recorded three times during each football season. Assessments of total live cover of the plots were recorded on four occasions during each playing season. Additional measurements were made on playing quality, including ball rebound, hardness and traction. It was noted that, after the first year of ethofumesate applications, the two 5 litre per hectare treatment appeared to have a phytotoxic effect on the perennial ryegrass, the proportion of perennial ryegrass dropping to 66%, with the amount of bare ground and dead grass reaching 34%. This effect was not seen in those plots treated with only one ethofumesate application or for either treatment in the two following seasons. No reason has been identified to explain the phytotoxicity on the perennial ryegrass on this single occasion.

Both physical treatments affected the playing characteristics of the surface. In 2004-05, following two sets of pitch renovation, hardness and ball rebound values were significantly lower for the non Koro treatments than for the deep Koro and fraise mown plots. This was almost certainly the result of the build up organic matter at the surface on the untreated control plots. Traction, a measure of the amount of grip available to the player, was also found to be significantly greater in the fraise mown plots during the last playing season as compared to the non Koro treatment.

The main findings from this trial are: