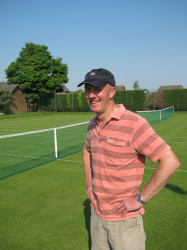 "There was no appetite to move away from natural grass. Despite the fact that members had to play elsewhere in the winter, they loved playing on grass during the summer months"

I moved to Norton in Hales when I was nine years old, and can remember back over the last forty-odd years of the two grass tennis courts being used for periods and then, eventually, falling into dereliction.

Going back even further, there have certainly been grass tennis courts here for at least eighty years, as we have trophies at the club dating back to 1933/34. The two tennis courts are part of the local recreation ground which consists of a cricket table and outfield, a bowls green and a children's playground.

The recreation ground is self managed by the three sports clubs, with volunteers, like myself, looking after the specific grounds work, whilst employing the services of a local contractor to keep the surrounds of the area under control.

So it was, about twenty-three years ago, that a group of locals, keen to play tennis in the village, decided to recommission the overgrown and derelict tennis courts. We raised some money and replaced the surrounding fencing, whilst cutting down the undergrowth and then digging over and re-grading the courts. They were then reseeded and fertilised. The view was that, if we had tennis courts, we could attract some new members, raise more funds and, after two or three years, afford to have them resurfaced with either tarmacadam or similar hard surface for all year round play.

Well, we did attract new members and had a reasonable amount of money saved after this period. However, when we put the idea to the members, there was no appetite to move away from natural grass. Despite the fact that members had to play elsewhere in the winter, they loved playing on grass during the summer months. 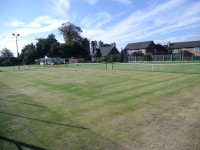 So, that's where we've been at for the last twenty years, maintaining these two grass courts with fairly limited funds and limited knowledge.

For a long time, the two courts were simply mown and marked out during the season. They received little or no end of season care, until about eight years ago, when some limited aeration was introduced into the schedule.

The courts were in decline and every season the bounce became lower and the levels more uneven as the thatch built up. The lack of end of season renovations meant the playing surface just got bumpier too, resulting in balls going off at all angles when they hit the ground.

It was decided that the poor quality of play on the courts would contribute to the club starting to lose some of its fifty strong membership, so plans were put in place to seek advice on the health of the playing surfaces. 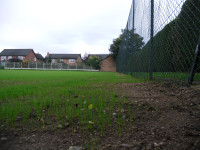 We called in a local agronomist, who took a few samples out and showed us the build up of thatch within the turf. The thatch was over 25mm thick and we were told that scarifying was no longer an option to bring the courts back. Given the poor general levels, it was recommended that we remove the existing vegetation and cultivate the soils underneath to alleviate the compaction. The samples of soil were analysed by the agronomist, and these showed a reasonable level of clay loam which would provide a reasonable bounce, but allow good drainage as well.

Once cultivated, the courts would be re-graded to much better levels. The soil analysis also showed that the pH was quite acidic too and this was also to be rectified during the works.

We obtained quotes from contractors but, even with our saved funds, the prices were over and above what we had available. Fortunately, one of the members is a local farmer, and so we agreed with him that he would strip off and cultivate the tennis courts first, and then the contractor could work the levels, consolidate the ground, seed and fertilise. 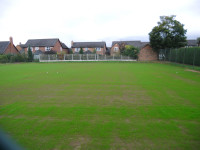 Work commenced on the 14th September 2011. We took the gate and panel out of the surrounding fencing and removed the tennis net posts on the courts. The sockets were marked to avoid them being hit and disturbed by the heavy machinery. The surface was stripped off using a Hymac and the spoil removed to infill a field somewhere locally. Next came a very large tractor and a 3m wide power harrow. On the instruction of the contractor, this machine was set to a depth of 75mm and we went over the two courts four times to break up the soil. There never seems to be a perfect state of play with the weather; whilst the ground was dry, making it easy to cultivate, it was so dry that the soil just turned into powder.

The contractor arrived two days later and applied powdered lime to bring up the pH, and a slow release fertiliser to help provide longer term nutrients to the establishing grass. The tractor-mounted stone rake was then used to grade and consolidate the surface levels and mix in the lime and basal feed.

Being so dry, the soil wouldn't compact so, with the levels adjusted, the contractor decided to apply the seed, followed by a light rak 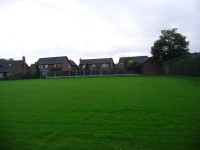 e before 25kg's of pre-seed fertiliser was also applied.

With the early autumn weather staying hot and dry, it was then up to me to try and get the prepared courts saturated. This involved daily visits to the club, to turn the water on and then move the sprinkler around the courts periodically. I spent a lot of time watering and worrying. It took quite a lot of watering to get the penetration I needed.

The grass seed was a dwarf perennial rye mix and the contractor had said that the seed would be up in seven days. I remember looking at the courts on the Friday afternoon the following week and not seeing any grass germinating. The next morning, as I drove onto the recreation ground and around the cricket outfield, I noticed a green hue on the tennis courts. As I got up close, I could see the shoots of grass standing tall at about 5mm above the ground.

By the middle of October, the grass was establishing nicely across the courts, and I gave them their first cut using a rotary mower. With the unusually warm and dry autumn, the grass grew quickly and I ended up cutting the courts six times before Christmas at a height of 25mm. We had a small outbreak of fusarium, and the 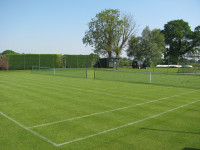 grass started to show signs that the fertiliser was coming to an end in December, so I applied a turf hardener and the grass over wintered very well.

In April, the contractor came back to vertidrain the courts, a job that he'd been unable to carry out during the renovation due to the dryness of the surface. The vertidrain not only helped decompact the subsoil, it also took out the slight bumpiness that was evident in the surface when I mowed.

It was planned to open the courts on the 19th May this year; normally we would aim to open at the beginning of May, but had allowed a little extra time for the courts to recover. That said, we could have opened at least a week earlier, but I decided that the extra time for the grass wouldn't hurt given that members were already resigned to a later start.

The last couple of weeks before the start of the season, I worked the mower height down to 12.5mm. It's our playing height and, whilst a little longer than say, Wimbledon, it helps protect the grass. 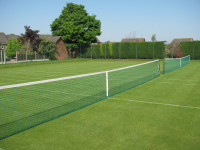 As I write, we are two weeks into the season and there are no visible signs of wear yet on any of the base lines. I will keep this height of cut unless I get a lot of complaints.

So far, everyone has expressed their delight at the far improved quality and consistency of bounce, as well as the firmness of the ground. The root growth is down to around 150mm and, apart from some worm cast damage, the courts look like new.

As a volunteer, I'm very happy to receive all the praise; it may now be a good while before I hear members moaning again!