Aberdeen boss Stephen Glass will kick-start his first full season in charge on a new pitch after Pittodrie was resurfaced. A pitch renovation has been completed to provide Glass and his new look squad with the ideal surface for the quick passing, attacking football the Don boss aims to deliver. 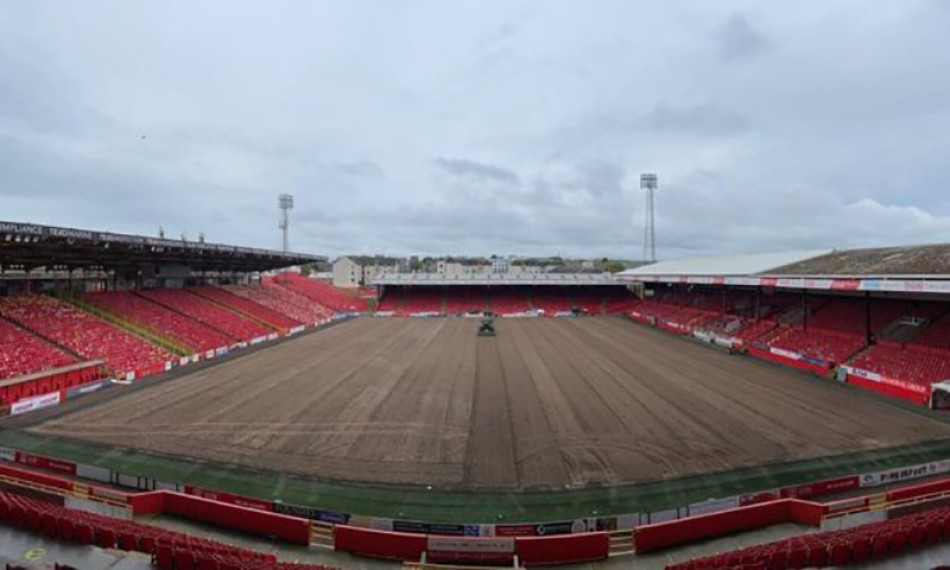 Pittodrie pitch is being resurfaced for the new season. Supplied by Aberdeen FC

Glass' Dons will play on a state-of-the-art Fibresand surface when they begin the new campaign in the Uefa Conference League second qualifying round next month.

Aberdeen confirmed the cost of the work on the pitch is 'significant' but it is an investment the Pittodrie board believe is crucial to deliver the right surface for Glass and his team to thrive.

Between 20mm to 50mm of the surface has been removed depending on the damage caused by factors such as algae that builds up throughout the winter months.

The work was originally scheduled for last summer but had to be delayed due to the coronavirus pandemic and the lockdown. 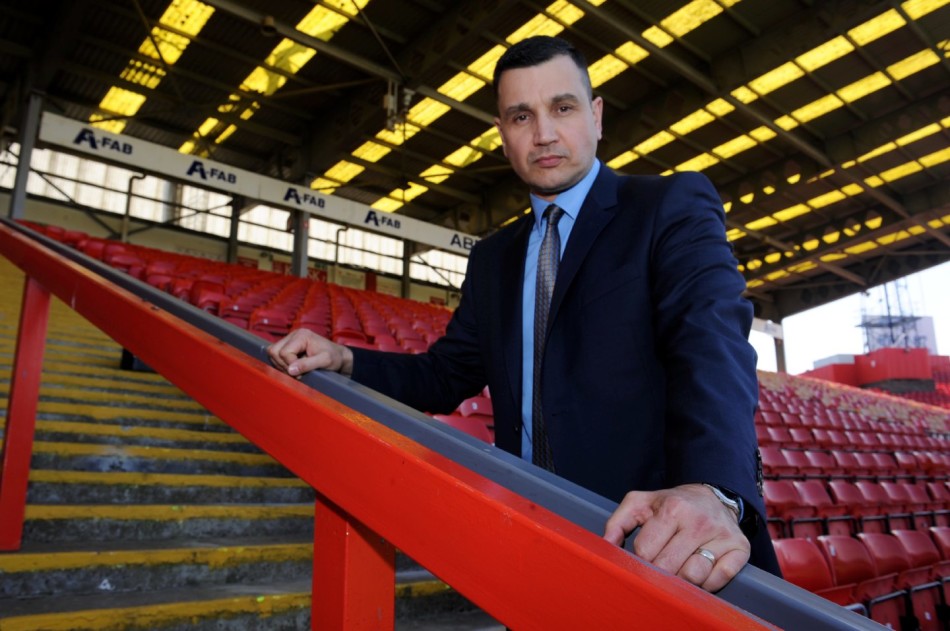 Stadium manager Paul Hendry said: "A full pitch renovation was due to help stabilise the Main Stand wing and remove the surface damage, algae and black layer of organic matter that builds up over time and throughout the winter months.

"This prevents the grass from getting water and sunlight resulting in a lack of growth and a poor playing surface. This work was stopped and prevented due to Covid-19 and the lockdown."

"The head groundsman carried out a series of small inhouse pitch renovations to bring the pitch back to a suitable playing surface and see it through the winter months."

"This was successful however, surface damage, algae and organic matter does not disappear completely unless a full pitch renovation is completed which involves killing weeds and foliage removal."

"Ultimately the pitch surface must be removed anywhere from 20mm to 50mmm depending on surface damage and the black layer of algae."

"This season to ensure that we have a playing surface suitable and worthy of a professional football team we have had to complete this renovation in full adding fibresand for stability and reseeding the pitch with elite sports grass seed."

"Then we simply monitor, water, apply fertiliser and hope for lots of sunshine! The costs are significant but it is an investment we believe crucial to ensure an optimal playing surface for the team." 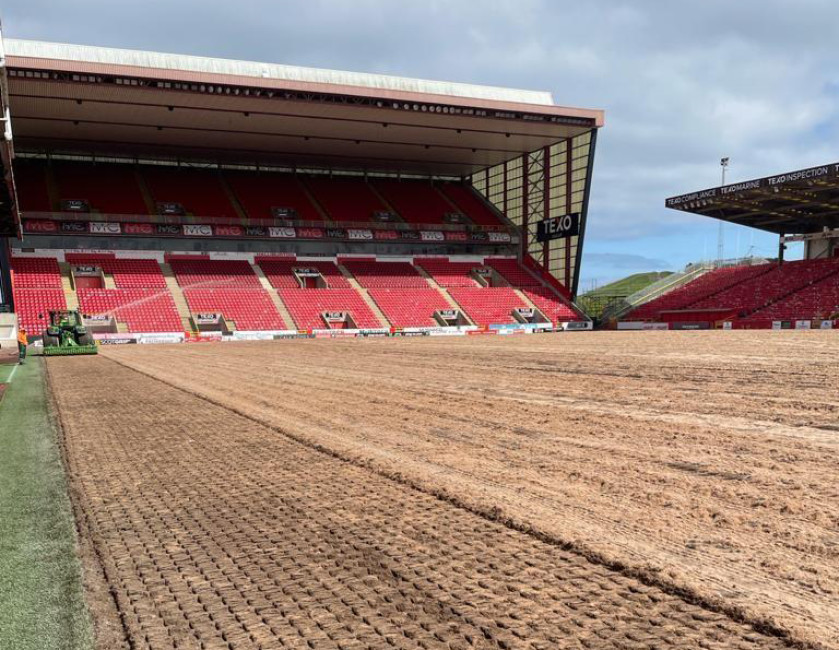 The Pittodrie pitch is being renovated in preparation for next season. Supplied by Aberdeen FC.

Hendry confirmed the work is not as extensive as in 2013 when Aberdeen ripped up the pitch in a complete reconstruction.

The club budget for an annual renovation of the playing surface and the extent of the work varies year on year depending on a number of factors.

Hendry explained: "This isn't a full reconstruction as per 2013.

"We budget for renovations every year. Each year the renovations can change and what is necessary is based on the season overall such as how many games have been played, European games and training requirements."

"Come the end of the season clubs who wish to maintain a high standard of playing surface must accept that the pitch has done its job and carry out renovations."

"Beginning the season with a new pitch offers the greatest opportunity for the surface to withstand the difficult environment it is expected to perform within." 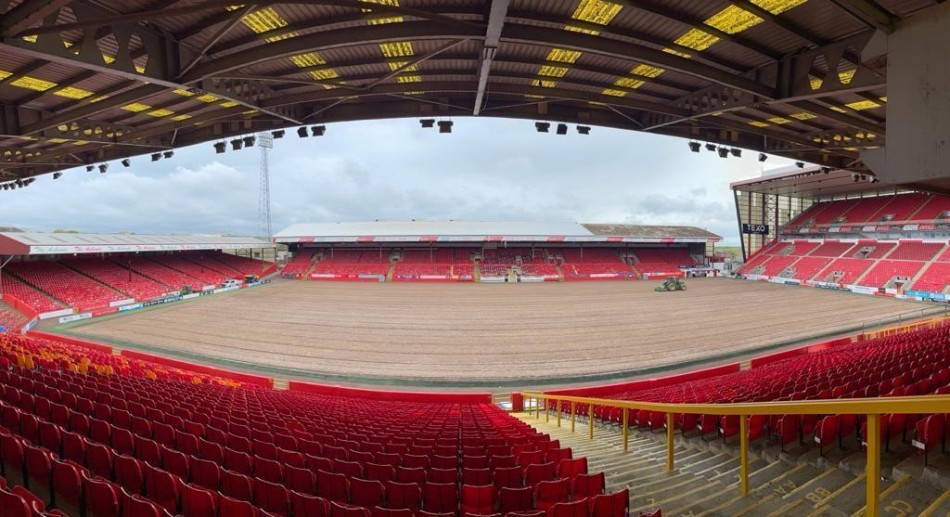 Work undertaken to renovate the surface at Pittodrie. Supplied by Aberdeen FC

Aberdeen are confident the new surface will withstand not just more than 20 home games in the upcoming season but also the harsh winter weather in the north-east.

The surface is also more resistant to divots which will aid a passing game.

Hendry said: "It's a fibresand pitch which is reinforced silica sand products that provide extra stability to the turf surface. Polypropylene fibres, and elastic fibres for Fibrelastic, are added in a random distribution throughout the sand. This produces a very cohesive material."

"This in turn reinforces the rootzone, resulting in a tighter surface that is more resistant to divots. A fibresand, well-draining pitch, will no doubt offer the best surface for any style of football and provides the stability that players often prefer."

The previous surface will not go to waste.

Hendry said: "Where possible we recycle the surface and this may be used in and around Pittodrie or our training ground's amenity areas."