Richard Norton is responsible for overseeing all three sites at Bolton Wanderers, liaising with his staff on a daily basis to resolve any problems and arrange any materials that are required. He has nine full time staff, and a further eight part timers who help out on match days.

The Reebok pitch is maintained by Mark Sinnett, with Chris Simm and Calum Bunce looking after the Chorley facility. The academy training ground, and the main subject of this article, is maintained by Gareth Lester, Michael Steele, Niall Hazlehurst, Nick Regan and Nathan Brierley.

John Crossley is the club's gardener and is kept busy looking after all the informal garden areas on both the academy and first team sites.

Over the last ten years, and particularly during their time in the Premiership, there has been a significant investment in the facilities at the Reebok stadium. Clubs at Bolton's level have embraced the latest technologies, such as pitches reinforced with Fibrelastic, Fibresand or Desso, whilst lighting rigs, undersoil heating and watering systems have become the norm.

Equally, investment in training grounds has soared. Many clubs have replicated their stadium pitch at their training ground to ensure that players can train on an identical surface, and Bolton are no exception. 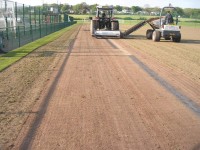 Richard has been instrumental in overseeing the completion of a five year plan to provide some of the most up-to-date playing surfaces available.

In 2007, the club invested in a Desso Grassmaster system and SGL lighting rigs at the Reebok, as well as embarking on the development of the new academy training facility, The Eddie Davies Football Academy.

An initial investment of over £3.5m secured a forty acre site at Lostock, close to the Reebok, which now houses over 70,000 square metres of sand/soil based pitches, a full-sized Fibresand pitch and one the largest 3G synthetic pitches in Europe.

The first phase saw the construction of the sand/soil based pitches on the upper plateau. The area was stripped and levelled, then drained at five metre centres and an automatic irrigation system installed. A further 75mm of sport sand was added and ameliorated into the top 100mm. The area was then reconsolidated and the final levels established. A pre-seed fertiliser was applied and then the area was sown with a Johnsons Premier rye seed mix. After establishment, gravel slits were installed at 1m centres across the full width of the plateau. 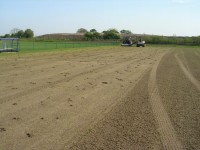 Also constructed in the first phase were the Fibresand and 3G pitches, the latter built using Desso Pro Challenger 50 carpet. All of the phase one works were carried out by Mallinsons Sports Ground Contractors.

Part of the ninety-six mile long Thirlmere Aqueduct runs through the middle of the lower plateau, so the second phase was split into two stages. The aqueduct required remedial repair work, carried out by United Utilities, which involved the installation of a haul road and access holes across part of the lower plateau.

The first area was sprayed to kill all vegetation. Drainage was installed at 3m centres, followed by stone burying. 75mm of sand was applied, which was power harrowed, reconsolidated and levelled and then sand slit using a Blec Sand Master. A pre-seed fertiliser was applied before sowing with the rye seed mix. The following year, the remainder of the lower plateau was completed using the same techniques. All these groundworks were carried out by Souter Sports Ground Contractors.

Five years on, the academy pitches continue to be used on a daily basis by the club's under 8s through to under 18s, and also the reserves in the last two years.

Since the academy site has opened, usage has grown from approximately 8,000 people in the first twelve months to over 20,000 last season. This includes use by Bolton Wanderers Coach Education, Bolton Wanderers Community Trust and other groups. This high usage means that Gareth and his staff are constantly on the go, preparing and repairing pitches. Their working hours are Monday - Friday 8.00am to 5.00pm and Saturday and Sunday mornings from 8.00am to 1.00pm. In reality though, it's all about getting the job done, however long it takes!

The academy pitches are mown using a Toro 6500D, Toro 2000D mower and a Dennis G860 cassette mower, maintaining a cutting height of 25mm, cutting daily during the growing season. All pitches are marked out on a weekly basis or as fixtures demand, this is done using a laser guided marker ensuring lines remain accurate and straight.

At the end of each playing season, Richard embarks on a rigorous renovation programme on a number of the club's pitches. He does not have a bottomless pit of money, so often has to prioritise which ones are renovated and to what degree.

As you would expect, the stadium pitch is the number one priority. At the end of 2011-12 season, after a few weeks of corporate events, the pitch was sprayed with a total weedkiller, allowing time for this to kill the grass before the contractors came on site. The pitch was koroed in two directions, with a modified spiral rake attached. Forty bags of ZeoPro were applied, after which it was Pro Cored. Pre seed fertiliser was applied, and then the pitch was topdressed, followed by a light raking to true the levels, vertidrained and seeded with Johnsons Premier. These works were carried out by Premier Pitches.

As for the pitches at the academy ground, all on the lower plateau were fraise mown in two directions, raked with the Wiedenmann between each pass with the Koro, raked again and the cleaned up using a Trilo vac, topdressed with 440 tonnes of sand, vertidrained, pre seed fertiliser applied and then seeded in one direction using a Blec disc seeder, and in another direction using a Blec multiseeder.

The remaining pitches on the upper plateau have had a lighter renovation. This involved weekly raking and scarifying since early March to start to remove the meadow grasses. Once all the activities on these pitches had finished, they were heavily scarified in three directions. 240 tonnes of sand were applied to the area, with special attention paid to linesman's runs, goalmouths and any other worn areas. A pre-seed fertiliser was applied followed by oversowing with the rye grass mix, and vertidrained. Similarly, these works were carried out by Souter Sports and the Bolton Wanderers staff.

High quality academy and training grounds are crucial to the success of a top flight football team. Long gone are the days when clubs just had their home grounds and a small training facility.

All Premiership, and most Championship clubs, have invested millions of pounds in state of the art stadium pitches and their training grounds to cope with the demands of modern day football. Academy and training grounds are becoming very important assets for professional clubs, with the emphasis placed on the quality of facilities on offer. The better facilities you have to offer, the better players you are likely to attract.

Richard is well aware of the money the club have invested in their facilities in recent years, and has worked hard to build up his experienced groundstaff who, year after year, strive to improve the quality of the pitches.

Let's hope these continued improvements encourage the current group of players to make a speedy return to the Premiership.