by Keith Nicholson
in Football, Machinery & Mechanics, and Chemicals & Fertilisers
on 24 Sep 2021

Colin Galliford, Head Groundsman at Woking FC, has long relied on a wide range of products and machinery in order to maintain the superb playing surface currently enjoyed by players, staff and supporters of Woking FC during a 30-year tenure. 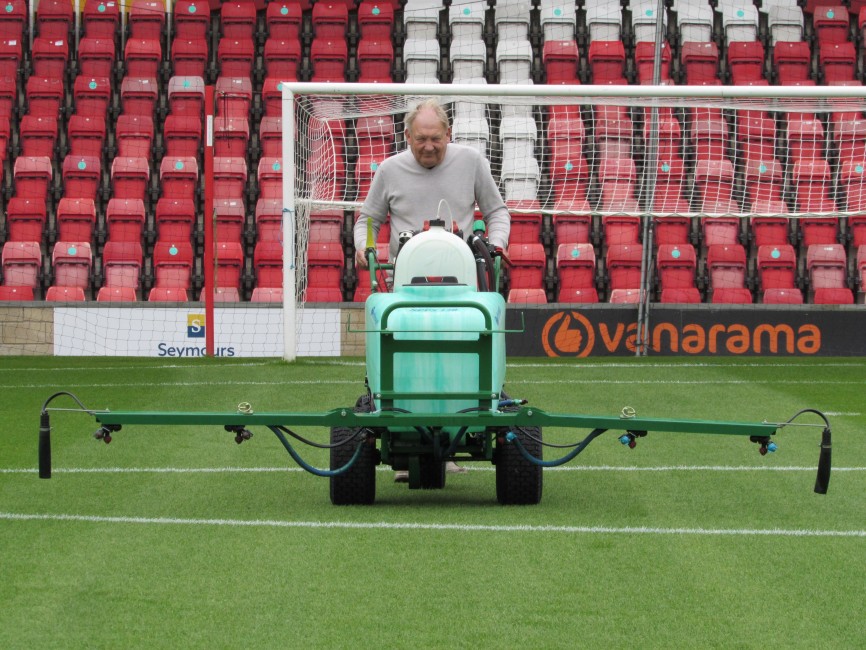 Says Colin "There has always been a direct link between the performance of the team and the condition and integrity of the playing surface and, in professional sport, where the margin between victory and defeat can often be slim, I need to support the football club by making sure that the playing surface is always at its best".

For many years, a key tool in Colin's armoury has been the SPPS ultra low ground pressure sprayer, a pedestrian sprayer from Cambridgeshire based manufacturer Techneat Engineering. Now on his second SPPS, Colin is happy to confirm why he believes the machine has served both him and Woking FC so well.

"We've recently purchased a second SPPS replacing the first one that we bought just over 10 years ago and there's little doubt that it ticks all the boxes. Manoeuvrability is excellent with a Honda 5.5hp engine providing ample power to propel the sprayer via the front wheels through an efficient clutch drive system. The machine's foam bout marker is a great accuracy aid and removes the need for dyes which we used to use prior to investing in the first SPPS. Although there are many options available on the SPPS we have always gone with the 3m folding boom which copes well with some of the narrow passageways within the stadium, the spray control lever that improves the sprayers performance and the larger 120l tank which saves time on refilling.

"Beyond the pitch itself we also deploy the machine to maintain other grass surfaces around the stadium complex and, depending on overall pitch usage during the season, we would normally use the SPPS to spray root stimulant and turf care products such as amino acids, chelated iron and molasses along with weed treatment and worm control chemicals around once or twice per week. Reliability is therefore critical and it's here where the SPPS has really excelled with only one instance of a broken drive chain in the last 10 years that I can recall" he adds.

So, from an operator's perspective, what are the key challenges for the Colin and the SPPS when it comes to maintaining the Woking FC pitch?

"The Woking FC stadium is quite open on three sides presenting the occasional challenge of swirling winds and, even when using an ultra-low ground pressure sprayer like the SPPS, less favourable spraying conditions can create the additional need for a boom cover to enable me to continue spraying without having to wait for calmer conditions. Fortunately, a boom cover is available as an additional option on the SPPS so that problem can easily be overcome via an upgrade" he says.

Is there anything he'd add to the current specifications or options available on the SPPS?

"The SPPS has been a great machine for 25 years but, whilst it has established a very good reputation for its solid performance and reliability, technology and design improvements never really stop. Looking ahead I think there's a potential case for upgrading the machine with a forward and reverse gearbox so the operator can avoid walking where the product may have just been applied. However, that aside, I'm extremely satisfied with the consistent performance it delivers week-in week-out" concludes Colin.

Responding to Colin's design suggestion, Techneat Operations Director James English says "Due to the ease of manoeuvrability on the SPPS we have never felt the need to add a reverse gear to date. However, we always listen and fully respect the feedback from customers".