0 Adding a splash of colour to golf courses

The sowing of colourful flower mixtures can cheer up town roundabouts, parks and gardens, and the out-of-play areas on golf courses. They not only brighten up the view, they also have environmental benefits - attracting bees and insects through the summer, and providing feed for birds in winter. Moreover, this is a low cost option that is easy to maintain.

Two head greenkeepers who have seen benefits in adding colour to their courses and creating wildlife-friendly habitats, are Kim Blake of Fulford Heath Golf Club near Birmingham, and Andy Laing of Gaudet Luce Golf Club, near Droitwich. With advice from Matt Gresty of Limagrain UK and Mark Allen of ALS, they've been able to establish a range of flower and environmental mixtures which have been beneficial to their clubs. 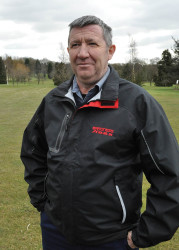 Kim Blake is the course manager at Fulford Heath Golf Club. Prior to this, his career path has been somewhat unconventional. He began in the industry by gaining a distinction in Greenkeeping on the first ever course held in the UK, at Moreton Morrell College in 1976, and worked at Gay Hill Golf Club and then Broadway Golf Club. But, after five years, and finding it difficult to get a first assistant post, he diversified and found himself milking cows for a local farmer.

Following that, Kim took up agricultural contracting, whilst in his 'spare time' growing vegetables in four acres of rented greenhouses. In 1988, Kim returned to the greens, taking up the post at Fulford Heath. The agricultural experience has certainly stood him in good stead, and he prides himself in having a good head for economics and efficiency.

Kim explains: "I've quite a modest budget to manage the course, so I'm always looking for ways to improve efficiency and cut costs. It's all about getting the right systems. This comes from experimenting and seeing what actually works in practice."

Six years ago, Kim persuaded the club to invest in a composter for grass cuttings and the waste from the clubhouse. "We can now make around 150 tonnes of topsoil, which is then mixed 2:1 with medium coarse sand to make the divot mix. Not only can we make topsoil for £14 a tonne, instead of buying it in for £26 a tonne, it's also a better product," says Kim.

Establishing conservation areas to encourage wildlife is one of Kim's interests. He used to put out seed in feeders to encourage the birds. But, remembering the game cover crops he used to sow in his contracting days, he changed four years ago to sowing game cover mixtures with plants which naturally provide seeds for birds and small mammals through the winter months. He uses a spring sown mixture - which includes dwarf sunflowers, and which draw positive comments from members - and an autumn sown one. So, the conservation areas no longer have to be mown, and there are more birds and wildlife around the course.

The sowing of decorative flower mixtures at Fulford Heath was prompted by a particular area of ground which was never an attractive feature.

The relief car park is surrounded by a bank of stony and poor soil, so it is hard to get good grass cover.

Kim explains: "Nettles would flourish there through the summer, and need regular strimming. We tried sowing a red and white clover mixture with vetches to develop low level cover, but it looked awful. The wildflower mixtures we tried never developed into a good display either."

In 2010, Limagrain's Matt Gresty suggested Kim try out a decorative flower mixture from a new range of annual mixtures called Colour Splash which were being launched that year. Kim chose Douce France, a mixture containing Cosmos, Zinnia, Cornflower, Marigold and Eschscholzia. This mixture grows to a maximum height of 50cm which was an important factor for Kim, who needed to maintain visibility across the course.

Matt explains: "These annual flower mixtures are very easy to sow and maintain. They not only provide very attractive colour from mid-June onwards, they are also a lot cheaper than traditional seasonal bedding plants." 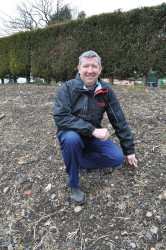 "On an annual basis, it costs around £15-20 per square metre for bedding plants, taking into account the costs of seedbed preparation, fertiliser and the planting and weeding by hand, and irrigation. By comparison, these flower mixtures don't need fertiliser, and only a small amount of preparation to generate a seedbed. Once established, they shade out any weeds, so no further work is needed. So this option can cost less than £1 per square metre."

At Fulford Heath, such was the popularity of the flower mixture in the first summer that golf members wanted some for themselves. Seeing an opportunity, Kim had 20g of seeds decanted into wage packet envelopes, added a label with help from Limagrain, and then sold them in the club shop!

"Even now, our members frequently comment on the colour of the displays. And, what really impresses me, is that they will keep flowering all the way into the middle of November," says Kim.

Establishing the flower areas is a simple low maintenance process. The selected areas are sprayed off in February with glyphosate, and a landscape rake used to make a tilth. Only 2g of seed is required per square metre. So, Kim mixes it in a 50:50 ratio with zeolite, to ensure an even distribution when sowing.

"The areas aren't huge, so we hand-sow the seed mix. I actually think it's quicker and more accurate. And the zeolite makes it easy to see where the seed has been sown. We go back over the ground with the rake and then roll the ground. We aim for the seed to be just under 1cm below the surface."

"The flowers have a high visual impact and give some seasonal variation to the course," adds Kim. "It's also a very low cost option, which is important to us."

Last year, around five acres was sown to the one meadow flower mixture. This year, Kim intends to try some mixtures from the newly expanded Colour Splash range, which have been specifically designed to provide habitats and food sources for bees, butterflies, insects and small mammals.

With bee populations in decline, Kim has also been interested in flower mixtures which would provide a source of pollen and attract bees. In 2011, he sowed a mixture containing phacelia which attracts bees, as well as clovers, sainfoin and birdsfoot trefoil. The phacelia creates a very purple show of colour - and also gets positive comments from members. 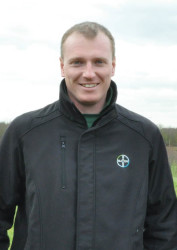 This is a small industry, and shows and events through the year are a great opportunity to discuss challenges and ideas with fellow groundsmen and course managers. At BTME in Harrogate 2012, Kim, and Andy Laing from the relatively new Gaudet Luce golf course, found themselves talking about their experiences with flower mixtures and conservation mixtures.

Gaudet Luce Golf Club opened in 1995, and takes its name from a coat of arms found inside the original farmhouse at the site. Andy Laing joined full time in 1999 after working part time at the site since its construction. He then took on the role of course manager in 2004.

This club is also keen to take an eco-friendly approach to the environment. New trees and hedges have been planted to create habitats for wildlife, and a composter is used to recycle tree and grass cuttings, along with cardboard and other green waste from the site.

The club is very close to residential areas of Droitwich, and several footpaths have been made through the course which the general public are encouraged to use. This is considered not just good PR for the club, but also helps swell the numbers of social members who come to spend money in the clubhouse. 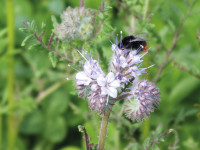 "This is a fairly open course. We don't have the established oaks and ash trees, like some of the older clubs," explains Andy. "We also have a lot of out of play areas, and open areas in between holes which require a lot of mowing through the season."

"We thought establishing some colourful flower areas would improve the look of the course - for players and visitors. The flowers would be good for the bees, and provide habitats for insects and small mammals. We tried some wildflower seed mixtures in 2011, but weren't happy with the results. And then I bumped into Kim at BTME who invited me over to his course to see what he'd been doing."
Flowers at Gaudet Luce

After a visit to Fulford Heath last year, Andy went ahead with sowing a variety of mixtures across nearly two acres of the Gaudet Luce course.
Game cover mixtures and environmental mixtures, which were specifically formulated to provide seeds for birds, and pollen for bees, were sown on the larger out of play areas. "These mixtures aren't particularly aesthetically pleasing in the second year, so we will re-sow after the first year," says Andy. 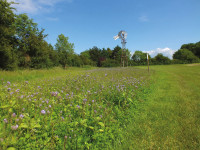 As well as sowing Douce France like Kim, Andy also tried another Colour Splash mixture: Jour de Fête. This mixture reaches a height of just over one metre, and contains Cornflowers, several Cosmos varieties and a new variety of Zinnia which flowers several times through the season.
"These flower mixtures provide colour - not just around the clubhouse - but also against the in-play areas, sides of walkways and backs of tees. They also look good either side of the walkways between holes. These are areas we would otherwise have to mow."

"The flowers have generated a lot of comments from our own members and visitors here during open competitions, especially from the Ladies and Seniors," he comments. "They are a talking point and make people appreciate the course. As for the wildlife - despite the poor weather last year, we saw a huge increase in bees and insects." 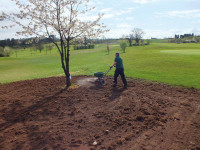 To establish the new flower areas last year, Andy first sprayed off the grass in March and then left it for 10-15 days before rotovating. After another 10-15 days, it was sprayed again to kill off any emergent weeds. The Colour Splash seed mixtures were mixed with kiln-dried sand in a 400g/25kg ratio, and sown in the second week of April using a fertiliser spreader.

"After sowing, we chain-harrowed the ground before rolling. But we won't this year as there were a few areas where we think the seeds may have been buried too deep. Instead, we will attempt to hand rake the areas lightly before rolling."

"Once established, the plants outcompete the weeds, and there's zero maintenance required - no fertiliser and no herbicides." 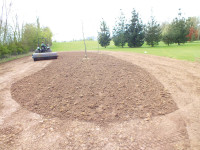 For this year, Andy will be keeping the game cover and birdfeeder mixtures rolling on into the second year, for the benefit of the wildlife. And he will re-sow the Colour Splash and bee mixtures.

Andy adds: "One of the main reasons for trying the flower mixtures was that we wanted to have something new and different for the course. And now it's been such a success, we're going to continue to dedicate more areas to flowers! I'm very much looking forward to trying out some of the new mixtures in the range this season!"