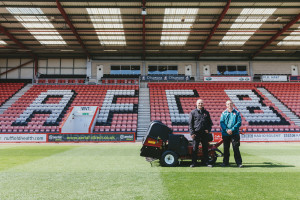 AFC Bournemouth's newly renovated pitch has just been nominated as one of the top three in the Championship - a feat that Cherries' grounds manager James Lathwell says is thanks, in part, to the club's Toro ProCore aerator.

Having loaned a ProCore 648 prior to the Goldsands Stadium pitch renovation last summer, James explains that it worked so efficiently, he has now made the decision to purchase one.

"We trialled the Toro ProCore from Lely UK at a time when we were having issues with the old pitch. Last season's heavy rainfall meant we were really battling with the elements, but the ProCore kept the football ground playable throughout wet periods and saved fixtures," he says.

Although renovating the pitch has helped alleviate this problem, with new pitches prone to compaction, James is as delighted with the ProCore's results on the old and new pitch alike, and he's not the only one.

"We've been receiving compliments all year on the new pitch," says James. "After every game, the referee and away team manager score the pitch. There are three teams with the highest scores at the end of the season and we've been nominated as one of the top three in the Championship, which is a great testament to the ProCore."

As well as helping maintain a quality pitch, the quickness of the machine is what stands out for James. "It does such a good job in a small amount of time," he says.

"We used to allow a day to aerate the pitch, now we only need 3-4 hours. This is a huge time-saver considering we aerate after every home game. We've also found it's very quick to change the tines, taking just 15 minutes."

Designed as a two-step process, the ProCore's new Titan QuickChange tine head provides increased flexibility when tines need to be changed and dramatically reduces the time spent on tine change-out.

Alongside time-saving benefits, clean-up is also easier and less labour intensive with the ProCore; an additional benefit that hasn't gone unnoticed by the club's groundstaff. "Our previous aerator created a lot of mess. With our new machine, there is no mess, which is fantastic for myself and the team," James adds.

With time and labour saved and a pitch that's now one of the best in the Championship, James concludes that the club's ProCore purchase has proved to be a great investment.